Horses are among the most iconic of creatures on the planet, and integral to the development of human civilization. Cavalry and horse races, horse-crazy girls, farm horses all parade through our histories. But in our modern day, many people see them as just boring animals.

With this list I hope to cultivate some interest in those who don't really care for horses, and of course, to please those who already do.

While this list is in no way exhaustive, nor are these breeds unique, they are interesting, and I hope you enjoy reading this as much as I enjoyed writing it. The Akhal-Teke is one of the oldest breeds, developed in the deserts of Turkmenistan before 1600 AD. While some say they are mean-tempered, they are undoubtably among the best horses for endurance and have been used in countless breeding projects to try to enhance other horse breed’s gene pools.

Probably the most notable feature of the Akhal-Teke is the metallic sheen to its coat. Although it is present in all coat colors, it is most prominent in buckskins and palominos. Arabians, another ancient breed from the Middle East, dominate the world of endurance riding. They were developed by the Bedouin nomads for long rides under the hot sun. So valuable were these horses that the nomads would take them into their tents at night to guard against theft.

Fast and strong for their small size, Arabians can sometimes stand below the threshold of pony-horse height, making an exception to the rule needed, or some Arabians would be ponies. This quirky breed is under some dispute over where it was developed. But the Bashkir Curly is apparently content to remain an enigma, its calm, even temperament is well loved amongst Curly owners.

Their name comes from the unique gene gives their coat, mane, and hair a strange twist. While it's not quite noticeable in summer, when the winter coat comes out, it’s hard not to notice.

Come claim the Bashkir Curly to be the only hypoallergenic horse but this has yet to be proven. One of the smallest breeds of all time, the Falabella gets its name from the family that bred it. The notable thing about this breed is their size: full grown stallions are seldom taller than 34 inches (eight hands) at the withers. However, they are not considered ponies, simply miniature horses.

While Falabellas are too small to be ridden by any but the smallest children, they are excellent jumpers, and can clear obstacles as high as they are tall. When the Spanish explorers arrived in America, they took horses with them. These were the ancestors of the mustang. While the mustangs lived (and continue to live) in a human-free environment, they are not wild, rather they are feral, due to their domestic ancestors.

Over half the population of mustangs can be found in Nevada, although there are also significant numbers in Montana, Wyoming, and Oregon. The largest of all horses, the Shire towers over most men, the withers of an average stallion measure in at over 68 inches tall (17 hands).

The Shire horse has its beginnings in the dark ages, as a steed for knights whose heavy armor required the strongest of horses to carry them in battle. As gunpowder took the center stage of war, the Shire was quietly retired to draft work, and is now primarily used for pulling carts and loads. The Shire is also a popular marketing tool for ale breweries. There may be zebras and kiang, but the only truly wild horse left in the world is Przewalski’s horse, named after the Russian explorer Nikolai Przhevalsky.

Przewalski’s horses are generally small, with a stocky build, and dun in color.

The Przewalski’s horse almost went extinct in 1945, but they were saved by 9 horses held in captivity in zoos. In 2011, only 300 lived in the wild. Despite the misleading name, this horse was bred in the Appalachian Mountains in Kentucky. This breed is sure-footed and easy-going, and loves people.

The Rocky Mountain Horse is one of the few horses that holds the right genes to have a chance of a “chocolate coat”, a silver-dapple gene on a black coat.

Though developed for draft purposes, the Rocky Mountain’s ambling gait makes it a comfortable trail horse, its primary use now-a-days. This little fellow hails from the Shetland Isles, standing no higher than 44 inches (11 hands). Bred for draft work, the ponies found their early years filled with carts and plows. In the mid 19th century, coal mines found that Shetland ponies fit their needs well and, until the close of the last pony coal mine in 1971, Shetland ponies were coal mine ponies.

Today, Shetland ponies are favorite steeds of children, and make good pets. As they are considered very intelligent, many people train them as guide horses (like guide dogs).

Shetland ponies tend to be headstrong and cheeky, and the trainer is required to keep them well in hand. The most famous show horse, the Andalusian horse or "Pure Spanish Horse", is among the most athletic, and enjoys learning new moves and new tricks.

Up until recent times, Andalusians were war-horses, expected to be strong, enduring horses for carrying knights into battle. While cavalry has fallen out of fashion, the Andalusian has not, finding a niche in entertaining the masses with its incredible agility in synchronized horse shows.

Horse Breeds on a Map 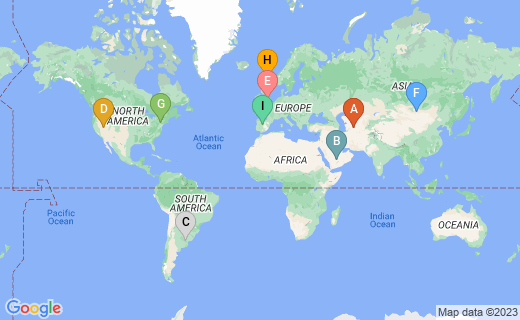 Which of These Horses is Your Favorite?