10 Reasons to Get a Husky

There's nothing wrong with wanting a flashy pup! If you love to hear "What a pretty dog!" and "Wow, what a beautiful fur baby you have!" then you will love owning a Husky. While they come in a wide variety of coat styles, they are all striking in appearance. And it certainly doesn't hurt when they have those ice blue eyes, or even the heterochromia version where one eye is blue and the other brown. These pups are also one of the most easily recognizable breeds in the world.

Have you ever owned a Husky?

These dogs are absolutely clowns. Whether they are yelling their displeasure at your decisions or just being overly dramatic about going to bed, they always, always seem to be gushing personality whenever you interact with them.

If you're lucky, you get a Husky with a face like my Husky's. His face brings a smile to every single person who sees him, and it sure adds to the entertainment value when he does have mischief on his mind.

They can also make a very good addition to your pack if you're looking to re-energize your current fur buddies. Most Huskies will be youthfully energetic for a good portion of their lives which leads us to our next pro-Husky point!

For those who are very active outdoorsy types, you will absolutely want to get a harness style restraint for your Husky. They aren't called escape artist for nothing! And that professional escape skill isn't limited to your backyard. They also seem to be able to pull right out of a traditional collar and leash so you will want a great quality, and hopefully, indestructible harness for your Husky hiking partner. 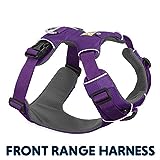 RUFFWEAR - Front Range Dog Harness, Reflective and Padded Harness for Training and Everyday, Tillandsia Purple (2017), Medium
Huskies are amazing escape artists. You won't want to throw a traditional collar and lead on them and head out into the wild blue yonder. They are also notorious for having bad recall, but instead, when they find a bit of freedom, they tend to run, and run, and run, as far away from you as fast as possible. While you may be able to lure them back with a treat, you should always have your Husky microchipped before you venture away from home. Once you do venture away from home, you're going to need a very secure and rugged harness to keep up with your pup and to keep him or her safe. The harness will also prevent your Husky from pulling, something many tend to do due to their intense need to run fast and far. The comfort of the harness is critically important so make sure to measure your pup before you order one. Many brands do have extra padded frames so that your Husky doesn't get any raw or hot spots from the harness when engaged in highly energetic or repetitive activities. Keeping your Husky well-exercised is one of the most important elements of ownership for this breed.
Buy Now

Huskies seem to naturally adore children. Infants, babies, toddlers, young children, teenagers, or just adults with a big kid living inside of them, Huskies LOVE children. Maybe it's because they stay young at heart themselves. Most Husky's stay very puppy-like until into their second year. If your child wanders off, I assure you, you'll find them with a Husky right next to them. I'm not sure if you can call them a babysitter breed like you can breeds like the GSD, but they are definitely a partner-in-crime breed and will stay next to your children if for nothing else than the chance to get into whatever mess your kids are heading for.

They just love everyone. It goes without saying that you may end up with a rare Husky who doesn't like anyone, but that would be a rare Husky indeed. More likely, you're going to end up with a dog who treats every visitor you have like they are a long-lost friend. Your Husky may even want to rub their neck all over your visitors to mark them with their scent. That's just the Husky's way of saying, hey, in case you forget, when you come in this house, you're mine. And they will treat you like you're an instantly accepted part of their pack.

6. They Are a Unique Experience Even For Seasoned Dog Owners

You'll often here people talk about their dogs by calling them their best friend. Husky's do enjoy being thought of as your best friend, but they also want to be your partner, not your pet. It's a unique relationship you'll find yourself in when you have a dog that is too smart and shrewd to be happy with a pat on the head every morning.

My Husky and many of this breed want to be your EQUAL. These dogs are smart, and they are wily, and unless you learn how to ask them to do things, rather than order them to, no treat in the world will talk your Husky into following basic instructions if they don't feel like it. They are not your heeling dogs.

It's important to try to see them as your equal, while still maintaining your leader-of-the-pack status. It's also equally important to learn proper ways to correct them. Husky's do not respond well to angry orders. They are looking for a partner who will ask them to do a task with respect. If you think I'm exaggerating that, just ask anyone who has ever owned a Husky.

7. They Have a High Prey Drive

About a year before I got my Husky, I rescued two barn cats to help keep down the immense population of moles that were tearing up my yard. Those cats worked their little tails off and could barely stay ahead of the population.

Six months after my Husky moved in, there isn't a mole hill in sight. I have never before seen a hunting method quite like my dogs. But mostly it involves his super hearing leading him to exactly over where the mole is, and then he scruffs up a spot in the dirt over it, to break ground, I assume, and then HAMMERS his head right into the soil and pulls up a mole.

The cats sure seem happy.

8. They Are Highly Intelligent

I consider myself an intelligent person. I've owned several breeds of dogs that I considered highly intelligent animals. I currently have a GSD who has diagnosed two medical issues for me, one of which his attention to literally saved my life. My GSD seems to understand thousands of English words and there's times when I will say something about 'the dogs' only to see him react to it.

But the Husky, oh, the Husky. There's been times when I've locked eyes with him and felt real fear that at some point, this dog is definitely going to outsmart me. Two days after I trained my Husky to 'give me his paw', he approached me in the living room and stuck out his paw. I gave him my hand, and he playfully attacked it. Basically, he taught me to give him my paw. I guess because he was bored and wanted attention, but you see my point...

But don't forget that partnership when you're trying to train your Husky. They won't. And if you act too bossy, they won't even pretend to care about your paw tricks. 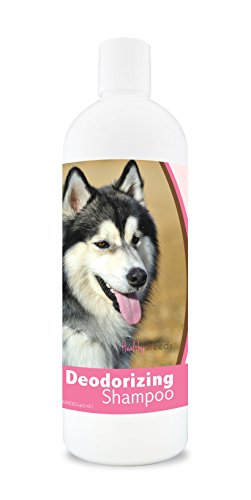 Healthy Breeds Dog Deodorizing Shampoo For Siberian Husky - Over 200 Breeds - For Itchy Sensitive Dry Flaking Scaling Skin & Coat - Hypoallergenic Formula & Ph Balanced - 16 Oz
Look, I'll just be honest. Your Husky is going to get into messes. They are going to dig. They are going to roll in wet leaf piles. They are going out in the snow and coming back covered in mud, somehow. And you're going to be sad that they are dirty, especially if they are badly behaved in the bathtub. But a good Husky shampoo will restore your pupper back to the flashy model they came as. No yellowing feet or underbelly will last through this shampoo. While Husky's do not need to be bathed a lot, there are definitely exceptions such as skunk attacks, rolling in dead things, and general muck. Also, during the dry months they may get a bit itchy and the moisturizer in a good shampoo can cut down on that. Husky's coats should never be shaved but they do blow their coats (shed intensely) every year when spring arrives. Many Husky owners will choose to have it professionally blown, but if you do not, just be prepared for a couple of months worth of brushing in the spring months.
Buy Now

9. They Are Curious Observers

Husky's will watch you do everything. And you'll swear they are actually storing the lesson away for later when you are at work and they'll be the one who needs to trim the hedges. I've never seen such a curious breed.

Many people say that Husky's are very cat-like and I've seen the proof of this many times since I got my boy. He will watch anything anyone does with the kind of intensity that one only gets when they are focused hard on learning.

When you bring up a Husky, you'll often here people who haven't even owned Husky's talk about the Husky down the road. The Husky at the dog park. The Husky their friend owned when they were growing up. And stories abound about the most loyal and hardworking Huskies in history for a good reason. These gorgeous, hilarious, hard-working, and harder-playing dogs are, each and every one of them, one-of-a-kind.