Shemmn is a cat lover who has a great passion towards them. Furthermore he loves to write and research on this unique pets.

"Did you know cats can see in the dark six times better than humans and also cat's smell receptor are 14 times stronger than those of humans?"

Cats have been domesticated for over 4000 years since they were known to exist, over 15% of United kingdoms household possess a cat. But there are some hidden facts about them that are not known. From the unusual functioning of their eye pupil to the way they walk.
With a lot of cats around us, surely people would think they know a lot about them, but I bet you, there are many interesting facts about them.

Did you know that the oldest cat lived for 38 years and 3 days before it died? Crème Puff owned by Jake Perry was born on August 3, 1967 and died on August 5, 2005. This wasn’t the first time for Jake Perry to rare the oldest cat ever lived, previously she had raised the Grandpa Rex Allen cat that had previously hold the Guinness world record by dying at 34 years and 2 months before Crème Puff had broken it. Crème Puff’s diet consisted mainly of broccoli, turkey bacon, coffee with ice-cream and dry cat supplement, food that her owner said to be key for her longevity.

2. Ancient Egyptians shaved their eyebrows when a cat died.

In regard to Ancient History, Encyclopedia wrote by Herodotus in 440 BC, Egyptians would shave their eyebrows to morn the death of the cat. Cats were believed as special creatures in ancient Egypt and killing them was punishable by all means. The wealthy dressed them in jewels and later mummified them. The owners of the cat would then shave off their eyebrows in honor of the cat. Then they would morn and stop after their eyebrows grew.

3. Cat's walking style resembles that of a giraffe and a camel.

Do you know that cats, giraffes, and camels have the same walking style? Cats walk and run by moving the right front leg and the left hind leg first then the left front leg and the right hind leg follow, unlike other that which do the vice versa. Camels and giraffes are the other animals that have the same walking style. If you don't believe me then watch the video below.

According to the veterinary hub, cats sleep for up to 70% of their lifetime. Cat's sleeping habits vary according to various factors; kittens will often sleep for a longer time, and this will decrease as it ages. Their sleeping time will increase when it is chilly or rainy weather.

The average weight of a cat is always between 4-5 kilograms. The world’s largest cat, Meow, weighed 18kilograms(39.7Ib) before its death.

In Talkeetna, Alaska after voters opposed human candidates against contesting for the mayor seat, a cat, Stubbs, was elected after a write-in campaign. Each day, Stubbs attracted 30-40 tourists who traveled to only see Talkeetna's Mayor.

According to Claudio Ottoni of the national geographic, the earliest cat originated from southwest Asia in China in the 4400BC. It then spread to Europe and other continents of the world later. They spread due to following rodents and in search of food. This is how they came to encounter human settlement.

8. A cat can see in the dark six times better than humans.

Unlike humans, cats have a better vision at night. Their pupil can expand depending on the amount of light reaching its retina. Unlike humans, its retina expands during the night. This is so as to allow in enough light so as to see further. During the day its retina shrinks due to light being in excess.

9. Cats sweat via their paws.

Did you know that cats sweat through their paws? Too much fur in their bodies can't allow them to cool easily by sweating due to their heat preservation mechanism. Hence the convenient way for them to sweat is through their sweat glands and pores located in their paws. This is why their paw prints are seen on a floor on hot weather.

According to Jackson Galaxy, cats always walk and run on their tiptoes. This is so as to help them maintain silence and enable them to easily pound on their prey. The walking style also acts as a shock absorber when they are jumping from high grounds.

Perhaps you only know 3 different sounds made by the cat: meow, purr, and hiss. Not only those sounds a cat can make, but also the cat can communicate through a hundred different sounds, unlike dogs which only make 10 sounds.

Cats often in YouTube clips are seen jumping much higher grounds than expected. Their hind masculine muscle helps them to jump far above. This is why cats are able to jump on top of trees, fridges, and on rooftops.

Although cats' noses may seem similar to another cat, the fact is that they aren't. Their noses have distinctive prints that are unique to each other. The prints resemble the human's fingerprint.

It may seem a good idea to give your kitten or cat milk, but it isn't. According to Sarah Ochoa, a Texas-based veterinary, cats' bodies do not respond well to milk. This may cause health problems such as stomach upsets due to cows milk not being part of a cat's nutrition.

15. Cats' scent receptors are 14 times stronger than those of humans.

Cats not only depend on their bright eyesight for hunting but also their nice sense of smell plays a vital role.
However they have such strong sense, that's no match compared to that of a dog. Thus dogs are used by the Investigatory police department.

Did you know this facts about cats? 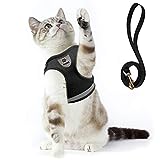