It was a beautiful morning for traveling, and I felt at home driving through the hilly southeastern countryside. There was little traffic on the road, which was a blessing; I had barely started my six-hour drive. As farmhouses and fields sped by, I looked to my left as the lonesome pickup truck ahead of me drove around a large mass and continued on. While I knew that the occasional small animal or deer found dead on the roads of such rural areas was certainly not unheard of, a dog was something different. In that second, I glimpsed a beautiful golden retriever lying prone in the left turn lane with the flash of a red collar still attached. It was upsetting; I had never seen a dead dog in such circumstances, and he or she had obviously belonged to someone. Yet, the truck didn’t stop – and neither did I.

As the miles passed, my conscience plagued me; how could I not stop? While I felt no hope that the dog was still alive, the owners should be called. The body should be buried. But stopping would be dangerous, I reasoned; it would necessitate standing in the lane, and where would I park? If it had been a person, I argued back, there would be no question.

Why should a dog, a part of someone’s family, be any different? I thought of my veterinarian, who I had shadowed for months as a teenager in preparation for a veterinarian career that never materialized. We had once passed a car wreck on the highway, and she had jumped out to help the injured driver and call 911. She would have done the same for that dog, I was sure - it was the right thing. I turned around.

It took a while to find the dog again, as several miles had passed and my memory as to where the dog lay was fuzzy and faulty. There was no turn lane after all, but I pulled easily into the gravel driveway of a nearby farmhouse and got out. The dog was not a golden retriever either, but a white and brown mix of unknown origin. The blood on the concrete and face told the classic story. Despite the unseeing eyes and stiff body, however, I felt sure that the accident had happened not long before and was unfortunately probably a hit and run. I couldn’t find the brass name-plate at first and had removed the collar as a last resort before it was revealed.

How would you handle this situation?

If you saw a dead dog in the road, what would you do?

Calling Donald’s owners was a cell phone reception challenge, but I managed it in the end. I had to leave a voicemail, which would seem a relief compared to speaking with the owners in person, but I wish they had answered. I was reluctant to leave the body, not knowing for sure that the owners were coming, but I had done all I could. Car after car had driven around the dog, and I did not think I was strong enough to move the body off the road. In retrospect, it would have likely been better to call highway patrol than to stop myself. They would have called the owners and moved the body from the road under safer conditions. Still, it somehow seems cold and less personal to have done that. So while it was indeed dangerous to stop – I was kneeling in the lane of oncoming traffic – I remain somewhat glad that I did. 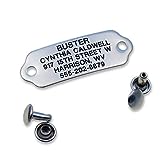 Ways to Protect Your Dog

The drive recompensed, but the serenity had gone. Still, I thought about the lessons to be learned. Some might call for better driving, and although I can see that driving 60 miles per hour on a road that dipped and climbed could easily cause such an accident, we drivers can indeed try to be more vigilant for signs of life while driving on similar roads.

Others might frown at dog owners for letting their animals wonder free. While life in the country is not like the city, perhaps Invisible Fences for Dogs that surround personal property and still scare off intruders could be implemented more.

As for me, the smallest thing I ask of dog owners is to do what Donald’s family did; make sure you have contact information on the collar in case your dog is found lost, injured, or in worst case, dead. The microchip placed by veterinarians has been a wonderful innovation, for collars can be left behind, but it is not helpful in such situations as I found Donald.

Through careful driving, invisible fences, and collars that include contact information, it is my hope that perhaps Donald’s death can save the lives of more dogs.