A Hillbilly Guide to Snakes: The Southern Copperhead

The southern copperhead is a venomous member of the pit viper family found in the United States.They are experts at camouflage and nearly impossible to spot in a pile of leaves. In the southern United States they are often feared more than respected, and every kid has been told by their parents to avoid them.

Although many snakes are confused for the copperhead they are quite unique in their camouflage pattern. The southern copperhead will have an underlying color which is usually a light brown or pink. They will have a pattern that will be a reddish brown to dark brown. The head of course will have a copper color which renders the name copperhead.

The southern copperhead is a venomous pit viper with a head that will have a triangular shape due to the large venom glands that has in the side of its head. These venom glands will cause it is cheeks to look puffy which is what causes the triangular shape. They will also have slit eyes like a cat. Because they are a member of the pit viper family they will have two extra holes in their nostrils which are called pits. The pits are used as heat sensing organs.

The southern copperhead isn't a huge snake but they can get quite large. Typical adults range between 25 and 35 inches.

What Kind of Snake am I?

What kind of snake is pitcured above? Answers will be at the bottom of the article.

Snakes Commonly mistaken for a Copperhead

There are no shortage of snakes commonly mistaken for copperheads. I couldn't tell you how many times someone has told me that they've killed a copperhead only to find what they actually killed with such malice was not but a harmless nonvenomous snake. Many nonvenomous snakes share a similar color or pattern. Probably the thing that makes the copperhead the most unique, and the thing by which to identify them is their face. If you compare a viper's face to that of a nonvenomous they look nothing alike.

The southern copperhead ranges from the South Eastern United States in Florida all the way up north to Maryland or Delaware and as far west as Missouri, Oklahoma, and Texas.

The southern copperhead feeds primarily on rodents, however they have also been known to eat small mammals, birds, and amphibians, other reptiles, and even insects. They especially like cicadas. The copperhead subdues and kills it's prey by using venom.

What kind of snake am I?

Question 1 What kind of snake is pitcured above? Answers will be at the bottom of the article. 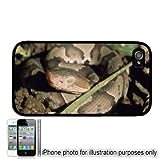 The southern copperhead is venomous, and that makes it very dangerous. There are very few fatalities amongst humans that have been bitten by copperheads, however that does not mean that they are safe to handle for people who are not professionals. A bite from a copperhead causes severe pain and can cause extensive tissue damage amongst other problems. Many nonvenomous snakes are killed by humans who mistake them for copperheads. Many copperheads are killed as they have a reputation for being aggressive to humans. However, like most venomous snakes if the copperhead is left alone it will most likely not bother humans. Most humans are bit while attempting to kill or handle snakes that are venomous. To avoid a bite from a copperhead simply leave it alone and do not attempt to kill or handle it.

1. Copperhead... Noticed the pattern and coloring along with the shape of it's head. If you look closely enough you can see the slitted eyes that also marks it as venomous.

2. Cornsnake... Notice the shape of the head and the round eyes.