Why are Children Often Targets of Dog Aggression?

As a trainer and dog behavior consultant, the topic of aggressive dog behavior towards children saddens me as often mishaps and accidents could have been prevented many times. Often, there is no quick fix, and in some cases, the dog is better off re-homed in a household with no children. The risks at stake are too high, and because the dogs often live in a state of constant vigilance and stress, it's the most fair choice for the dog --and of course, the safest for the child. Unfortunately, in severe cases, dogs with a bite history towards children may have to be euthanized.

The Centers for Disease Control remind us that children are common targets of dog aggression. It is estimated that each year, 800,000 Americans receive medical attention for dog bites; and half of them are children. In particular children between the ages of 5 and 9 are the most typical target, with the rates decreasing as the children age. About two thirds of bites affecting children four years and under are directed to to the head or neck region. Statistics show that the bite Injury rates are higher in boys than girls.

But why are children often a target for dog aggression? Why are statistics so high? There are several reasons. For starters, they height of a child puts them in a vulnerable position. This often puts the child at the dog's eye level which can be perceived as a threat by some dogs. Several dogs dislike having people near their faces. This could be an explanation as to why the attacks in younger children are directed towards the head or neck region, and why when a dog bites a child more damage is done.

On top of that, children often behave in ways that may trigger predatory drive. A small child squealing and running spastic may mimic the behavior of wounded prey animals. Dogs may get aroused by this and may chase the child and bite. Herding breeds such as border collies, may try to herd boisterous children to regain order and this often entails chasing and nipping.

Children may also engage in behaviors that some dogs consider to be socially unacceptable in the canine world. Their bite threshold may be crossed when a child may hug the dog--unless the dog was prepared for this behavior through training and socialization-- when a child pulls the dog's tail, grabs his fur and ears. Some dogs may bite when a child gets close to a perceived resource-a bone, toy or bed. Many bite when they are cornered or hiding from a child and don't have a way out. With their flight option taken away, they may feel the need to fight.

Nature versus nurture, alias genes versus life experiences must be kept as well into consideration. Tolerance towards a child's behavior may be genetic; some breeds may be better choices for households with children; yet even within a breed there may be genetic variances, with some specimens more tolerant than others. However, socialization plays a big role as well. Dogs who have been socialized towards children during the critical period of dog socialization may fair better in a household with children compared to a dog who has had little exposure. Under socialized dogs are not familiar with how children behave and they may perceive their voices and erratic movements as threatening, when they are not.

Regardless of how well behaved a dog is around children, no dog, should ever be left alone with a child. If this simple rule was followed countless lives could have been spared. How many stories are there of parents stepping away for a second and coming back to the most horrible scene of their lives? How many children wandered off to open a gate where grandpa kept his dog? How many times do we hear, "we would have never imagined our dog would do this to out child?" Too many times! 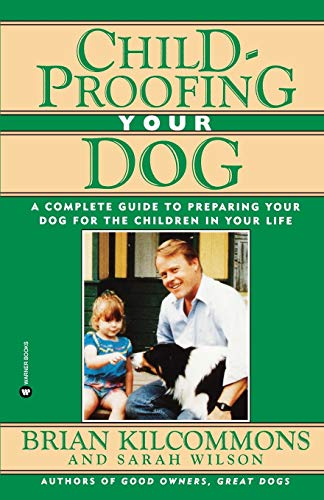 Childproofing Your Dog: A Complete Guide to Preparing Your Dog for the Children in Your Life
Buy Now

Bite Prevention for Children and Parents

The worst bite cases are those from dogs who haven't learned to inhibit their bite. Yet, even in dogs who have developed finesse in gauging the force of their bite, there are always chances that emotions such as fear, stress or too much arousal may cause them one day to not be able to gauge the pressure and may break skin. The risks are always there. All dogs can bite when their bite threshold is crossed. Some dogs will bite without doing damage, some may do a whole lot. Following are tips for bite prevention for children. If your dog has ever bitten a child so hard he has broken skin, immediately keep the dog separated from the child and consult with a dog behavior professional.

What Potential Parents Can Do

What Parents Can Do

Interestingly, according to a survey conducted by the Cincinnati Children's Hospital, 43% of children between 5 and 15 years old failed a simple dog-bite prevention test. More on this can be read in the article "Study reveals Children Likely to Fail Bite test" The results of this survey are disturbing and mean that children need much more guidance and this can be given only by the parents by looking for education handouts and seeking out the help of trainers who organize dog bite prevention events just for children.

Is your child savvy on dog body language and etiquette? Let him/her take a test. Follow the following link and load the test at the bottom of the page "Doggone Crazy bite prevention quiz". Then post your results in the poll. For more on stress signals in dogs read signs a dog is about to bite, dog displacement signals and dog calming signals.

Disclaimer: if you are concerned your dog may bite or has a bite history, play it safe and seek out immediate professional help

How did your child do on the test?