Cattle are sometimes born with heads that diverge, so they have two heads from the forehead to the end of the muzzle. This condition typically causes death before or shortly after birth.

Andy D-Day and Dolly are two rare examples of two-headed cattle that survived into adulthood, and to the relatively advanced ages of 12 and 13 years old respectively. They both appeared in fee-charging shows and were the subject of multiple souvenir postcards (shown below).

Andy stands apart in the annals of sideshow animals. Dubbed "Andy D-Day", this bull was born on June 6, 1944 and died in 1956. Andy was born in Arkansas but soon bought and transported to Ohio.

Given that most two-headed calves do not live very long, Andy did very well to make it to the ripe old age of 12. He was probably helped by having two heads that barely diverged and so were not significantly heavier than a single large head. And it seems that his nasal passages, outside eyes and other vital organs were in perfect working order.

Wilbur Rasor purchased Andy in 1946. Andy was advertised along Route 40 to draw in passing tourists looking for an unusual sight. Andy was displayed for many years (with a 25 cent entry fee). Visitors could feed the freak bull, and there was a profitable trade in Andy postcards, some of which are shown here. The rarer postcards now sell for upwards of $20.

Owner Wilbur Rasor also toured Andy with a number of sideshows. Rasor seems to have developed an interest in freak animals in 1941, after his cow 'Spotty' delivered a two-headed calf that died at birth. The preserved calf specimen was displayed alongside Andy. 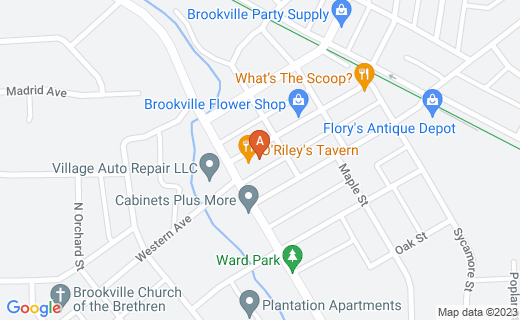 Where is he now?

Andy's head was preserved and is on display in The Spitler House in Brookville Ohio. This is a community museum run by the Brookville Historical Society. The house is a nice example of Queen Anne architecture built in 1894. (The first house in Brookville to have an indoor bathroom).

For many years the head was removed from display or left tucked away in the basement. Most visitors probably did not even know it was there,

Despite the rather poor job of taxidermy, Andy has recently become a roadside attraction again, for people interested in the weird and quirky parts of America's past.

One of the few other examples of adult two-headed cattle is Dolly the cow. Born in 1936 in National City, California she lived to the age of 13. To add to the spectacle her right hand head was sometimes described as male and called Rolly. In reality both sides are more likely to be from the same fertilized egg and both female, having separated only partially towards being twins.

Dolly was also displayed at many state fairs by her owner John Elvin Thompson. Dolly died after slipping on ice, suffering a broken leg and then developing pneumonia. An attempt was made to preserve the body through taxidermy but it was not properly prepared and rotted away. None of her remains survive to the present day.