Weird Bats, and the Truth About Rabies

The bat has long been associated with the vampire and sucking blood. We have named a member of the bat clan as the Vampire Bat because it draws its nutrients from the blood of others. In actuality, the bat is a shy acrobatic creature that is social and kind of cute when you look close enough.

Some members of the bat clan are stranger than others, these weird animals can fly with the precision of a surgeon and pin-point accuracy. When we consider their sight is quite limited, and that they use their hearing to navigate they just possibly become an even greater mystery than that of the generic blood sucking vermin we usually consider.

Here you will find a few types of bats that may be less known, yet more interesting than those we normally hear about. Enjoy your venture, not to worry, no turtleneck clothing is required.

Bat Wing Comparison to Other Beings

The bat wing is much like combining an ancient Pterodactyl and common 21st century bird. It would seem to be both hunter and raptor in design, with an uncanny similarity to that of human hand-arm anatomy,...creepy.

Bat Key Holder for the Bat Lover in Your Life! 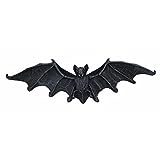 Bumblebee Bat is also known as the Hognosed Bat

This happens to be the smallest bat in the world, only about as big as a good-sized bumblebee—as well as being the smallest mammal in the world. This little guy doesn't have a tail, but as its name suggests, a snout like a pig. You will only find this bat near the city of Sai Yoke in western Thailand. The place it calls home was once a lush forest of green canopy and busy bug life. Today the region has been stripped completely for farming.

You may on occasion see groups of ten to fifteen of this tiny hognosed bats resting high up on the limestone walls of caves. Unlike most varieties of bats, these rest well apart from one another, (most bat species rest clumped together sprawling grandly across cave walls). They get busy at dusk and can be seen circling above bamboo clumps hunting for tiny insects to chase down and consume.

Like monkeys, apes and possums in most of the world's tropical rainforest's, the fruit bat has evolved to take harder larger fruit. The remote Solomon Islands in eastern Melanesia has very few land mammals other than a few rats, so this provides many ecological niches for the bats of this location. Monkey-faced bats have large, sturdy and pointed teeth. Their chewing muscles are so powerful that they have over time developed large bony crests on their skulls. This evolution of structure allows these grinders to munch on food as hard young coconuts, no small task. They resemble primitive primates—think lemur or South American monkey—thus their common name.

These monkey-faced bats are so unknown that is wasn't until after 2004 that the largest species, weighing up to 2¼ pounds (or about a kilogram), were given a scientific name. Such delayed discovery of this large and striking creature would speak loudly as to just how much scientist have to discover about the diversity of life here on Earth.

It wasn't until 1977 that these prehistoric Bulmer's bats were discovered to still exist. It was assumed that they had gone the way of the Woolly mammoth because we only had evidence of the species from 10,000-year-old bones. An anthropologist was in Papua New Guinea at a feast where he was curious as to what was being served up. He managed to get a hold of a skull from the cooking-pit and sent it the University if Papua New Guinea to be identified. It was determined to be a Bulmer's fruit bat.

Scientist promptly made way to the cave where these bats were known to dwell, with no luck, as no bats were in attendance. In 1992 a mammalogist named Lester Seri found a remnant group of these bats in Luplupwintem (the name the same cave was known by). After many nights he was successful in capturing one of the bats in a safe net. Confirming a still yet greatly minuscule number of them to exist.

Human hunting of this peaceful, beautiful creature has significantly reduced its numbers. They are strictly fruit-and-nectar eaters, making them certainly a vital contributor to the pollination of trees and seed distribution in the rainforest. The majestic 3¼ feet-wide wingspan (or about a meter) is a history lesson on the creatures that roamed the earth in New Guinea, surely reminding us of the ice age. The population of the species has been on the incline since their re-discovery in 1994.

In Indonesia you will find an island known as Sulawesi. This island holds the dubious title of being the place you will find the largest variety of fruit bats in the world. Pallas' tubed-nosed fruit bat is one of the most unusual and hard to spot. It has a built in camouflage so that when it is at rest, its brown-and-yellow spotted wings envelope its body in such a way that the creature looks like a dead leaf...brilliant! If bothered it will peek over the wings with these reddish-brown eyes and decide to take flight or not depending on the danger. Mother bats carry the young while in flight, providing the youth are not too large yet.

The strange tubular nostril give it a morbid, ghostly look, however it remains a very gentle bat that will not bite. It is assumed by researchers that the nostrils have evolved as such to make breathing easier while the creature has its face smashed inside large, soft fruit.

Have you ever been face to face with a bat?

DO NOT Get Rabies! It is a very serious illness and once you begin to show symptoms, it's too late, your number is punched, fatal, horrible, painful death follows. Again, DO NOT get Rabies!

Rabies is viral, it directly attacks the humans (or any host) nervous system. It hops the red-eye along your nerve cells from the site of the bite directly to the brain stem. It then sets up shop incubating to the point where a sudden blast takes place, inflaming the nerve cells of the brain. Being an equal opportunity virus, it at the same time, inflames the spinal cord, bringing many horrible symptoms and suffering until you are welcoming death with open arms. Not pleasant, not pretty, not advised!

You are more likely to die following a rabid bat bite than from a raccoon, skunk or a dog. This is because we take huge precautions in America to vaccinate against the virus in our pets. Besides, it is unlikely that you don't realise you have been bitten by a raccoon versus a bat. Despite what you have heard or how vicious bats look in vampire movies, they have surprisingly small teeth. Thus, it is more likely to go unnoticed should you get a nip from little bat. (If a bat got within 10 feet of me while I am awake, I am gonna know to get the heck outta there). However, bats have been known to quietly come down from their perch in an attic and bite a person while they sleep. This type of bite is more likely to go unnoticed, resulting in the devastating outcome mentioned before. I must stipulate that this is very, very rare, but has occurred.

The most prevalent cause of human infection by rabies from bats is when we try to handle the infected animals. They look small and fragile and it would seem they are no match for our human strength... yea, tell that to your doctor while she is wiping away the foaming discharge around your mouth in few days. If you see a bat, do NOT bother it. Call the local authorities (animal specific authorities) and stay clear of the critter. He's small, and you may be able to end his life in the here and now, but he packs a huge punch in the long run; one you don't want you or your family to get hit with.

Comments for "Weird Bats, and the Truth About Rabies"