Deep inside the jungle of Africa is a small country the World Bank considers to have a GDP of $28,111 which is better than that of Israel. This country is known as Equatorial Guinea. Equatorial Guinea is the third smallest country in continental Africa. It has a population of 500,000 people. The GDP of this small country is driven by forestry, farming and fishing. The discovery of large oil reserves and exploitation of the oil have put Equatorial Guinea among the best countries in the world in terms of GDP.

Equatorial Guinea is in Congo rainforest which provides one of the finest tropical climate, fertile soils, rich expanses of water and deepwater ports which are potential natural resources for exploitation by Equatorial Guinea in the future. Congo rainforest, like Amazon rain forest is a home to many creatures that are interesting to man. The first people to inhabit Equatorial Guinea were the pygmies – pygmies are people whose adult males grow less than 4 feet 11 inches in average height.

Goliath Frogs Survives Only In Equatorial Guinea and Cameroon

The goliath flog has the capability to grow up to 40 cm in length from snout to vent, and may weigh as much as 3.5 kilogrammes. The weight of 3.5 kilogrammes for the goliath flog is equivalent to that of a rabbit. Due to proximity of Equatorial Guinea to the ocean, equator and Congo rainforest, the weather conditions here are extremely humid with relatively high temperatures. The Goliath frog has been tried to be reared in other places of the world but unfortunately the frog is not willing to survive anywhere else other than Equatorial Guinea and neighboring Cameroon.

Learn More About Goliath Frog From This Video

For as long as the people of Equatorial Guinea and Cameroon can remember, the Goliath frog has been a delicacy for very important festivities. If you catch one goliath frog, you can prepare enough meal for a party, or better still, you can pay a part dowry payment to your in-laws. The Goliath frog has white meat which is a good source of quality proteins. 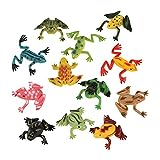 The numbers of Goliath frog has of late been dwindling perhaps just because of climate change or perhaps because of uncontrolled illegal trading. It is no longer easy to catch one and if you must import one from Equatorial Guinea to New York, then you must be prepared to pay in the region of $3000 per one goliath frog. Goliath frog is today classified as endangered species, and no matter how many dollars you have, you can only import a maximum of 300 goliath frogs per year. But this being such a lucrative trade, there must be a black market for Goliath frogs somewhere in West Africa.