It is very rare to discover the existence of a new mammal, therefore when a new species of Capuchin monkeys, the Blonde Chapuchin, was identified in Brazil in 2006, that was big news! It is also critically endangered. It is believed that only 180 exist!

The cute little monkeys that are typically depicted as being the companions to organ grinders is the personable little Capuchin. The Capuchin monkey is named for a group of friars called the Order of Friars Minor Capuchin, a spin-off of the Franciscan priests. Capuchins usually resemble their namesake – the friars. Their body is a dark colored black or brown, with a much lighter colored face, throat and chest. And on their heads they generally sport a black little cap.

Living in the Tree Tops

The Capuchins typical habitat is high up in the tree tops. They spend the majority of the daylight hours searching for food, stopping to take a siesta in the early afternoon. At night, they will sleep in the safety of the treetops wedged between two branches.

Capuchins live in tribes or missions containing 10-35 members. These groups contain females with their offspring and several males.

The Capuchin must be constantly vigilant because it has many enemies which include mountain lions, jaguars, coyotes, snakes, crocodiles and birds of prey to name a few who would like to have them for their next meal.

The female Capuchin will begin to bear young every other year at about the age of four. Males are not sexually mature until somewhere around the age of six years old. When first born, the baby clings to its mother’s chest, but as it matures it moves to riding on her back.

Be sure and watch this little guy in this quick video. It's amazing to hear the sounds that they are able to make. Warning: If you are using ear buds, the whistles are very high pitched. 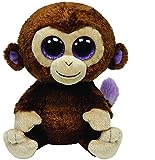 No Monkey Business When It Comes to Intelligence

Capuchins are very intelligent and have the ability to learn new behaviors just by observing them only once. They show their intelligence in other ways also, appearing to have the ability to think things through and to problem solve. During the mosquito season, Capuchins will capture and crush millipedes which they then rub on their backs. This provides the Capuchin will a natural insect protection. When presented with their own reflection in a mirror their behavior does not indicate that they believe that they are seeing another monkey, but appear to understand that they are looking at their own reflection

In addition to being kept as pets, the Capuchin is also being trained and used as service animals to assist quadriplegics, like dogs are trained to assist the blind. In order to accomplish this training, they are first socialized in a human home as infants, and then undergo a very extensive training program. Some of the things that they are trained to do include microwaving food, washing the quadriplegic's face, and opening drink bottles.

What other types of Capuchins exist?