The herding instinct which is so ingrained in collies, is ultimately just a modified version of the wolves' killing instinct. Through centuries of selective breeding, the killing instinct was toned down enough so that herding dogs would not follow through the complete predatory sequence of orienting, eyeing, stalking, chasing, grab-biting, kill-biting, and dissecting. This means that collies were selectively bred for circling and gathering without actually going in to make the kill. A collie killing sheep would have been devastating! According to Border Rescue Rescue, it's more correct to say though that the herding instinct was bred "into them" rather than "out of them".

About the Border Collie Personality

As with other collies, borders were working dogs. To be more precise, these black and white dogs were first class herding dogs utilized in the hilly countryside across the border between Scotland and England. These hilly areas required a tad bit different herding style. Indeed, unlike other herding breeds who were asked to drive flocks of sheep away from the shepherd, borders instead were had to circle them and gather them back to the handler. Great stamina, drive and high energy were qualities that made these dogs up for the task. These dogs were far from being couch-potatoes; indeed, most likely the only time they got to rest was after a long day of work, possibly enjoying the evening with their masters in front of a crackling fire.

Because these dogs were commanded by their shepherds from a distance, they have an uncanny ability to read the owner's body language. Their ability to follow directions, whether in the form of a whistle or a hand gesture, along with this breed's natural instinct to herd, made them valuable assets in the past where shepherds depended on these dogs, because back in time, the Industrial Revolution created a great need for lamb, mutton, and wool. Nowadays, these dogs make great companions as long as their owners are capable of channeling this breed's energy and deal with their strong-willed personalities.

A border collie working with sheep

Border collies are often sought because they are considered very smart and they have a reputation for making good family dogs. Living with border collies though seems to lead to two popular outcomes: those who cannot live their lives without these fanatical black and white dogs, and those who are desperately seeking help because they are exasperated by their border's behaviors. Of course, there are also those in the middle who still aren't sure what to think about the whole situation! So what are these border collie behavior quirks and how can they impact the lives of those considering this breed? The following are a few border collie behavior quirks. * Note: the term quirks here is used to just describe behaviors that may appear odd to those who haven't owned this breed. Border collie owners and breeders know for a fact that many of these "quirks" are really just natural, normal behaviors.

A look into the day of a working border collie can make couch potatoes cringe. Many of these workers can still be admired today in the many farms and ranches around the world. Their endless sprinting and stop-and-go action helps them gather and control herds of stubborn sheep a task known as "fetching or gathering." When the border collie is not in action, he's most likely using his eyes to stare the sheep as he crouches as low as he can and then creeps up to them as needed. If the intimidating stare doesn't work, he'll upgrade to barking, nipping and occasionally gripping when dealing with particularly stubborn sheep.

But what happens to border collies today when they are not sent to work? Failure to provide sufficient outlets for pent-up energy and failure to meet this breed's mental stimulation needs, may lead to destructive, and even obsessive behaviors. Many exasperated owners often underestimate the exercise needs of this breed.

When a border collie is awake he gathers sheep, but what does a border collie do when he's about to fall asleep? Most likely he counts sheep as he gathers them! As much as this sounds like a joke, it's not that far from reality. This breed is so into gathering sheep, that in absence of sheep, he dreams of gathering children, joggers, birds, bikes, cars-- you name it. This can become quite problematic over time, especially when chasing is also accompanied by nipping, which as mentioned this breed resorts to in some cases. Channeling his herding instincts may prove helpful, but herding remains an ingrained instinct that can be reduced, modified or redirected, but can never be removed completely.

The border collie breed has the potential to be a good family dog, especially in the case of specimens with a lower than average herding instinct, that are fortunate for being placed with families aware of this breed's instincts and prepared for dealing with them. The truth is, to a border collie a child running in play, is often the equivalent of a stubborn sheep. The Border Collie Rescue claims that to a border's eyes, a child is "a sheep in kids' clothing." His instincts will soon prevail and he'll do what it takes to gather the rambunctious child and attain more control of the situation. Problems start though when the child starts screaming and running more and more, which can lead to the border's means of last resort :gripping.

A Master in Anticipation

After years of being selectively bred to follow the shepherd's instructions, this breed can be shaking in anticipation when it comes to obeying commands. His great intelligence and eagerness to follow orders may seem like a great thing, but it can backfire. The problem is, that he tends to want to analyze and often anticipate every move you make, and his analytic precision may at times pose some challenges to novice trainers. You will need meticulous precision and loads of patience with these fellows. At the same you cannot show too much frustration and can't get irritated. Scolding this often sensitive breed, may cause it to shut down and give up trying.

A Streak of Shyness

It's vital to purchase a border collie puppy from a reputable breeder, who knows the breed well and has started to accustom the pup to seeing people and hearing common noises. Then, it's up to the owner to continue socializing this breed with as many people and other dogs and animals as possible. A good amount of time should be also spent in getting the puppy used to noises as these dogs can be quite noise sensitive. Shy borders may bark and be suspicious of everyone.

If you plan on getting a border collie, make sure you have a good fence. This means, tall, sturdy and with wire sunk underground to prevent a border from digging his way out of China. And prospective dog owners shouldn't rely on locks too much, this astute breed has been known for even picking at those!

Many border collie owners report that their borders are somewhat obsessive to some degree. Normally, they would be obsessed about sheep or other animals they could gather, but in absence of that, they'll easily get obsessed about the Frisbee or the sport of fly-ball. Usually,though this is a "healthy obsession" and not a behavior problem. Problems start instead when borders start engaging in certain behaviors and cannot be disengaged from them. Turning in circles, chasing the tail, chasing shadows, staring at walls are a few examples. Often these behaviors are the result of a lack of mental stimulation. The bored, under-stimulated dog "invents" a behavior that is repeated over and over. The compulsive behavior soon becomes a reward and the dog engages in it more and more. 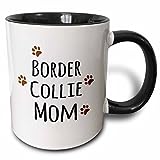 Why are So Many Border Collies Given Up?

Several dog shelters and rescues have many border collies and border collie mixes that are surrendered, why is that? The Border Collie Rescue has three explanations: 1) the border collie is given up because he lacks enough instinct and drive to herd sheep as desired. Of course, this means that some fortunate dog owner may end up with a more manageable specimen with toned down "herding instincts." 2) Sadly, a larger percentage of border collies are given up because they have bitten, and more often than not, a child is the victim. 3) The top reason border collies are given up though is because of their high energy levels. Because most dog owners today don't own a farm with sheep, many find it difficult to find the time and commitment needed to drain the needs for energy and mental stimulation of these dogs.

As seen, border collies can be a handful for those not prepared to deal with these fellows. However, there are many success stories and several people who are "stuck" and would never want to own any other breed. Overwhelmed by this breed's exercise needs, but still want one? You can contact a rescue and ask for an older specimen. Older borders may considerably mellow down. Fostering a border for a shelter may be an option that will allow you to get an idea of what to expect. The bottom line is that choosing a dog should never be a light-hearted decision. As the Border Collie Rescue puts it, goes a long way, they claim: "Many people spend far more time choosing their next car then picking the right breed and dog for them." For sure, there would be considerably less dogs in shelters if some more time and effort was spent in making informed decisions.

Alexadry©, all rights reserved, do not copy.