My Cat has Diabetes

If you are feeling anxious because you think your cat has diabetes or it has just been diagnosed, you are not alone. It came as a shock to discover that my cat has diabetes. I knew that humans and dogs could be diabetic, but hadn’t come across it in cats. I had just inherited Minnie and Tilly as their owner had died following a long illness. I knew something was wrong as soon as they arrived because there was much more urine in the litter tray then I would expect from two cats. But I had no idea what would be causing this. Separating them briefly I quickly discovered that it was Minnie who was flooding the litter tray and took her down to the vets.

If you have a cat who has free access outside, rarely uses a litter tray and mostly drinks water from streams and puddles, it will be harder to spot that they have diabetes. With an indoor cat it is much easier. You will notice that there is much more urine in the litter tray and you have to fill the water bowl more often.

You may also notice that your cat wants to eat more and always seems hungry and some cats develop weakness in their hind legs making them look like they’re very slightly crouching.

What causes diabetes mellitus is the pancreas not producing enough insulin or the cat’s body cells responding poorly to insulin. As a result the body cells can’t absorb enough glucose and there will be high glucose in the cat’s blood and excreted in the urine.

Just as with humans, diabetes may occur in cats who are overweight and have become insulin resistant, but it can happen to cats and humans who are slim too.

According to diabetes statistics from ‘Pet Diabetes.co.uk’ around 1 in 500 cats are diabetic in the UK whereas a study by ‘Diabetes UK’ at the end of 2011 suggest that as many as 1 in every 20 of the British Population are diabetic. So comparatively speaking it is quite rare in cats.

Insulin Stored in a Fridge

How to Treat Cat Diabetes

The main treatment is twice daily injections with insulin. As the owner you will need to learn to do this. But don’t panic, it is straight forward and I will show you what to do. In the UK you are likely to be given caninsulin by your vet which despite the name is perfectly suitable for cats. Your vet will suggest a starting dose based on your cat’s weight and blood test results. You will need to monitor your cat’s response to the insulin and to start with the vet will suggest your cat has blood tests done each month whilst its condition stabilises and you find the best insulin level.

The injections should be given twice daily 12 hours apart about 15 minutes after it starts to eat food. You may need to change your cat’s feeding habits. Allowing your cat to eat little and often throughout the day this will make it difficult to manage the condition. You will need to be firm and feed twice daily at 12 hour intervals. Do not feed your diabetic cat treats in between meals.

Suggested Schedule For a Diabetic Cat

How to Inject a Cat with Insulin

Most types of insulin are best stored in the fridge.

1) Insulin must be gently mixed but not shaken each time you use it. This can be done by gently rolling the bottle between your palms or slowly turning the bottle upside down ten times.

2) Take the caps off the syringe.

3) Turn the insulin bottle upside down and push the syringe needle through the rubber seal of the bottle and into the insulin.

4) Draw down the required amount of insulin and pull the syringe out.

1) You need to inject your cat underneath its skin. To start with you may find it helpful to have someone else holding the cat. Gently pinch and raise some skin on your cat’s neck or above the shoulder.

2) Push the needle half way in at roughly a 45 degree angle.

3) Depress the plunger to inject the insulin.

5) Place the caps back on the syringe and put it in your ‘sharps’ box. Take the used needles to the vet each month to be disposed of safely.

I was surprised with Minnie how amenable she was to being injected. She would just stand or lie still whilst I did it.

Do not inject your cat with insulin if it doesn’t eat any of its meal or if it is sick immediately afterwards. Insulin in the bloodstream with no food to work on can cause the cat to have a diabetic crash.

Injecting a Cat with Insulin 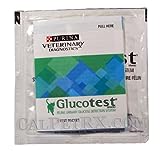 Your vet will suggest how often you should bring your cat in to have blood tests. Depending upon how stable the cat’s condition is this could be every three weeks to every six months.

You can get dipstick kits to monitor your cat’s urine for blood sugar levels at home. This does mean keeping your cat separate from your other cats each time you want to collect a sample. You will also need inert plastic washable litter balls which won’t soak up the urine or affect the results of the dip test. Alternatively there are products you can add to the litter tray which change colour in the presence of glucose in the urine.

You can also get kits to collect a pinprick of blood and dipstick papers to monitor your cat’s blood sugar levels. The advantage of both of these methods is that you are able to adjust the insulin on a day to day basis and become quickly aware of any changes in your cat’s sugar levels.

Lifespan of a Diabetic Cat

Diabetes does make a cat more prone to other illnesses such as urine infections and if your cat’s blood sugar levels drop dangerously low they can fall into a coma an die with as little as 4 hours between first appearing unwell. Low blood sugar can occur if the cat is sick shortly after you inject them with insulin and therefore have little food to produce glucose for the insulin to act on. These factors can reduce your cat’s lifespan.

Having said that, it is possible for a diabetic cat to have a normal lifespan and die of a cause unrelated to diabetes. Minnie died at 14 from a tumour in her bowel, three years after she was diagnosed with diabetes.

Adapting your Lifestyle for a Diabetic Cat

If you are a home bird, being reliably at home at fairly precise 12 hour intervals won’t cause too much difficulty. But for some people it can be complicated fitting in the injections around work shifts and busy lives outside the home. In this case you may need to call upon a trustworthy pet sitter or perhaps a relative or neighbour, who can give the injections in your absence.

Stress can affect a cat’s responsiveness to insulin, so it will help to keep your cat’s lifestyle constant. Bringing in a new pet such as a cat or dog could upset the insulin balance, so it may be easier not to attempt introductions to the household. Holidaying in a cattery can also be a stressful experience for a cat. They may be more comfortable staying at home and having a pet sitter come in whilst you go away on holiday.

The other important thing is don't give your cat treats in between meals.