hglick has been rescuing and placing stray cats for over 20 years and has personally fostered more than 10 rescues .

Cats eating disorders are usually the result of the absence of outlets for excess energy. These outlets include hunting, bringing home prey, eating grass, and engaging in play fighting. When they are not available a cat may seek relief in activities that are not high on his owner's approval list.

Compulsory self-grooming is an energy displacement activity that frequently affects cats that are hospitalized, boarded at a cattery, or deprived of their freedom and subjected to long periods of boredom. The tell-tale signs are excessive licking, especially at the groin. Hair is lost producing bald spots and skin irritation is mild.

Another energy release phenomenon that doesn't fall under the "cats eating disorders" category is the urge to eat grass. When not available they turn to houseplants, some of which may be poisonous. You, as the owner, should be very careful in providing a safe environment for your curious companion to play. Eating grass might produce a gastric upset, but is not a dangerous activity. You can attempt to satisfy his needs by growing grass in a flower pot to substitute for the plants. As a last resort give up the plants.

Many cats bring home prey to fulfill a primitive instinctual urge, or to exhibit their prowess. They do not always relate killing with the need to eat and are apt to deposit a variety of dead or near-dead things at your backdoor. If you attach a bell to your cat's collar it might provide a warning to the innocent creature he is about to pounce upon, but it doesn't always work. Some cats are agile and develop their hunting skills in an extremely stealthy manner without ringing the bell.

Cats food preferences are usually developed in the first six months, but there are several eating disorder behavior patterns that can be very worrisome.

Anorexia Nervosa is a condition (similar to the human eating disorder) in which the cat refuses to eat., loses weight, and begins to starve himself. Deep-seated insecurity or nervous stress is usually at the root of this problem. Always remember that loss of appetite is a primary sign of many feline illnesses, and a family veterinarian should be consulted. Initially, you can attempt to entice your cat with treats. If the problem persists, tranquilizers will reduce tension and are frequently indicated in the treatment of this disorder.

Obesity can be a major problem. It is common for owners to contribute to this problem by offering cats gourmet foods and tasty treats after meals. Some cases are due to lack of exercise. Others to boredom or feeding cats together, which encourages competition. Avoid a sudden drastic reduction in calories. This can produce hunger stress and lead to aggressive behavior. Obesity can be prevented by good feeding practices and by adequate exercise.

Cats eating disorders can also be exhibited in abnormal sucking behavior. Many animal behaviorists suggest that a kitten's habit of sucking on fabrics, people's clothes, and even himself, can be traced to an unsatisfied nursing drive produced by insufficient nursing while in the nest. This habit can often be stopped early by catching the kitten in the act and rapping him on the nose with your finger or applying some foul-tasting material to the fabric, like hot sauce or tobacco juice. Allow the kitten to smell it, then put it in his mouth. You can also aim a spray can at the cat so he can smell it and retreat at the sound of the hiss. Always remember to aim away from the eyes. 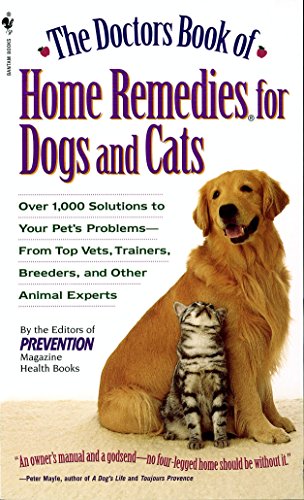 The Doctors Book of Home Remedies for Dogs and Cats: Over 1,000 Solutions to Your Pet's Problems - From Top Vets, Trainers, Breeders, and Other Animal Experts
Buy Now