How Does Clicker Dog Training Work?

Clicker Dog Training - Does it Work?

I have always been a huge skeptic when it comes to clicker training but have recently come to the humbling conclusion that I perhaps been wrong! Imagine that!

Having begun training our malamute puppy who is currently 8-1/2 months old and weighing in at just under 75 pounds, I have decided to rethink my training methods and am actually finding that the clicker is the best solution I could have possibly stumbled upon.

I can’t even take credit for figuring it out on my own – it was in fact our trainer at puppy class who introduced me (again) to the magic of the clicker and I might add not a moment too soon!

HOW DOES CLICKER TRAINING WORK?

Malamutes are by far one of the most difficult breeds to train in some respects simply because of their highly refined intelligence. They are of the mind that they rule the roost so to speak and they can be extremely stubborn. Their stubborn streak is quite often mistaken, however, for rebellion or dogs that are ‘out of control’. I have found quite the opposite in working with them – they actually welcome control but the catch here is that you, the owner, have to be the one in control – the alpha. Now how to GET to be the alpha and keep your ‘title’ is all about the training.

Whereas labs for example want nothing but to please their owners, a malamute will inevitably seek to go around said owner any and every way possible until he or she has proof as it were that there is a good reason to obey. They are just harder to train. It became evident even after a few weeks of puppy training that Griffin was tiring of the same old/same old commands and you could almost read his mind when issuing commands. We were working primarily with lured behaviors – which means that we were enticing him with food to go into a sit or a down. He would invariably do it but then if asked to repeat the performance, you would see anything from shaking hands to singing to flat out looks of stupidity – as in ‘huh – you talkin’ to me?’

Enter the clicker – since we started using this about 3 or so weeks ago, I have seen a marked improvement in his receptiveness to training and for some reason, it takes the food out of the picture – but not really! The clicker is the ticket though in my humble opinion because instead of hurrying to reward the dog with a treat (which is sometimes impossible instantaneously), you have the leisure if you would of clicking (approving) the behavior at the very instant that it occurred (and you do not have to do it unless the criteria are met) – and THEN comes the reward. So there is an element of a wee bit of delayed gratification involved. I think at least in the malamute’s case – that little bit of time for ‘reflection’ is really paying off.

The clicker supposedly has been around for 70+ years or so – at least the concept. However, it was reportedly introduced by a marine biologist and a dog trainer (Karen Pryor and Gary Wilkes and some colleagues) back in the 1980s in the United States. The clicker concept is that it a conditional reinforcer – meaning if you do not perform, you do not get treats. Trainers of all sizes and types use the clicker. There is clicker training for horses and cats as well – and it is the recommended training method for service dogs. There must be something to this training if it can function across so many boards and serve so many so well!

The concept of clicker training is basically this – if you do X, you will get a pay-off and sometimes, you will get a BIG pay-off! However, if you do not do X, you look like an idiot and you get nothing! It actually puts the dog in the position of thinking ‘what does she or he want?’ This is good! This is great! The dog is now focused entirely on getting the pay-off and he or she will usually keep on trying just to make sure that they get it. There is no ambiguity about it – either they do what they need to do or no click – hence no pay-off.

THE PHASES OF CLICKER TRAINING AND BEHAVIORS

OFFERED – This is where you are waiting for the dog to offer to perform – what they will do to see if they can get a pay-off (treat). Some dogs (malamutes in particular), once they know the ‘game’ as it were, begin offering all kinds of things – it becomes almost comical as in ‘is THIS the one you wanted?’ and they will usually go through their entire repertoire of what they know until they realize that it is only 1 thing you are after –this time!

LURED – This is where you hold a treat in your hand and you ‘show’ a dog by slowly lowering it to the ground for instance (holding it practically on their nose) that you want them to go into a down position. This is effective, especially when starting out, but later on, as training progresses, it is possible to completely eliminate or at least minimize the lure to get what you want. You may have to resort to it for a short bit of time – for instance placing it on an elevated table you want them to get up on – but for the most part, once you have clicked a behavior a few times, it is remembered and there will not be a need for the lure. Treat yes – lure no.

TARGETING – This is the most advanced stage of clicker training – when you teach a dog with a clicker to push a button or grab onto something specifically and repeatedly without fail, to touch something or do something ‘outside the ordinary’ repeatedly and without fail. This is how service dogs are trained. When the command is given for instance for a service dog to go into the kitchen and flip a switch on the coffeemaker, that is how they are trained. That specific button pushing or switch flipping is a TARGETED behavior that has been enhanced over and over by the trainer and then finally done without fail every time - because it was rewarded consistently over time.

SHAPING – This is a behavior that refers to the gradual progression of clicker training that leads up to the ultimate performance of whatever task or trick you want the dog to perform.

You are in fact shaping the dog’s concept of what you want! If for instance you want a dog to get up on a stool (to simulate having an exam at the vet’s and needing to put feet up on something or moving to be examined or groomed) – you cannot expect the dog to just jump up on the stool and know what to do. You first place the stool or table on the floor and stand ready with the clicker and treats (more on that below).

The dog will probably look at you since you have the clicker – you observe the dog and if the dog comes anywhere NEAR the stool – puts a nose to it, bumps it accidentally – you click/give a treat. Now you have their attention even more – ‘ah – there is something she likes about the stool – she wants me to do something – but what?’ In a matter of minutes, Griffin was putting his nose on the stool – click – put a treat on the stool for him to gobble up. After 5-6 of those behaviors, I quit clicking it though because we can go on like this forever and he will not progress.

Now he began to think outside that particular box – ‘man – she wants something else – what is it?’ He bumps the stool with a paw – I click that/treat! He is thinking now – ‘hmmm – okay – it was a paw – what about the paw?’ So he puts 1 paw cautiously on top of the stool and CLICK – BIG wad of treats! ‘Whoa – something about the paw…. Wow – I got mega treats’. Next, he puts his paw completely on top of the stool and click/treat – only rains down a little wad of treats and praise. At this point, he is totally focused on the stool and thinking about what his paw has to do with the treats. You get the idea?

So we move on with this shaping behavior and eventually I got him (all in the same session) from not even knowing what the stool was about to having BOTH paws on the stool, which he was a little worried about doing in the beginning but with the encouragement of clicking and treats, he totally understood that performance equaled treats. The next day, I was able to add ‘move’ and do some body language (stepping almost to him sideways) and when he moved his back feet even a millimeter, click/treat! Pretty soon he figured out that I wanted his 2 front feet to stay steady on the stool while he moved around the stool with only his back feet. I coined the phrase for him with this part of the training as ‘move’.

Going backwards, using the same principles, if you were teaching the dog to sit – you would start with a treat held above the dog’s nose and tipping backwards so that in order to keep the treat in sight, they HAVE to sit. As soon as the butt hits the floor – say ‘sit’ - click/treat. Lure the behavior for a few times and then quit clicking/treating. Give the command orally and keep clicking/treating every time the behavior is accomplished. Finally, you can progress to just a hand signal for the sit and click and treat. 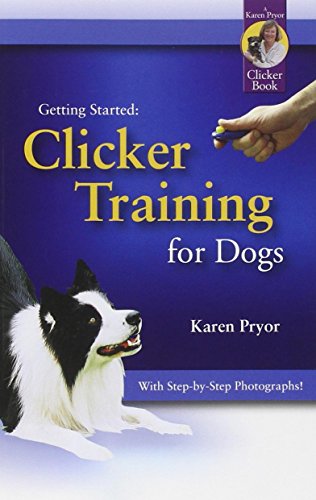 GETTING THE DOG READY FOR CLICKER TRAINING

The nice thing about this particular method of training is that there is no getting the dog ready! As long as you have treats and as long as you have a clicker – you’re ready to start. You should accustom the dog to the fact, however, right away that you will be getting a treat if you hear a click. You do not have to make the dog perform to start out. Simply clicking the clicker 1 time and giving a treat 5 or so times in a row should get their attention really quick! They are very astute in figuring out that they hear a noise (the click – once) and they got a treat – what’s up with that? They do not seem to resent that they might have to work harder for it down the road by the way! It is all about the treat!

In summary, there are a million different commands that can be incorporated into clicker training and dog tricks as well like bowing or singing/barking, rolling over, etc! The most important thing is to remember the points as listed above and be consistent with 1 click gets a treat. If you need to reevaluate a portion of the command that you are working on it, do that – go back to the lure behavior and just work it a part at a time – or upgrade the treats. I like this technique mostly because it is totally non stressed and is reliable simply because it is based on a positive reward system. The only time the dog gets a treat is when he or she does what you want! I think it is a win/win situation.