Cochins: The Round, Fluffy Chickens

Cochins are a wonderful chicken breed.

They have endearing personalities, cute appearances, and hardy dispositions, and are really great chickens to have in your flock.

Whether standards or bantams, Cochins seem just like balls of feathers asking for a cuddle.

Standard Cochins are fairly large, they stand about knee high and are so fluffy that they look even bigger than they are. They're definitely a giant chicken breed.

Bantam-or miniature Cochins are about the size of a basketball. In fact, with that shape, they do look rather like basketballs.

Cochins have very roundish, ball-like bodies. Bantams' legs aren't very long, and so they especially look as though they're balls with feet.

Cochins have big, fluffy behinds filled with soft feathers. They're sort of like little blobs on the back of the chicken or the bustles women used to wear on their dresses.

They're one of the cutest aspects of the breed, but it can make it a bit difficult for the Cochins to breed. All those fluffy feathers make it difficult for anything to meet. That's why most Cochin breeders either remove some of the feathers from that area or simply do artificial insemination.

On some chickens the big blob of feathers takes some extra cleaning too since they cover the bottom so much.

Cochin with a Bustle Butt

Cochins, like a few other breeds of chickens, have feathers growing down their legs and covering their feet. This adds to their overall fluffy appearance and makes it almost look like they don't have legs at all.

Sometimes their feathers grow over their feet so much it spreads out and makes them waddle rather adorably.

Cochins come in an incredible number of colors and patterns. Some of the more common ones are listed below. Cochins are often used to add more color to other chicken breeds.

Frizzles are a popular off-breed of Cochins. Though there can be Frizzles made of any breed, the most common Frizzle variety is made from the Bantam Cochin.

Frizzles are unique with a fun look, since their feathers curl up and outwards instead of in and smooth like normal chicken feathers. To get a Frizzle, the breeder needs to breed a Frizzle with a smooth-feathered chicken, this leads about half the babies having Frizzled feathers and about half with smooth, but prevents the problems that arise from breeding a Frizzle to a Frizzle.

Think Cochins are interesting and want to see more weird and unusual chicken breeds? Check out the Extraordinary Chicken line. They're a series of two books, showcasing the beauties of the chicken world, as well as calendars doing the same. These books are so beautiful that I think they make wonderful coffee table books, but they're great anywhere.

Chickens are extraordinary, and this book captures their incredible sizes and shapes and colors. It started the extraordinary chickens series.

What's in a Name

Cochin is also the name of a city on the west coast of India. It is a major port. The chicken breed is not named after the area. Instead, both names are mix ups of traditional Chinese words.

Primarily in other countries, Cochin Chickens are sometimes called Pekins, though that can get confusing because there are other breeds of chickens and ducks that are also called Pekins.

Cochins do just fine in the coop with the rest of the flock in the chicken coop. Since their personalities aren't too passive, nor too aggressive, they usually fit right in without any fighting.

No matter where they live, standard Cochins need perches that are lower to the ground than normal perches. Since they are so heavy, Cochins can do damage to their feet jumping up and down otherwise. Padding the area with wood shavings or other bedding where they will be jumping is also a good idea, to sort of soften the blow when they land.

Except for show chickens, Cochins can be fed the same feed you give the rest of your flock.

Show birds should get a show bird feed that will boost their feather colors and keep them in condition. As with most birds, white Cochins shouldn't be fed a lot of corn or marigold petals in their feed, as this will cause yellowing of the feathers.

Cochin Mama with Some Adopted Chicks

Cochins are usually very good at sitting on eggs, they're often kept just to hatch out other eggs. Their general fluffiness, plus their motherly personalities, make Cochins wonderful broody hens.

The Bantam Cochin hen below doesn't want to let go of the eggs she's setting on, even though they're not even real eggs.

Learn How To Keep Chickens 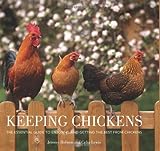 Chickens are lots of fun to raise and far more interesting than most people assume. Learn more about our feathered friends and how you can have chickens.

During certain times of the year, Cochins, like all chickens, lose most or all of their feathers, several at a time, then replace them with new and fresh feathers.

They normally molt in the fall, but it varies depending on how much sunlight there is every day and a few other factors. They will also shed and replace many feathers when the chickens grow out of the little chick phase and into the teenage chick age.

There Are Several Ways to Get Cochins

Cochins, while not a common breed, are easy to get from numerous places. Most of the major hatcheries sell bantam and standard versions, Cochins are a familiar sight at chicken shows, and there are numerous breeders. Or you can contact your local feed store and find out when and if they are going to get a supply of Cochin chicks in the store. Most feed stores will have them in at least once per season and may be willing to order them special for you if you prepay for them.

One of the most common ways to get chickens is to order them through a hatchery.

Hatcheries are businesses set up solely to hatch chicks and sell them to individuals, almost always through the mail. They can safely do this because baby chicks spend about three days absorbing the nutrition from their egg yolks and so don't have to eat. This means the hatcheries have to sell newborn chicks, and to keep them warm enough in their travel, they have to sell the chicks in groups of 25 or more. So if the weather isn't too hot or to cold and you want 25 baby chicks or know some people who will go in on a chick order with you, you might want to consider getting your new Cochins from a hatchery.

My Pet Chicken - This is one of the few hatcheries that sell chicks in smaller amounts, they charge a lot more for them, but you can order as few as 3 chicks to be mailed to you since they have heat packets included to help keep them warm.

Cochins are a popular chicken breed, so of course there are many breeders that raise Cochins for themselves and other people. Here are just a few, though you should first check on your local Craigslist or at your local feed store to see if there is anybody nearby raising Cochins so you don't have to worry about shipping eggs, chicks, or adult birds. Also, it's nice to have the same type of birds as someone nearby so you can share information and get a new friend.

Other Sources for Cochin Chickens

These aren't anywhere near the limits of where you can get Cochins. There are numerous other breeders I didn't list or you may have a livestock auction near you.

Want to know more about Cochins? Check out a few of these sites:

Cochins are not the only unusual chicken breed out there that you may not have heard of. Check out this book and see some of the variety these seemingly boring creatures come in. Even if you're not really interested in getting chickens, looking at all the weird and beautiful breeds is great fun.