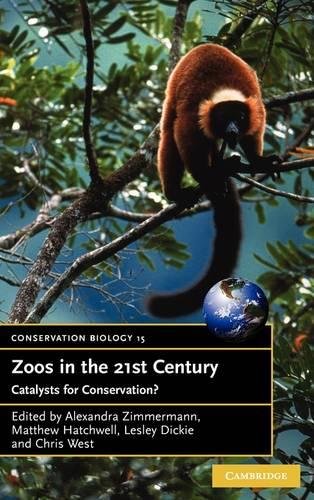 There are many zoos today which claim to be playing a part in conservation of species. The word 'conservation' is seemingly most often used by those zoos which insist on breeding the likes of White Tigers or White Lions which have absolutely no role in conservation whatsoever.

Within the zoo world, conservation is about the long term management of species. It is all about population genetics and maintenance of viable captive populations with the aim or re-introduction at some point in the future. Not today, not next week or next year but looking one hundred years ahead.

No zoo can do it alone. Viable populations needs numbers and numbers needs management. Inter zoo cooperation then is absolutely essential. Zoos must agree to bide by the directions of the studbook holder and species coordinator.

In a 'Conservation Zoo' the keeping of animals is as much about Not breeding as it is about breeding. Not breeding is important. There are only a limited number of spaces for any given species in captivity. it is essential to manage these spaces and ensure they are utilised by those animals needed within the breeding programme. This may mean keeping pairs or groups of only genetically important males or females. Contraception will also be used or separation at times of 'heat'.

Not all zoos want to keep X or Y species. Available spaces, budgets and staff all play a part. Moving into the keeping of a new species means agreeing to the guidance offered by the species coordinator and to actually work with them as an active participant within the breeding programme.

Zoos like to breed animals. Baby animals make cute photos and draw in the visitors. Visitors mean money and money means so many things. Breeding too can mean money and zoos are often tempted. Hence we have situations as with 'Knut' the Polar Bear.

Hand rearing is so often a mistake. It is very difficult to integrate hand reared animals back with their own kind. Even if it is successful they may never breed because they do not know what to do. Artificial insemination? Yes it can be done but more often the progeny have to be hand reared too and so a vicious pointless circle is created. Utilisation of spaces in captivity by 'non contributing' animals means that valuable animals will not be permitted to breed.

Just this sort of situation exists with the White Tigers and Lions. These 'freaks of nature' are taking up so much space in captivity that could be used for genuine conservation.

Humboldt Penguins are very rare in the wild. The numbers have decreased over the past twenty years.

Happily Humboldt Penguins are relatively easy to breed. They lay two eggs but usually one chick will die. Many zoos will remove one egg and hand rear a chick. In a good colony the numbers will rapidly increase. There are stubooks for Humboldt Penguins. It is a managed population. There is though an unmanaged population. This is held within that huge number of zoos that exist outside. The zoos that are purely profit motivated. To my mind the Bad zoos. They may claim Conservation....but how can they be? If these zoos were in the remotest bit interested or involved in conservation then they would be members of the breeding programme.

In the past the Humboldt Penguin Coordinator had advised that breeding should cease in genetically overrepresented colonies. Sensible action giving consideration for the well being of the species as a whole, the complete studbook managed captive population. Easily done too. A small pin hole in each egg laid. The opportunity to breed and rear for real will come later.

But no. Some zoos want chicks. Well they look good, draw the people in. At the end of the day there is a ready market for chicks in the Bad zoos outside of the official breeding programme. Zoos who do such a thing are not Conservation Zoos. They are anti- conservation!

Managed chicks disappear into an unnmanaged population. If it stopped there it would not be so bad but such animals have a habit of appearing again either by way of purchase and exchange after several moves outside. These are genetically 'dirty'. From parents which were already over represented. Creeping in the back door they can cause great damage to a breeding programme.

I have only used Humboldt Penguins as an example. There are many others. It will take many years before The European Otter population is sorted out because of mistakes in the past. It demonstrates the importance of not breeding.

Within the UK a Zoo Licence requires that the zoo is an active participant of breeding programmes for any of the population managed species which it holds. It is sometimes overlooked but that means it must go through the Species Coordinator before breeding, obtaining or disposing. It is one of the most frustrating part of a Coordinators work that this is ignored. The next most frustrating part is having participants ignoring a 'no breeding' request and then being asked to find homes for the (over represented genetically) progeny.

It does mean though that if a zoo is holding a managed species and not participating then, in theory, its zoo licence could be revoked. Without the licence the collection would not be allowed to have paying visitors. It would inevitably close. Non Conservation Zoos should close.

I could go on. Look for signs in the zoos you visit. If they claim the animals to be threatened, rare or endangered check whether they are the member of a breeding programme. It is not enough that they are breeding the species because perhaps they should not be.