Chinese Crested Dogs, the Ugliest Dog in the World of Unique Dog Breeds

The "Chinese Crested" dog breed is one of those you will always find listed at the top of the "worlds ugliest dog" contest list. Of the "unique dog breeds" found among these beautifully gruesome creatures, the Chinese Crested ranks among the top three. It's a good thing these little personality packed dogs are so good natured and loyal, because if things were based strictly on looks, this breed would be packing more gold metals for "ugly" than Shaun Smith has for snowboarding! Both the Chinese Crested and Shaun, with their floppy locks, are as good natured, as good natured can be.

This article seeks to teach you about this AKC registered breed by "defining its temperament," "history," "features," "health concerns" and advice when looking to "buy a Chinese Crested" as your new family member. Lets get started!

How many "Dog Trivia Questions" can you get correct?

My brother and sister-in-law have the grand pleasure of being the proud owners of Rocco, who is a Chinese Crested dog. Ted and Jen are having the time of their lives since adding Rocco to the mix of their teen and pre-teen family construct. With the Chinese Crested, who is a fine-boned, elegant, and graceful dog, one would think the chance for his survival among four active, healthy youth would be questionable. But this high-spirited animated agile breed truly can hold his own. The Chinese Crested are known to be very adept at jumping and climbing and can grip their toys (or a loving family members neck) tightly with his front paws as if he had hugging super powers.

Also known as the "Velcro" dog, this breed prefers the company of humans. He depends on the emotional support of his family through stroking and rubbing, and never misses a chance for personal attention. Chinese Cresteds will take it very personally if left behind for any length of time. Ted and Jen have another dog and cats, so Rocco has plenty to keep him busy when the family is away at work and school. But when it comes time for travel or socializing, you can bet Rocco is right in the mix of things hopping up onto the car seat before the family hits the road!

The Chinese Crested is generally reserved with strangers, some lines or individual dogs are high-strung and/or timid when it comes to situations or meeting people they are unfamiliar with. Early and frequent socialization can help to prevent this from becoming a problem.

The Chinese Crested is playful with (although sometimes jealous of) other pets. Even though the breed is usually independent, seemingly willful at times, Chinese Crested are very bright dogs that take well to obedience training. It is highly recommended that this breed of dog be trained, otherwise his independent willfulness can become inquisitive activities (and not in a good way).

When training your Chinese Crested dog, the best methods to employ are going to be reward-based methods. With these creative little escape artists, maintaining obedience and boundaries will prove to be priceless, but use caution, demanding anything of this artistic creature can result in unwanted antics. They have been known to climb or dig under fences. Some dogs can get a bit "yappy," barking or howling out of spite, which also can be remedied through reward training (a Chinese Crested has his pride to think about).

What You Think Really Does Matter!

Do You Prefer a Smooth Coat or Long Coat Dog?

What About "Chinese Crested History?" Are they a "Dog from China?"

Oddly enough, the Chinese Crested history is not as close to China as you may think. They are thought to have been discovered by Chinese traders either in Mexico or Africa. These Chinese mariners took the odd breed on board ships as ratters and they are assumed to have bred with other African hairless dogs while on board.

Due to the fact that rats were the primary carrier of the disease, these quick K9 hunters were vital during the time of the Chinese plague, killing vermin in rapid order. When the middle of the nineteenth-century came around, you could find these plumed-topped dogs in many works by European artist, while the American dog show circuit saw a sporadic infiltration of the Chinese Crested in the late 1800's. This beautifully ugly dog comes in two coat varieties: hairless and powderpuff, with the distinction between the two being obvious.

The hairless mutation has what is referred to as a lethal gene , which means every hairless dog carries both genes for powderpuff as well as hairless offspring. The varieties both show up in any one litter, and sometimes breeders will inbreed the two. On the American Kennel Club's (AKC's) 2010 list of dog popularity, the Chinese Crested shows up in 57Th place. A proud rise in rank from their 69Th place back in 2000. (The entire 2010 AKC popularity list consists of 167 competing breeds.)

Portrait of dogs compliments of petanim.com

Do we really Have to Discuss the "Chinese Crested Physical Features"

As lacking in physical parameters as the Chinese Crested may seem, there is a rigid configuration that they must live and breed by according to AKC standards. The dog should stand 11" to 15" at the shoulders and weigh in between 8 and 15 pounds. He is supposed to be hairless except for the floppy tufts of hair on his head (the crest), the tail (plume), and the feet (socks). Some do have a rather disturbing and sparsely arranged coating of body hair, which gets shaved off if heading into the show ring (thank goodness).

Chinese Crested sweat through sebaceous glands found in their skin and feet, so sponging him daily and bathing him weekly keeps his glands clean and open, which allows the skin to breathe. Their colors (actually it's their skin pigment) are of a broad variety and include, white, black, brown, blue, golden, and even pink or lilac. You can even find exotic spotted patterns regularly. The ears and tail are just about the only things that are always neutral when it comes to the Chinese Crested breed.

The "Chinese Crested" may look odd, but they are pretty smart!

Chinese Crested dogs are generally pretty healthy living 13 to 15 (human) years, with a few things to keep an eye on. These little guys can experience difficulties with what is called luxating patella (see diagram) and both parents should be screened for this and yearly for CERF(Canine Eye Registry Foundation, which is ran by Purdue University, Indiana) certificates.

The Chinese Crested dog breed in general is very sensitive to anesthetics, vaccines, and chemicals. This breed should NEVER be casually medicated or sedated. Most of these dogs are prone to acne and happen to be very allergic to wool and lanolin (lotion) products.

You won't find a Chinese Crested hanging out to enjoy the rain or snow, he is more likely found sunning on a warm sandy beach, where otherwise he might require a sweater for such inclement weather. He does have to be careful when seaside though, he (like human childred) is quite easily sunburned, especially those with lighter skin pigment. This sun sensitivity does make them more susceptible to skin cancer.

Most of these feathery-headed K9s will have missing teeth, which seem to be pretty soft compared to most dogs. Regular dental attention and care is a much needed chore when having a Chinese Crested as a family member. 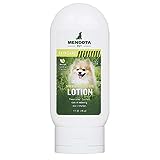 Jennifer, (pictured with Ted above) was kind enough to share some pictures of Rocco with me. I have taken the liberty of modifying her pictures by working them into the displayed pictorials within this article. Thanks Jen!

What to Look for "When Buying a Chinese Crested" Dog

The most important things to keep in mind when deciding to buy a Chinese Crested dog are:

In your quest for information about the Chinese Crested dog, I hope you found this article of some help. These creepy-cuties are most interesting and offer a great deal of personality to make up for their unusually Gothic appearance. They may require a little extra attention and reassurance, but as a family pet, they are surely much too hard to resist.

I say, "Dog Bless the Chinese Crested owner, for this human has seen the beauty that resides within!"