Who Can Resist That Face?

Everyone Loves a Dalmatian

The Dalmatian is easily known by its striking black-spotted pattern design. However, the origin of this interesting color pattern is still unknown. Its name stems from Dalmatia, which is a region located in western Croatia. This dog breed was recognized by the American Kennel Club back in the year 1888 and has remained popular ever since.

Dalmatians are full of energy and have great enthusiasm for running long distances. Training this animal to behave in the home takes great patience and long obedience training hours in a safe area outside, with plenty of room to run around. The Dalmatian tends to be a little aggressive towards other animals, especially strange canines but is known to be gentle with other pets, such as cats and even horses.

Although this dog breed makes an excellent house pet, it is a little stubborn when it comes to training. This animal may also be a little too intense and energetic for small children in the house. However, as with any dog breed, with thorough training and adequate exercise, the Dalmatian can make an excellent family companion.

Dalmatians Used to Accompany Horse-Drawn Fire Engines to the Fires

The Public Press of Northumberland, Pennsylvania had this article on 25 Oct 1889, Friday on Page 1:

"In form and size, the Dalmatian dog closely resembles the English pointer. There is a statement prevalent among writers on canine subjects that; in the country of their original nativity they are trained and used for sporting purposes, and are staunch and useful. However this may be, it is certain in this country and in England, no one ever thinks of them as field-dogs.

They show an instinctive and extraordinary attachment to horses. Where one of them is kept around a stable, he soon makes friends with the horses, and the attachment between them and the dog seems to be mutual. The dog is likely, however, to form a special friendship for one horse or a span, hovering near them in stalls while they are inside, following them through the streets when they are driven, and in one instance known to the writer, the moment the horses stopped, the dog would spring up to the whiffletrees, mount the horses, and curl down quietly on one or the other, until the driver resumed the reins.

The Dalmatian dog is marked in a striking and beautiful manner with black spots on a general color of white. The spots should be from an inch in diameter to mere specks. The late Henry Ward Beecher wittily compared one of these dogs to "an animated blueberry pudding." Whoever has seen the New England article, the white pastry spotted by the dark juice of the fruit will readily recognize the aptness of the comparison. It is this very quaintness and singularity of appearance which gives the dog its special nature as an attendant on a carriage or inmate of a stable."

What My Friends Say about Dalmations

Their Popularity Waned in the 1930s, Then Rebounded

A 1902 article in the Manhattan Mercury asked, "What has become of those old black and white spotted Dalmatian dogs, better known as "coach dogs," that were so numerous and popular throughout the United States from 1800 to 1882?"

The answer was that they'd gone out of style. The article went on to explain that they were first brought to England from the Austrian province of Dalmatia with the first ones appearing in the United States shortly after the Civil War.

The writer felt that the drop in popularity was because the dog "had no particular use other than to pose as a showy animal and to trot along by one's carriage or coach and attract attention by his striking color and markings. Aside from this, the Dalmatian dog was completely worthless. He could neither hunt, serve as a watchdog, catch rats, fight, or do anything else that other dogs are capable of doing."

Of course, since the 1930s, the popularity of the breed has rebounded. Americans no longer need a dog to trot beside their carriage, kill their rats, etc. but they do love dalmatians for their personalities and distinct looks.

Ideas for Naming a Dalmatian

Additional Tips for Training a Dalmatian

Do you own a Dalmatian? I do and If you also do, you know that Dalmatians are adorable and sweet but extremely energetic. They need constant exercise, someone to play along with them. I suggest that you visit this site for more details on How to Train your Dalmatian.

Life-Sized Plush Dalmatian for the Kids 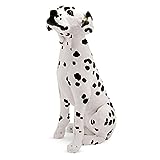 Melissa & Doug Giant Dalmatian - Lifelike Stuffed Animal Dog (over 2 feet tall)
Look at the size of this huggable dalmatian from Melissa and Doug. I count on them for a quality toy. If you aren't able to have an actual dalmatian, then this is the next best thing. You could decorate your child's room in a firehouse theme and have this dog as part of that. I even know of someone who takes their antique fire engine out for local parades. He has this plush dog to set on the seat next to him. Looks like a real dog! My friend has a large plush dog like this in the children's room of the public library where she works. She says the kids really look forward to seeing the dog and run over to hug it when they visit.
Buy Now

Upkeep of this energetic dog breed takes a bit of an active lifestyle on the owner's part. The Dalmatian will not be happy with just a few short walks during the day. He needs to be able to run long distances and roam around outdoors. In fact, Dalmatian's make wonderful jogging partners. Just be sure to keep him in a safe area when off leash.

These dogs need to have the luxury of living indoors but also have the flexibility of being able to run outside when necessary. It does not tolerate hot temperatures very well so if he is kept outside be sure to have plenty of cool shaded areas and soft bedding for him to relax in when necessary. Companionship should be a top priority when owning a Dalmatian, so do not keep him outside longer than necessary without company.

Dalmatian Playing in the Snow

Do You Have a Dalmatian?

A very common health issue with the Dalmatian his deafness. Minor concerns include hypothyroidism, allergies, iris sphincter dysplasia, and seizures. There are occasional cases of CHD, but it is extremely rare.

Dalmatians tend to have long life spans, ranging between 12 and 15 years, and sometimes longer. Veterinarians recommend that you have this dog breed specifically tested for eye problems, hip dysplasia, thyroid, and potential hearing loss issues.

If you own a Dalmatian or you are planning to adopt one, it's good to learn more about their unique biochemistry. Learn why this breed is prone to urinary problems. Visit this website for details on that, Understanding Dalmatian Urinary Problems.