Adrienne is a certified dog trainer, former veterinary assistant, and the author of "Brain Training for Dogs."

Is Your Dog Testing its Wings?

In the previous article, we took a look into a dog's fear periods taking place when the puppy is between 8 to 10 weeks and then 6 to 14 months. This article is about another important developmental stage known as "the flight instinct period." As the name implies, a puppy during this stage will put on its wings and start "flying". Of course, not in the real sense of the word!

What Happens During a Puppy's Flight Instinct Period?

What happens during this period, which generally takes place between the ages of 4 to 8 months, is the puppy becomes more independent and confident. At this stage you may see more curiosity to investigate things but also a certain level of stubbornness.

During this stage, the puppy is about to enter adolescence and there are hormonal changes taking place. Owners report dogs becoming more disobedient and "testing" and it is not a coincidence that this is a time when dog obedience trainers see many clients pleading for help.

In nature, this period takes place when young canines are old enough ( 4 months old) to leave the den and start learning how to hunt and start exploring their surroundings.

A Time of Exploration

From a domestic setting, during this stage the puppy begins to explore places out of the home. This is when dogs start becoming reluctant to come when called. If your puppy was always sticking by your side, now the honeymoon phase is over; he may likely ignore you now.

Because this is a developmental stage, it may still take place regardless of how much training you did before, therefore, better be prepared for it. Failure to address this stage properly, may lead to a dog that believes a recall is optional.

Some dog owners report seeing the first "zoomies" during this stage. In other words, the puppy starts zooming through the home running at full pace in circles, over tables, under tables, across the lawn as if possessed. This is actually fun to watch and an integral part of puppy hood. The tecnical term for zoomies is Frenetic Random Activity Periods (often abbreviated as FRAP).

A Taste of Freedom with Safety in mind 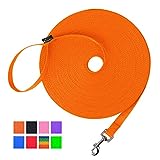 As a dog trainer, I use long lines quite extensively. They come helpful with dogs who have a poor recall or need to learn it better, while giving them a taste of freedom. Not all dogs have the luxury of exploring their surroundings safely courtesy of a fence. Long lines come in different lengths and they can be found also in horse tack stores.

Catch Me if You Can!

How to Deal With the Flight Instinct Period

So Rover is no longer listening to you and is acting as if he has never hear your commands before? Thankfully this phase will pass, but it does not hurt to polish the training you have done so far.

What to Do During this Stage: