Best Products for Your Dog

Let's face it. Most of us think of our dogs as part of the family these days. We try to do the very best by our canine companions and as a culture, we spend thousands if not millions of dollars on our pets.

When it comes to dog water bowls, this is an area where you can find just about anything and everything under the sun to make sure your dog has adequate access to water.

Similarly, though a lot of people aren't aware of dog booties, this is another item that can really enhance your dog's comfort. Surprisingly, dog booties are good for hot and cold weather.

When you think about dog water bowls, it seems like a no-brainer at first thought. However, really it isn't. Water can be more important to your dog's health and overall survival than his or her food. A dehydrated dog can be a dead dog. It doesn't take long for a dog to dehydrate to the point of no return either. This can result in kidney failure very quickly which can result in your precious pooch's untimely demise.

I like to take extra precautions when it comes to my malamutes and access to water. I make sure that they have many different places that they can drink water if they need it. Especially depending upon the time of year, since we live in a high mountain desert climate, they not only want water but it is of great necessity to them.

Another often overlooked component of making sure your dog has water is what temperature is it going to be available at? If you have large dog bowls full of water but they are sitting outside in the direct sun, it's going to be too hot for them to perhaps want to drink it.

By the same token, if you have a water bowl outside in the wintertime in a high mountain desert climate for instance, the water freezes in the bowl.

Other factors that come into play are the ages of your dogs and their particular behaviors. Do they play around with the water bowl and spill it--or maybe even carry it off obviously emptying it!

Almost as important as the dog water bowl itself is your particular dog's behavior with water and how they access it, when they access it. 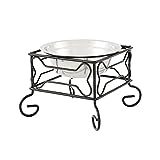 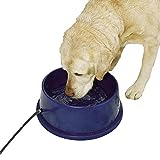 Here are just some of the favorite kinds of dog water bowls on the market:

WARNING: No matter what product you buy, when it comes to dog water bowls, check on the Internet for any recent recalls before purchasing. This author knows of a very recent recall on dog bowls at Petco which had toxic materials in them. Unfortunately, it seems to be widespread in terms of pet products and it pays to be on top of the latest information before purchasing! 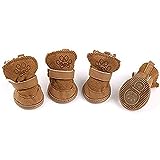 Most people associate dog booties with the Iditarod. While this is certainly a great illustration of one of the uses for dog booties, it's surprisingly not the only instance where they come in handy.

Take for instance the blazing hot summer heat in places like Arizona--or even in high mountain desert climates like Central Oregon. Oftentimes, the pavement is so hot that you could probably literally fry an egg on it.

Even after the heat of the day has dissipated, sometimes asphalt and sidewalks still retain the heat making it very dangerous to walk your dog no matter what the outside temperature says.

Dog booties provide total comfort for a dog's feet while walking (or running) on hot surfaces. They also provide comfort and protection if hiking over jagged terrain such as rocks or rough trails. Especially if running a dog on uneven surfaces, dog booties are a necessary piece of equipment.

Mushers use dog booties to protect their dog's feet from crusted snow and ice that can damage their paws. It's recommended that dogs should be wearing booties if they're doing any kind of running or extensive walking on snow that crunches. Once a dog's paw is injured, it only will get worse because it's much the same as an open wound or a sore. Dog booties protect the dog's paws from the beginning if they are used sooner rather than later but once an injury to a paw has occurred, it's even more important to cover it.

Make sure dog booties fit properly, however. They usually are sold by weight of the dog but some can be sold by breed. There are many places that sell dog booties, most of them also specializing in dog pulling gear or sled products.

The booties should neither be too tight or too loose--both having a bad effect on the dog's feet. Most dogs need to become accustomed to wearing them so some prep work may be needed before heading out to the trail with the dog booties on. They may try to dislodge them by shaking or biting at them so training the dog first to leave them alone is important.

Booties for your dog come in all kinds of fabrics and durability standards so make sure the bootie is designed for what you have in mind to do with you dog.

There are also emolient creams that work wonders on dog paws even inside the booties to keep their pads in good shape. Always inspect the dog's feet after any prolonged exposure to extreme heat or cold temperatures.

For a typical reaction to the first time wear of dog booties, check out the YouTube video below. It's hysterical but all dogs can be trained (eventually) to not be bothered by the booties on their feet!

Booties Can Be Worn By Any Size Dog