Dogs in a Huge Sanctuary in Costa Rica are Being Poisoned; Owners Seek Help

Dog lover and outdoorsman, John Marshall is a veteran reporter who has worked for The Associated Press and other major news outlets.

Owners of 'Land of the Strays' Say Dogs Being Intentionally Poisoned

The owners of a massive dog sanctuary in Costa Rica called Territorio de Zaguates are appealing for help as they face separate battles in their ongoing work that has saved scores of stray dogs that would have otherwise perished.

Officials at the sanctuary, also known as the Land of the Strays, say intruders have been sneaking onto the property and intentionally poisoning dogs. The sanctuary needs donations so security can be beefed up and the dogs kept safe.

The sanctuary is also facing legal battles as opponents, for reasons that aren't clear, try to shut it down.

Officials at the sanctuary say in a Facebook posting that 16 dogs had been poisoned earlier this month. Nine of those dogs died, and at last check seven more were fighting for their lives. Additionally, 60 other dogs have died under mysterious circumstances over the past few months.

“It is sad to say but we have found plenty of enemies for this project,” Alvaro Saumet, who founded the sanctuary, along with his wife, Lya Battle, said on a video posted on the sanctuary’s website.

“There are many people against this sanctuary. People who make up ill-intended stories about us, and they search far and wide for any legal technicality there might be to shut this place down,” Samuet said. “We have faced many legal processes, but thank God, even the Department of Health, Senasa and other government entities have come to keep an eye on us and have requested some changes, they have never found a reason to shut this place down.”

Owners Have Been Saving Dogs For Years

The current struggles facing Samuet and Battle and their sanctuary come as they have spent nearly a decade dedicating their lives to saving dogs and promoting animal welfare.

“We actually started one dog at time,” Battle said in the video. “But in time one sadly realizes that there are so many of them out there that sometimes no matter how hard you try, you can’t help them all.”

At first glance, Territorio de Zaguates appears to be heaven on earth for both dogs and dog lovers alike. The more than 800 formerly stray dogs on the sprawling sanctuary roam free across the lush and mountainous Central American landscape. The sun shines almost every day down on the tropical paradise, while the average annual temperature hovers around 73 degrees.

As the dogs play and bound about the sanctuary’s vast grounds, they’re escorted by volunteers carrying water in backpacks to make sure the dogs have plenty to drink, though there’s also fresh water throughout the property. Later, the dogs are fed, bathed and put to bed in sheltered structures by volunteers for the night.

Dozens of Dogs Have Died Under 'Mysterious' Circumstances

Ordinarily, it truly is a dog’s life -- that is until intruders started sneaking into the sanctuary with the intent of killing dogs.

The intruders were chased through the sanctuary, but made off in a car that was waiting for them outside the property. During the chase, one staffer was hurt when one of the intruders attacked him with a machete. The staffer, suffered what was described as a superficial flesh wound and is expected to be okay.

“This is not the first time this happens, we know that there are people who don't sympathize with our cause and want us to close this shelter at any cost,” the non profit group said in a Facebook posting. “With this incident, we believe these heartless people are responsible for more than 60 mysterious deaths over the past months.”

The group says it urgently needs to install 36 surveillance cameras and light poles to improve security as part of an effort to keep their beloved “Territorians,” the dogs who live at the sanctuary, as well as staffers, safe. Also needed is money to pay for new pens for the dogs. During a severe storm in December seven dogs died when strong winds ripped roofs away and sent debris flying, hitting and killing the dogs.

Visitors to the Sanctuary Welcome

Meanwhile, as Samuet, Battle and a staff of volunteers keep an eye on the hundreds of dogs in their care, members of the public are encouraged to visit the property and consider adopting a dog. The group says meeting the dogs in an open environment allows adopters to truly get to know and bond with their new pet.

Battle speaks warmly of the people who have adopted dogs from the sanctuary and have later sent photos of the dogs enjoying their new homes.

“Dogs we knew where they came from and today we can see them playing around wrapped in a sheet on a bed, and we knew maybe we found them living in a sewer, or we rescued them from the hands of people who were gonna hurt them,” Battle said. “That is what makes it all worth it.”

The Territorio de Zaguates Dog Sanctuary is in the Mountains of Costa Rica. 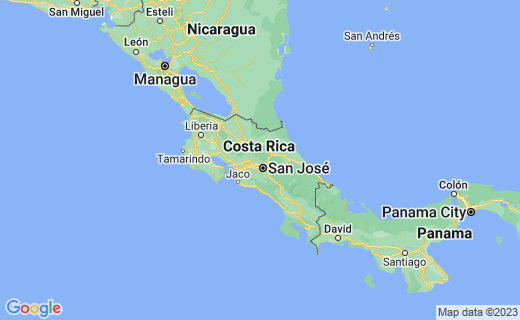