Driving 'baby' on Board

My car insurance company considers my driving history as 'good.' Even though I never had and never will have a DUI (driving under influence) record, I believe my driving skills are better than good . Car insurance companies deduct points here and there on any infractions however minor. Sometimes, ones' driving skills is a subjective opinion, just like ones' taste in food or fashion. I know people who are proud of their driving abilities and yet after being a passenger on these self-proclaimed good drivers, I would rather walk than experience close encounters with hitting another vehicle because the driver was on the opposite direction of a one-way street. For my part, the major infraction I ever had was racing this guy who was tailgaitng me on Seward Highway in Alaska that happened to be a segment of a construction zone. The tailgaiting driver zoomed past my 80 mph speed onto the Anchorage Bowl. I decided that it was not worth the trouble. But trouble was headed my way. I saw the State trooper lurking on the side of the highway. To my relief, he went after and hailed the tailgaiter to stop. By this time, I pretty much slowed down. Just a few minutes over when I looked at my rearview mirror, the State trooper's beckoning lights were on to me. Out came "S**T," metaphorically swearing. The State trooper's 'two bird with one stone.' probably earned him his ticket quota for the day. Well, that was several years ago, a $300 something lesson learned.

I have had bouts of speeding more moderately and not falling off the 'bandwagon' of hell driving during my honeymoon phase with Dallas. Everytime I screeched my car, it would jolt me again and again that "Oh boy, I must be careful. I have a baby on board now." My reckless driving by my standards, did not meet my dog's approval.

Then, the moment of truth came one day after just arriving on the parking lot at a dog park. I was doing the automatic habit of rolling up the windows by pushing the button from the driver's seat, when I heard a big yelp. My dog's head narrowly escaped the closing window of the backseat of my car. I opened the car door. Out she hopped--then sat down. Dallas looked at me and began her barage of doggy rant. Oh, she was angry and obviously complaining and nagging me. "I'm sorry that mommie is so stupid. I'm so so so sorry. I will be careful next time." Dallas went on and on for several minutes with that sing-song rant of hers. "I' promise I won't ever do that again. I'm so so sorry. That was stupid. I'll let you know when I'm closing the window. So, so sorry." Dallas continued berating me. "Alright, I heard you! It won't happen again!." Then she stopped, turned around and headed towards the park to play.

This precious just told me off, her way. Emphatic and direct how afraid she was; how she could be easily forgotten because of inattention; how she could get hurt at anytime. Her language of distress was never more foreign.

I am not alone anymore. I am accountable for my actions to another. I have a permanent passenger in my car. Driving Miss Dallas means together safely and happy. 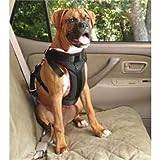