I grew up on a farm and all of our chickens laid the normal everyday white to brown eggs. Nothing fancy, just your normal ordinary eggs. Then I discover that chickens actually lay colored eggs, most lightly tinted greens and blues, but colored. That intrigued me.

Then the other day I ran across an egg anomaly that looked like it just couldn’t possibly be real. It had to be fake photography or something. It was called an egg inside an egg. As I researched further I discovered there are many egg anomalies that I had never heard of. But before we discuss these anomalies, it is good to understand the egg laying process.

It takes approximately 10 days for a yolk to mature within a follicle in the hen’s ovaries before it is then released into the infundibulum where it is fertilized by stored sperm.

In the vagina, the outer part of the egg’s shell is formed. The egg is passed from the body through the vent.

An Egg Takes Its Time

Ovulation usually takes place in the morning. The total time it takes for an egg to form is anywhere between 24-26 hours. The white of an egg takes about 3-1/2 hours to form. The shell membrane takes approximately another 1-1/2 hours. The process is finished when the shell has been formed.

I have seen some double yolked eggs, or double yolkers. These are generally produced by a young hen (pullet) who has recently started laying eggs and whose reproductive system has not yet gotten the timing of their yolk production correct, releasing two at once. If multiple yolks are present two is the norm; however an egg has had up to nine! In the video below they are cracking open a double and a triple yolker! Notice how big the eggs are compared to how big the others in the carton are.

I remember getting a few of these when gathering eggs. These eggs felt a whole lot like a water balloon, just a little firmer; and the membrane feels tougher and more textured than the surface of a balloon. The membrane can be quite translucent.

As an egg is formed, after the membrane is secreted, a shell is supposed to be formed around this. If things don’t flow just right, the egg can slip through without producing a shell.

Egg Within an Egg

Double shelled eggs are so rare that no one knows why they happen. It is thought that they might be formed when an egg becomes reversed or stopped in the reproductive system and joins with another egg that is also passing through. This video shows someone discovering an egg inside an egg. (They knew something was up because of the size of the egg.)

Odd shaped eggs like those seen to the right are an accident.

The egg in the top picture did not rotate properly in the oviduct and much of the shell material was deposited in one location.

Eggs with no yolks (no-yolkers) are also called “dwarf eggs”, “cock eggs”, “wind eggs” or more commonly “fart eggs”. This type of egg is usually the result of a hen’s first attempt at laying eggs. Because these eggs lack the yolk, they are smaller than your typical egg.

The term "cock egg" is interesting because when the term was developed people really thought they were laid by roosters and that was why they had no yolk (Yolk indicates fertility).

This wraps up our egg hunt. Do you have an unusual egg you would like to feature in this article?

Chicken and Egg: A Memoir of Suburban Homesteading with 125 Recipes
Buy Now 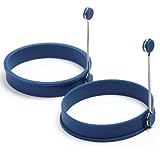