If you read my hub about Western riding boots, you know that I have years of experience with horses and with horseback riding. As I explained in that hub, most of my horseback riding was done Western style. I did, however, go through a stage where I rode English and did a little jumping. During that time period, I wore English riding boots instead of cowboy boots. I just didn’t think cowboy boots would exactly go well with English riding. I remember that I had a hard time finding English riding boots that would fit. I wanted a really tall pair, but it was tough finding riding boots wide enough to fit my large calves. Nowadays you can find wide calf riding boots in lots of stores and online, but back in the seventies, they weren’t so common. If you’re not a horse person, you might be wondering why horse riding boots are even important.

If you’re going to spend any significant amount of time horseback riding, you need a good pair of riding boots. Yes, they’re stylish, and they’re certainly a traditional part of riding, but horse riding boots also serve a utilitarian purpose. Actually, equestrian boots serve more than one function. Generally speaking, they help you to be a better and safer rider. Think about how English riding boots are designed. Saddles have straps, nooks, and crannies that are notorious for being able to grab a rider’s skin and flesh, and tall riding boots protect the leg from this assault. The foot part of the riding boot has a prominent heel that prevents the foot from sliding through the stirrup. The soles of most riding boots are usually fairly slick, so that in case of an accident, the rider can easily kick free of the stirrup and not be dragged by his mount.

When you look at old paintings of fox hunts, you’ll notice that the riders are usually wearing tall black riding boots with a beige cuff at the top of the boot. This type of boot is referred to as a top boot. For more formal fox hunts, the riders might wear dress boots. These are tall, stiff boots, usually black, that come just below the knee. In addition to formal fox hunting, these boots are traditionally worn for show jumping and for dressage.

Another type of English riding boots worn in fox hunting and show jumping is the field boot. These are tall boots that have laces at the ankle, making them more flexible than dress boots. Field boots are also worn in hunt seat equitation, a forward seat riding event.

Jodhpur boots are boots that come just above the ankle. The traditional jodhpur boot has a leather strap that wraps around the ankle and is fastened with a small buckle. Competitors in saddle seat often wear jodhpur boots.

Paddock boots are also similar to jodhpur boots. They’re ankle boots, but they usually have laces or a zipper instead of an ankle strap. Informal styles of paddock boots are often used for casual riding instead of in horse shows, and because of their comfort and construction, they’re good for wearing around the stables.

It’s extremely important to get the right fit with riding boots. If the boots are too tight, they’ll be uncomfortable, and you won’t want to wear them. If the boots are too loose, they won’t provide you with stability, and they could actually be dangerous. You want a boot that fits your foot snugly. You also want a boot with a foot that’s not too wide to fit easily into the stirrup. If the boots are tall, the shaft should also hug your calf. When you’re showing your horse, you want to present a sleek, streamlined image, so snug-fitting tall boots are important. Also, with tall riding boots, buy a pair that’s a little too tall. Once they’re “broken in,” the shaft will usually shrink in height about a half-inch to a full inch.

Which type of English riding boots are best? That mostly depends on whether you’ll be wearing the boots in shows or just for pleasure riding. Some competitions require a certain type of boot, so you might not have a lot of choice in the matter. If you’re purchasing riding boots for a child, you might want to consider jodhpur boots or paddock boots, as these are usually less expensive than taller riding boots. Chapettes, which are relatively inexpensive, can always be worn with short riding boots to make them look like tall boots. The chapettes will also provide pretty much the same protection you’d get from tall riding boots. You might also think about buying boots that are insulated. Insulated riding boots can be real “foot savers” in cold weather. Another aspect to think about is whether you want pull-on boots or boots with zippers. Obviously, the boots that have zippers are much easier to get on and take off, but some riders don’t feel that the tall zippered boots provide as much of a streamlined appearance as pull-on boots do. As far as brands go, there are several excellent makers of boots for English horseback riding. One of the most popular with riders is Ariat boots. 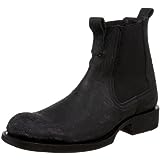