Top Facts About the Komodo Dragons of Indonesia

What Are Komodo Dragons?

Komodo Dragons are a huge species of lizard, essentially a bigger version of monitor lizards. They are occasionally referred to as Komodo Monitors or the Dragons of Komodo whilst the scientific latin name for them is Varanus Komodoensis. A fully grown Komodo Dragon can grow up to 3 meters (10ft) in length, almost a meter longer than an adult Monitor Lizard.

Although these amazing creatures walk on all fours and are generally horizontal they are known to rear up on their hind legs, supporting themselves with their hard tail. It is believed that these kinds of images of Dragons standing on their hind legs inspired much of the science fiction adventure movies of the mid twentieth century that featured unknown giant species living on remote previously undiscovered islands. One of these movies inspired by the Dragons of Komodo was King Kong, first made in 1933.

Komodo Dragons are a gravely endangered species with the total global population estimated to be no more than 5000 but potentially as low as 3000. The entire population of Komodo Dragons is based in a relatively small area of Indonesia in the region called Flores. There are a total of 5 islands that have populations of Komodo Dragons, the most famous of which being Komodo Island.

Where do Komodo Dragons Live 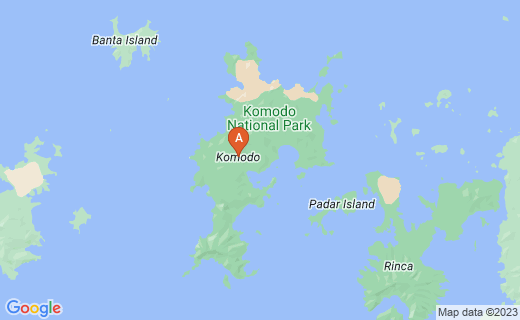 Why are Komodo Dragons Endangered

On Flores, the largest island that has wild Komodo Dragons, human encroachment and population growth has been the biggest threat to Komodo Dragon habitats here. On the islands of Rinca, Komodo, Padar and Gila Motang there is no human population and the entire area is protected under national park status as Komodo National Park.

However, the populations of egg-laying females has fallen so far that the population can only grow very slowly leaving it in a perilous position with there being such small numbers around. If a natural disaster were to hit any of the Komodo habitats it could potentially cause the death of a whole species.

The issue of poaching, all too often a significant threat to sustaining the populations of endangered species, is also a threat to the on-going future of Komodo Dragons. However, the national park protection has reduced this threat somewhat.

If the threat from humans isn't enough one of the biggest threats comes from the Dragons themselves. Adult Komodo Dragons have a cannibalistic nature. It's believed that adults will only turn to eating the young if they are particularly starved but the young will climb trees where they will live in their early life until they develop the build and strength to fend off predatory adults.

Komodo Dragons are the top of the food chain in their natural habitats on the islands in which they reside. They are carnivorous and will eat whatever they can catch and kill. Sometime they will need to put up a good fight and may get injured or even killed, especially when preying on large animals such as buffalo.

They have also been known to eat humans. On the island of Komodo farmers have been attacked and Dragons have even reportedly dug up the graves of human corpses to eat the bodies.

Komodo Dragons don't kill their prey with poison - they're not a poisonous species - rather they carry a strain of bacteria that causes an infection (normally terminal) in their prey. This bacteria is present on the saliva which they pass onto their prey through biting them. Due to their slow metabolisms, Dragons can go weeks between meals.

Evolved with no Predators

Komodo Dragons are believed to have lived in this part of Indonesia for millions years. Their large size has always been accredited to the island gigantism theory where, as the biggest species present with no predators, the species has been able to continue growing with nothing holding it back. The species first became known to humans as recently as 100 years ago when they were discovered by Dutch colonists in the early twentieth century. The dragons were studied for a few years before the first live specimens were transported to Europe in 1927 to become exhibits at London Zoo.

An expedition to the Komodo Island in 1926 lead to the capturing of 12 specimens to be brought back to Europe for further study in order to develop human understanding of these fascinating creatures. W. Douglas Burden, the leader of this expedition is widely credited with coining the name Komodo Dragon.

It's possible to visit Komodo National Park where you're able to take pictures of Komodo Dragons in their natural habitat rather than taking pictures of them in a zoo. The best location in which to see the Dragons isn't on Komodo Island but on the island of Rinca. Rinca is home to around 1000 Komodo Dragons and visitors to the island have the best success in seeing them in their natural habitat. Tourist access to the National Park has been possible for the last 20 years or so but with tourism in this part of Indonesia growing all the time more and more people are starting to visit the park. This, some feel, will have a detrimental impact on the long-term future of the Komodo Dragons and will essentially turn the islands into zoo's.

It's an important issue and one that will likely get hotter in the years to come as the tourist infrastructure in Indonesia continues to improve and more and more people get lured into the exotic mysticism that has also surrounded the Dragons of Komodo.

As with almost every other species known to man, Komodo Dragons are present in zoo's all over the world, the vast majority of which being in North America (over thirty). Although nowhere near the level of a Panda or a Tiger, Komodo Dragons are seen as a premium exhibit in a zoo and come at a high cost both in the procurement and in the maintenance. Keepers have been known to comment on how tame the Komodo Dragons become and how they quickly get accustomed (if little interested) in seeing humans in close proximity to them.

It's interesting that even the supposedly wild Dragons on the island of Rinca have become tame with some of them spending their days hanging around the Rangers hut - although this is a habit that started years ago when park rangers used to throw meat out to attract the Komodo Dragons to that visitors were able to see them. This practice was stopped several years ago however.

Test Your Knowledge in this Fun Quiz