Probably the most spectacularly colored member of the genus Centropyge (The dwarf angelfish family), the flame angelfish has become one of the most recognizable marine fish in the industry. Almost everyone in the hobby has at one time or another either purchased one or considered getting a flame angelfish. That says a lot about this fish.

Flame Angelfish in a reef aquarium

I'd say in terms of price, the flame angel sits comfortably within the $40 to $50 USD bracket which is very slightly on the high side. I say very slightly because its well below the price range of other rarer dwarf angelfish such as the multicolor angel or the golden angel.

Although it is commonly stated that the flame angel hails from Hawaii, it is actually collected around Cook Island, Marshall Island and Christmas Island. Flame angelfish from Hawaii are rare and are supposed to have a very specific coloration and body pattern : All red with thin narrow stripes.

I've personally never seen one in real life so i cannot comment on my likes or dislikes on Hawaiian Flames. But from photo's ive seen of them, they really are all red. No orange whatsoever.

Like many marine angelfishes, the flame angel can get rather aggressive. Especially towards other members of the genus. In a small tank, with no other competitors, there is a very good chance the flame angelfish will start bullying its smaller or less aggressive tankmates.

Most people only add dwarf angelfish last into their saltwater aquarium, giving their other fish time to get well established. If a Flame angel was your first addition and you planned on adding other fishes, there's usually hell to pay. This applies to tanks smaller than a 75 gallon. One Flame Angel per tank is general rule of thumb, unles of course they are a mated pair. Otherwise there will be definite signs of hostiliy between the two. One of them may even end up getting killed.

A Flame Angelfish in a 180g

An aquarium no smaller than 50 gallons should be used to house a flame angelfish. I've heard others that recommend 30 gallons but that is the absolute lower limit when it comes to these saltwater angelfish. Not to mention the bullying that will occur if there are other smaller fishes in the tank. Ideally, you want something like a 75 gallon or larger.

They require holes, nooks and crannies to dart in and out of so adjust your liverock to this type of scape. If you have corals beware! Flame angels can (but not always) begin nipping on your corals. Every single member of the genus is prone to this kind of behaviour. No exceptions. There have been stories of dwarf angels that leave corals alone for years only to turn on them overnight. That's just how it goes with these guys.

A Flame Angelfish picking off live rock and the substrate

Angelfish from the genus centropyge are all grazers in the wild. They constantly scan the rock for food items throughout the day, much like surgeonfish. They consume algae, tiny crustaceans and sometimes even detritus.

In a saltwater aquarium they should be given a balanced diet. A wide range of foods should be given, variety is important. Feeding them a specific food for too long can be detrimental to their health. Although there have been hobbyists that have fed them new life spectrum for long periods of time with no ill effects. It seemed like they were doing great in fact.

They should be offered a good pellet brand like New Life Spectrum, a balanced frozen food with both meat and algae (Formula two, Mysis Shrimp, Krill) and algae/nori sheets if possible.

A very good food for dwarf angels is the Pygmy Angel Formula, produced by Ocean Nutrition. Ingredients such as kelp, krill, squid,squid, vitamins and minerals and much more are used in this frozen food. The cubes are frozen after these ingredients have been mixed into it. Pygmy Angel Formula is only available in frozen form i believe.

I am not a fan of brine shrimp as nutritionally, they don't offer much. Adult frozen artemia do not offer much more to the fish than roughage, which is fibre. They can get fiber just fine from krill or mysis shrimp, both superior foods. 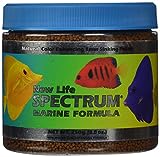 Breeding the centropyge loriculus has only been pulled off successfully by a handful of people. And these people had a lot of money powering their effort, i'm talking state university type funding.

Breeding in the wild takes place after the sun sets. The female or females (they're haremic) wait for the arrival of the male each evening. After the male chooses to breed with one of them he nudges the female up the water column until they are properly positioned to release both sperm and eggs. The fertilized eggs float up to the ocean surface where they float until they hatch or are eaten. Upon hatching they begin feasting on the planktonic soup that is present at the surface. Which is mainly larvae from other fishes and invertabrates. It is not clear at what point (or at what age) they begin migrating back down towards the reef but such an event must occur. 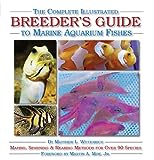 To furthur illustrate how they spawn i've added a video to the right capturing a different species spawning. Those two are Centropyge Joculator. They are very rare and they are very expensive. They easily go for more than 10 times the retail price of a flame angelfish.But enough about the Joculator, back to breeding.

I mentioned earlier that there were only a handful of people that managed to breed flame angels. Why so few? How did they do it? The secret was the food they used as feed for the larvae. It is an undisclosed type of copepod nauplii, that's right, not the tiny copepods, but their babies. The find was a monumental breakthrough in this area of research. Frank Baensch of the now defunct Reef Culture Technologies (Hawaii) was one of three that collaborated towards the effort. As a result, R.C.T was able to raise not just the flame angelfish but a host of other dwarf angelfish inculding rare species such as the Japanese Pygmy Angelfish (Centropyge Interruptus).

Unfortunately R.C.T closed its doors a few years ago though it is still pending a reopening, much to our delight. Captive breeding by them enabled anyone with a few hundred bucks to get their hands on some truly rare species of dwarf angelfish that would otherwise end up somewhere in Hong Kong or Japan where they are sold for OBSCENE prices. That's where most of the worlds rarest marine angelfish end up by the way, Hong Kong and Japan. They go where the big money is.

Meanwhile, hobbyists are still trying their hand at the task but have faced nothing but failure. Larvae fed on rotifers are almost certain to perish.and its looking like an impossible task for the serious hobbyist or even the small scale breeder. The key, has to be the food. If we knew just what copepod they were breeding for feed, hobbyists might just have a break. Until then we're left with buying them from retailers, and dreaming of the rare and exquisite Centropyge Interruptus in our tanks.

QUESTIONS OR COMMENTS? LEAVE THEM IN THE BOX BELOW.

The most detailed and comprehensive book the marine angelfish to date. No other book comes close. Covers all known species.