Rogue cat lover. Shelter kitty mom who learns by her teeny mistakes. Fortunately, they guide me with compassion for my human limitations.

Our Adopted Cat - Abandoned Tabby Who Joined Our Family

I knew better. I absolutely, positively knew better than to leave my clarinet out in the living room. I don’t usually leave it in the living room, but my friend and clarinet teacher, JR, came over and we gabbed and played music for about two hours. It was a full day and by bedtime I was satisfyingly tired. I just forgot. So, there it stood overnight: my prized clarinet (it is my father’s - played by him in high school bands before WWII). It should have been dissembled and securely locked in its case, but oh, no. There it stood in the living room upright on its peg like a playground jungle gym screeching out to any self-respecting, energetic cat “COME EXPLORE ME!”

And, we certainly have the energetic, curious cat. His name is Skeeter. We absolutely adore him.

Sometimes a person gets lucky. I did not. When I awakened the next morning, the clarinet was on the floor. Clarinets do not like to be knocked from tables onto the floor. They have all sorts of keys and levers which are not built to withstand force any stronger than a finger pressing firmly upon them. 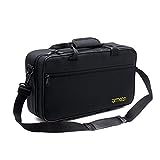 ammoon 600D Water-resistant Gig Bag Box Oxford Cloth for Clarinet with Adjustable Single Shoulder Strap Pocket Foam Cotton Padded
From now on, the clarinet gets safely packed in something like this!
Buy Now

I couldn’t very well scold Skeeter for he was just following his instincts. His feline curiosity would require him to approach the new device, thoroughly sniff it, probably taste it, and otherwise conduct a complete inspection. His “hunter instincts” would lead him to subdue it at all costs. What I wasn’t expecting was his sense of belonging to the two humans of the family, both of whom are musicians. To the extent that a son imitates his parents, I think our danged little nixnuts (mischief maker) tried to play the clarinet.

I may be flattering ourselves and can definitely be accused of anthropomorphizing. However, I have circumstantial evidence:

Skeeter has seen his human “dad” playing sax and clarinet. He has seen me, his “mom,” playing clarinet. These instruments have a small, thin tongue-depressor-like stubby stick called a reed, which is on the mouthpiece. Part of the reed and mouthpiece are held in the mouth (duh.) Could Skeeter have observed and memorized this behavior of ours, just waiting for his chance to give it a try? I offer the following photographs.

The first is a normal reed in working condition. The top edge is one smooth arc. The reed is flat.

How a Reed Looks After a Tabby Cat Plays It

The second photo shows the reed from my clarinet after I discovered it on the floor. First, the reed is broken: that jagged crack and bend makes it useless. Furthermore, notice the many ragged chips along the arc of the reed. That could not happen in a simple fall. No. This is the work of Skeeter. He chewed the heck out of it!

Ok – it might have been one the other cats, Sammy or the Goddess, but I doubt it. Sammy is a scaredy-cat, literally. Once the instrument fell with a crash, he would have been high-tailing it to the farthest room away. The Goddess? I think she couldn’t have been bothered. Even if she were a tiny bit interested in the strange, tall black stick, Skeeter would have beaten her to it.

The Humans Do It

I propose that after curiosity got the cat to approach the clarinet, he recognized it as a tool the humans put in their mouth to make lovely sounds. (Skeeter and the Goddess do stay in the room when we practice.) Being the unique feline that he is, Skeeter decided to imitate us and try to play it. No one ever taught him how we human jazz cats position our lips and teeth to keep the reed intact. So, Skeeter jumped to the task with more enthusiasm than knowledge and just destroyed the heck outta that reed.

It’s my theory of the case, and I’m sticking with it.

In the meantime, I learned my lesson the hard way. Although the clarinet seemed playable, I discovered in my next band practice that it was damaged. Most luckily, our wonderful local woodwind repairman diagnosed it and fixed it. His declaration that it could have been much worse (which also equals much more expensive) reinforced my commitment to protecting my clarinet from our furry kids.

I think I’ll teach them drums.