Many people love to spend from a few hours a week to every day watching the antics of the little feathered friends that pass through their gardens. If you do this on a regular basis, then it is very easy to get attached to them almost intimately, but there is far more to our common garden birds than first meets the eye. Below our 10 facts about our beloved garden birds that may surprise you:

Is that your Blackbird?

They're Not Your Birds

If you enjoy watching garden birds, then it is very easy to become attached to our feathered visitors, but some of them actually maybe foreign impostors. During the autumn and winter months, as the nights draw in and the weather turns colder, all sorts of different bird species flock over from Northern and Eastern Europe. These include starlings, siskin’s (a species of finch), bramblings (another species of finch), thrushes, robins, chaffinches, gulls and even pigeons. These birds choose to pass through or stop by in our gardens because they are increasingly becoming the best places in the UK to acquire food, water and shelter. Many of our gardens can supply these three amenities, making them the ideal places for birds to spend the winter, when their summer homes turn cold and bitter. The movement of our garden birds isn't just confined to passing from one country to the next.

There’s also plenty of movement across the UK, for example blackbirds that live in the east of the UK, will move to the West and South West in the Winter, just as their cousins from the continent arrive in the East, this shifting of different populations is called chain migration. Be sure, also to listen out for different bird songs in the winter, as you may be lucky enough to detect a foreign accent.

The birds that come into your garden; have secret cycles that you may not be aware of. Basically, they will spend their time travelling between their favourite feeding grounds throughout the day. Studies have shown that at any one you only see around 10% of the birds that visit your garden at one time. So to put it another way, if you regularly see 10 blue tits, then you probably have 100 individuals using your garden throughout the entire day.

When we design Bird Feeders, we think that we’re being helpful, but not all of the feeders you see in the shops, have the Birds in mind. Most Garden Birds, if given the chance like to take food away to eat in the relative safety of a bush or hedge. Feeders are often placed out in the open, so that we can enjoy unhindered views. But, this strategy could be a recipe for disaster, as most gardens harbour a lethal killer, the domestic cat. Cats and other predators that target small birds find it much easier to hunt when they have an open target. Birds tend to enjoy their food under cover, which is why it is important to place feeders and bird tables near any cover, so as to give them a chance to escape from a predator, whether it be a cat or a hawk.

Also, certain larger birds like blackbirds and robins cannot cling to feeders, so you may witness the comical sight of a robin attempting to hover in order to obtain food from a feeder.

When we watch garden birds we often get excited when we bear witness to a bit of bickering or even a full blown fight. But are they any patterns to this? Do some birds get picked on more than others?

Basically, how it works is that the biggest bird wins. The blue and great tit will bully their smaller cousin, the coal tit, and all three in turn receive their share of abuse from the nuthatch, a sparrow sized bird that resembles a small woodpecker. Speaking of woodpeckers, if one of those should turn up, then the nuthatch will flee, and almost all birds will flee at the sound of a pigeon’s flapping wings.

Hierarchies also exist within certain species, particularly the more gregarious ones. Dominant pigeons, for instance will often bully younger or weaker birds, pushing them to the outskirts of the group, making them more vulnerable to predators than the others. I remember seeing a pigeon in my garden, and I’ll tell you now, he was the skinniest, tattiest pigeon I’d ever clapped my eyes on. I really do think that if it wasn't for the food we were giving him, he would have died long ago. He used to get abuse from the others, but he always managed to get enough. We saw him every day for about two months, until one day he didn't turn up, the next day was the same, and the day after that. After a week, we concluded that something had happened to him, I remember feeling quite sad, because I’d even given him a name, Scruffy. Another species that has a complex hierarchy is the house sparrow; the males have black markings on their face and breast that resemble a bib. The sparrows with the biggest bibs are the dominant ones, a good analogy is the insignia used in the Armed Forces. So when you see two male house sparrows bickering, it’s usually two individuals of near equal rank.

The Eye of a Bird

More Than Meets The Eye

All birds need excellent vision, as like us they rely on their sight more than any other sense to interpret the world. So if a bird suffers any damage to its eyes that impair its vision, then death is a near certainty. All birds have four colour receptors in their eyes, meaning that they have the ability to see light that is outside of our visual range. Even to us, the blue tit’s blue cap and the robin’s redbreast are distinctive, but in ultra-violet, which is what birds can see, they are both brightly contrasting beacons or signals.

Many birds that come into the garden, such as finches and sparrows are natural seed feeders. But seeds are an extraordinarily dry food to eat, so they must be able to wash them down in some way. In winter, this becomes especially hard because of the freezing conditions, meaning that birds have to exert more energy than usual to find water. If you can make your garden into a water haven, then you will quickly see more and more birds coming into your garden. Birds need water, not only for drinking, but also for cleaning their feathers, which must be kept in trim condition at all times.

A Couple of Disinfectants

In the UK, the last few years have witnessed an alarming decline in finches. The culprit is thought to be a disease called Trichomonosis, caused by a parasite that lives in the bird’s upper digestive system, over time it blocks the bird’s throat preventing it from swallowing, thus resulting in death from starvation. It’s usually passed on by birds feeding each other during the breeding season and through ingesting food or water that is contaminated with recently regurgitated saliva. If an ill bird is caught, then it is impossible to save it.

But you can help to stop the spread of the disease by monitoring the levels of food you put out and keeping your feeders and tables clean, and also ensuring that the surrounding areas are kept free of mouldy food and droppings. The best method to clean bird feeders is to use disinfectant solution mixed with water. Another tip is to rearrange your feeders and tables regularly to stop bacteria and parasites from settling in one spot. Always keep food in a cool and dry environment, and away from pets and other animals to avoid any contamination.

Many species of birds like to cache or store their food, just as squirrels do. Jays are well known for collecting acorns and hiding them away as an insurance policy when harsher weather appears. The nuthatch will collect various nuts and wedge them into tree bark or holes in a wall and then cover them over with bark or moss. Magpies and other crows will store carrion, just as dogs do. The smallest birds such as coal and marsh tits also store food, by sneaking food off the bird table and hiding it away before the bigger birds barge in. 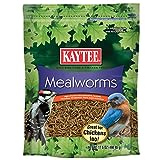 Each garden is different, and the unique structure of it will favour some birds over others. By knowing the right type of food and the right type of feeder to support your local birds, you’ll hopefully provide the perfect feeding ground for them. In the spring, live mealworms are vital for overworked parents desperately trying to feed their chicks. Robin and thrushes, in particular love these little wriggly treats, and if they are live, it helps to give them much needed moisture. During the colder months, all the birds are fattening up to survive the long winter, so fat balls and suet cakes can give them the crucial fat and energy required to keep them going. Fat balls and suet cakes always draw a crowd whenever I put them on the bird table in the winter. However, I must stress that these should only be made in the winter, as the warmer temperatures of spring will cause the fat to melt, causing them to go off quicker.

Sunflower seeds are good because they are rich in proteins and unsaturated fat, but they do require a considerable amount of effort to remove the husks, and that's energy that birds cannot afford to waste. It's best to put these and kibbled nuts out in the autumn to save them the effort of doing it in the winter. Niger seed is a favourite of the goldfinch and siskin, but be aware that you have to buy a specialist feeder because the seed is very small and will just drop out of the holes of a conventional feeder.

Peanuts are favoured by almost all birds, especially tits and sparrows, they also help to give the birds a protein and energy boost in the winter. But do not put whole peanuts in the spring, as they may choke young birds.

Try to avoid bird food packaged in mesh bags, as more often than not, a bird will get its claws and feet stuck in the mesh with disastrous consequences.

The Robin Singing his Heart out

The Song of War

We all love the beautiful and melodious songs of some of our most cherished birds. But what we often forget is that these songs are part of territorial displays. The autumn is a tricky time, as the adults now have to compete with the new kids on the block, the fledglings that were born in the spring, they all want a piece of action. The robin, to us is a charismatic, cheeky but friendly bird and many gardeners often speak of their robin who perches on their garden spade, in reality he’s using the spade to survey his territory, pumping out his red breast to intimidate any potential interlopers. On the occasions when they have to fight, they often battle it out to the death. The dawn chorus, is something we often take for granted, but to the birds it’s everything, they are basically letting the others know that ‘I’m still here, and this patch is mine’.