The Gentoo Penguin is the third largest of the Penguin species. It will reach a height of up to 90 centimetres and a weight of 8.5 Kilogrammes. Black and white in colour it has brown eyes, a reddish orange bill and yellowish feet. The black and white colouring acts as camouflage in the sea and makes them much less visible to predators like Leopard Seals. The Gentoo Penguin belongs to a group called the 'Brush Tailed Penguins' and has much longer tail feathers than other penguins. Gentoo is pronounced 'JenToo'.

As with all Penguins weights can fluctuate quite widely reaching their heaviest just before moulting. The moult (molt) takes place in December-January and will last 2-4 weeks. Young birds moult for the first time at about 14 months. Moulting Penguins will usually stop feeding altogether in the wild and not go to sea. In captivity they may still take some food and may also still swim a little. The Gentoo Penguin will be at its lowest weight when feeding and guarding chicks.

Gentoo Penguins are classed as 'near threatened'. There are around 300.000 wild pairs. They are found in the main on the Antarctic Peninsula and on the Falkland and South Georgia islands.

Pygoscelis papua papua is the larger of the two sub-species and lives and breeds on the sub-Antarctic islands.

Pygoscelis papua ellsworthii breeds only on the Antarctic peninsula.

Gentoo nests are made of pebbles and may be quite large in size. These are constructed entirely by the males as part of courtship behaviour. There is much competition for pebbles and stones for nest building. Stones are often stolen from each others nests which will result in arguments.

The breeding season takes place once a year and will start between June and August and end around November time. Though the Gentoo Penguin will mate for life pair break ups are not uncommon.

Typically two eggs are laid (1-3) usually three days apart and the parent birds will take turns sitting on these for the up to 37 days of incubation (34-37). Eggs weigh in the region of 130 grammes and hatchlings will weigh around 96 grammes. Chicks will then remain in the nests for around a month before moving out into a creche. They will remain in the creche for a further two months until they are fully moulted out of the juvenile plumage. They will then go to sea for the first time. Chicks become independent of their parents twenty or so days after their first sea trip.

Chicks will not usually be ready to pair up and breed till they are three to four years old but have been known to do so at two.

In the wild birds can be expected to live as long as 15 years whereas in captivity they may well reach double that.

Some birds make adventurous sea trips and isolated specimens have been found as far away as the coasts of Austalia and South Africa.

Feeding penguins will typically hunt at depths of up to twenty metres though they are capable of diving dowm to seventy metres of more. They rarely stay below the water for longer than two minutes but are capable of staying down for seven minutes. The Gentoo is the fastest swimming penguin with speeds of up to 36 kilometres per hour being recorded.

The largest population of Gentoo Penguins in captivity is held by Edinburgh Zoo which has in region of 120 birds. They breed them extremely well and have supplied them to collections all over the world. In 2010 six year old birds Pygoscelis papua papua were sent to Dubai Mall's Underwater Zoo. 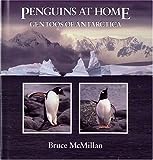