The Sulcata Tortoise, or African Spurred Tortoise is the third largest species of tortoise and spends most of its long life continually growing.

The African Spurred Tortoise at the Monte L Bean Life Science Museum at Brigham young University weighs in at about 70 pounds and is probably in his teens (he was about 40 pounds two years ago when I first wrote this!). When he is full grown, he will be much older and could possibly weigh anywhere between 100 and 200 pounds! He's one of the most popular animals and when I work at the museum, I receive many requests to bring him out to show to people.

Most people won't have the opportunity to see a Sulcata Tortoise and get to learn more about them, so this Hub provides as much information as possible about them as well as a video of the Bean Museum's tortoise eating one of his favorite snacks!

There are three types of turtles:

You can tell the difference between the three types based on their habitats, and based on where they live, you can tell what they eat. Turtles live in the ocean or sea and feed on fish and underwater vegetation. Terrapins live near ponds and small bodies of water and spend just as much time out of the water as in. They feed on similar diets as turtles, but also eat insects.

Tortoises spend their whole lives on land, mostly in desert or grassland environments. As such, they feed almost exclusively on vegetation. Because the tortoise moves about a half mile an hour, it's very unlikely that he will ever get the opportunity to eat much else.

Oatis, the giant tortoise at the museum munches mostly on a mixture of veggies and grass, but his favorite snack is crunchy lettuce or celery.

Video of a Giant Tortoise Eating

Facts about the African Spurred Tortoise

The Sulcata Tortoise has two spurs beneath his chin which he gets his name from. When he is ready to mate and finds a female, he will use those spurs to try to flip over a competing male tortoise. You can imagine how this would be effective, because it is very difficult for a large, heavy tortoise to right himself.

However, this can also be deadly, because the tortoise's lungs are located just beneath the top of his shell. If he is flipped over, all of his weight will be pressing down on his lungs and he has a high chance of suffocation.

The sulcata tortoise also has very armored-looking legs. When he is threatened, he will pull into his shell and wrap his legs around his face to protect them. The back of his shell curves down into a flap that covers and protects the back of the turtle and his back legs, which are not as protected as his front legs.

The African Spurred Tortoise is the third largest tortoise in the world, and one of the largest to live in Africa. They regularly grow over a hundred pounds, and have pretty long life spans, although the oldest in captivity is not more than 60 years old. Their shells are a part of their body, so they do not shed their shells as some people may think. Their shell is similar to bone or keratin and grows with their body.

Fun Fact About the Turtle Family: Did you know that turtles (remember they live in large bodies of water) cannot pull their heads and legs inside their shells? If they did this, they would sink and be unable to escape their predators. Instead, turtles can swim up to 12 miles an hour! 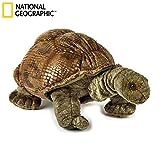