The Great White Sharks of the Mediterranean Sea.

Asp52 has a keen interest in all things British and has a particular affinity for great white sharks. Asp52 is well read in this subject.

A handful of fatal Shark attacks are recorded each year around the globe, yet their numbers are slender when compared to the number of deaths attributed to those who are killed by domestic pets. The mosquito is responsible for millions of human deaths each year, yet is nowhere near as feared as the dark-eyed predator of the salty oceans.

North America and Australia see the bulk of Shark attacks or unexpected encounters. But the Mediterranean Sea also experiences a few encounters with these fearsome predators. In times long past, it was usually the Tuna fisherman who encountered the local Shark populations as they brought in their catch. But with the increased use of a camera, mobile phones and social media. A greater level of evidence is continually recorded despite the dwindling numbers of these often misunderstood marine creatures.

An Apex Predator in Action.

Sharing the Environment with Sharks

It would surprise many a tourist, if they were to be told that the blue waters of the Mediterranean Sea actually hold close to fifty species belonging to the Shark family. Although the majority of these fish are relatively small and confine themselves to the deeper channels of the sea. It would surely shock and concern many who visit the sunny coastal hot spots, if they were to learn that the Mediterranean is also home to ocean going predatory fish such as the Tiger Shark and the "infamous" Great White Shark.

Their numbers are not as large as say Australia or South Africa, but despite official records chronicling aggressive interactions over the last century. Many tourists are unaware of the majestic creatures that share the warm water with swimmers and divers.

It is hypothesized that larger shark species swam into the Mediterranean and became stuck in the new sea due to firm water currents. Scientists have discovered that the Great White Sharks of the Mediterranean share a genetic ancestry with those that can be found around the coast of Australia. It would have been very easy for a group of pregnant females to follow the North African coast and become confused by strong magnetic fields. Once they entered the Mediterranean and birthed their pups, a new colony of Great White Sharks would have been established. 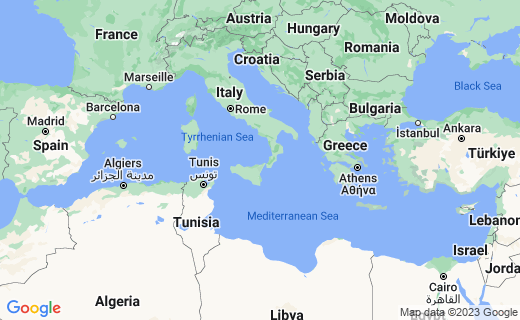 Recorded and Verified Locations of Great Whites in the Mediterranean Sea

There are also reports of Great White Sharks in Croatia, Montenegro, Israel, Egypt, Malta, Corsica and many other coastlines around the region.

The Habitat of the Great White Shark

The warm waters of the Mediterranean Sea offers a rich marine environment which offers a wide variety of prey fish. Sardines are abundant along much of the western coast of the Mediterranean. This fish is a staple foodstuff for juvenile Great White Sharks, the majority of reported sightings seem to congregate around Greece, Italy, Turkey and Croatia.

In the last hundred or so years, Croatia tops the list of areas where a shark attack is most likely to occur. The UK comes second on the list, but most of these instances are attributed to small bites from by-catches when unloading trawlers of their haul.

Great White Sharks also patrol the southern shores of the Mediterranean. Tunisia, which is a popular tourist destination, has many reports of large sharks in its waters. There are many fisherman who have encountered large sharks through their profession and a Great White weighing in excess of 1900 kg was caught there in recent years.

What do the Great White Sharks Feed Upon?

It is entirely likely that the Mediterranean Sea is used as a nursery and when female Great White Sharks give birth, their appetite is naturally suppressed to avoid eating either their own offspring or other juveniles. The suppression of appetite only extends to birthing females and there is evidence of cannibalistic behaviour by other Great White Sharks from across the globe.

The Mediterranean Sea has a wide variety of fish that would satisfy juvenile Great Whites. There are also many big game fish such as Swordfish and Tuna, which provide a good meal for any resident Shark population. There are also Seal colonies spread across the Mediterranean Sea, especially around the Greek Islands. The Seal is a favoured prey of the Great White Shark, especially as they are full of blubber and have enough calorific content to allow the fish to not worry about hunting its next meal for a few days.

Should you be scared swimming in the Mediterranean Sea?

The population of Great Whites in the Mediterranean is small and like all sharks, the Great White faces very real dangers to its long term existence. Illegal hunting, fishing nets, pollution and a dwindling supply of its prey are severe threats to their future survival. It is believed that their may only be a few hundred Great White Sharks in the Mediterranean Sea and the more mature adults may not be resident for most of the year. Juvenile Great Whites are at risk from other predators and they exist upon a fish based diet.

Over fishing in the Mediterranean Sea has had a drastic impact on the younger generation of these apex predators. Experienced fisherman have noticed a decline in the numbers of fish caught over the years and many of the fish that the juvenile Great Whites feed upon are as critically endangered as the Sharks themselves.

The Great White Shark is offered protection by law by a number of countries that border the Mediterranean Sea. Israel, Egypt and European Union member states in the region ban the hunting of Great White Sharks in their territorial waters. International agreed treaties on the preservation of the Great White Sharks is implemented in the region yet enforcement over such a wide area is very difficult to police. Many countries have or are attempting to limit interference in areas know to be Shark birthing grounds. Yet tourism and divers, will continue to encroach upon these sensitive areas.