Guppies and How to Raise and Breed Them

I love to raise live bearing fish, especially guppies. The colors are beautiful and make any aquarium better.

Guppies are extremely popular and I love to raise them myself. My guppy community consisted of four or five fish tanks. The largest was a 20-gallon where I kept my male guppies. With my males (and in some of the other tanks) I had several other varieties of fish to add color and interest. Examples were a Siamese Beta ( I liked to put one beta fish in each tank to rescue them from the tiny conditions that most put them in and for their beautiful colors.), Neon Tetras (one of my favorite with their beautiful colors and because they form a school and swim together), swordfish and zebra fish. Usually I added mystery snails and catfish for bottom cleaning too.

Then I had my female guppy tank and a couple of baby guppy tanks that were used for breeding and holding pregnant females. The pregnant females had to be held in floating isolation containers that were especially made with holes for letting the babies escape. Mother guppies will in many cases eat their young so this precaution is needed.

The gestation period runs around 21 to 30 days depending on the warmth of the water they live in. The aquarium water should be kept between 68 to 81 degrees or 20 to 27 C.

The warmer the water the faster the birth. Just don’t get it to warm.

I enjoyed mixing up the colors of the adult guppies to get a nice selection and would take contrasting colored fish and put them in one of my breeding tanks. They would stay for a month or so until the female looked pregnant and then the male would be returned to the largest tank with the other males and the female placed where she would not be a danger to her young.

The young were kept in a tank by themselves until I could see the differences between them and separate them before they got old enough to breed.

Once the babies were born I would move them to a special tank where I kept all the young ones. Here they could grow up in peace without the fear of getting eaten by the adults. Once the baby guppy got large enough I would gently net them and place them in either the male or female tank.

Watching them grow up and see their colors develop was very enjoyable. I would sometimes sit for an hour or more in front of the difference aquariums and just watch them swim around. There were other types of fish in the adult tanks to add to the fun. These extra fish were safe to have with the guppies and added to the color and verity.

The extra fishes included mollies, neon tetra and similar types. I always included a betta fighting fish to each adult tank. I felt sorry that the the bettas in the fish stores would be kept in those tiny bowls and I would rescue some so they could live a better life. It is terrible that some use these beautiful fish for fighting. So I felt real good to add one to a tank. However watch out that you never mess up and put two males together.

Guppies can be found at your local pet store or even in Walmart. However to get bigger variety or fancy show ones you need to check out online places. The video below is one place.

On a side note I kept mystery snails with my babies and accidentally learned how to breed and raise them. This is a secret that keeps these snails high priced so I won’t reveal it and spoil the business. The conditions just happened to be correct for them to multiply and these snails were sold to help finance my guppy hobby. 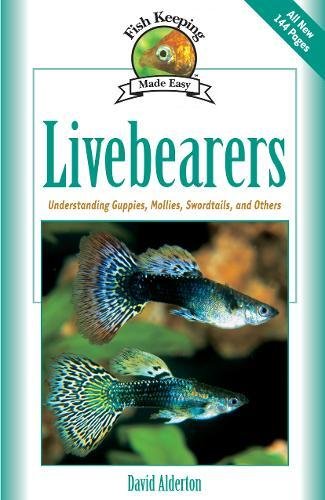 This book will answer most of the questions that you still may have about the care of guppies and other popular fish. . The author at one time planned to be a vet but allergies forced him to focus on writing about his love of animals. Most readers give this book 5 stars.

I enjoyed developing new colors and would take a plain one like the one in this photo above and breed it to a fancy female. Then I would choose the best from the offspring and work with these. This was a slow but rewarding hobby and I would need several tanks to keep them all separate.