Hawks And Buzzards Of The Florida Everglades

Hawk Or Buzzard: The Difference Between Them

Hawks and Buzzards are two birds that are often confused. This is because a hawk is a buzzard, but a buzzard is not necessarily a hawk. In the Old World, Europe that is, buzzards are a group of birds that in America are called hawks.

Buzzards and hawks are medium sized raptors with broad wings and stout bodies, most commonly in the genus Buteo. These birds are often seen as nuisances because of the damage they do to barn yard livestock such as chicken, pigeons, rabbits and other small animals that humans like to keep. Because of the connotation of buzzard with nuisance the word has come to refer to any problem birds in America.

The word buzzard in America refers to any bird viewed as a pest. This includes vultures, some hawks and falcons. The American Black Vulture and the Turkey Vulture are both commonly know by the name of buzzard but are in fact their own genus and neither a buzzard or a vulture.

Vultures are a classification of bird that includes two groups, Old and New Word. Old world vultures are in the family Accipitridae and are closely related to eagles, kites, hawks and buzzards. They range through Europe, Asia and Africa.

The River Of Grass

Hawks Of The Florida Everglades

The Florida Everglades is a unique fresh water habitat in the southeastern United States. The system is actually a giant river that flows from Lake Okeechobee in the north all the way to the Bay of Florida in the south. The lake is fed by the Kissimee River which caused the lake to overflow during the wet season. The lake and river are both very shallow, the river is only a few feet deep and the lake not much deeper. The astonishing fact about the river is that it is over 60 miles wide. This slow moving, shallow and incredibly wide river has formed a unique ecosystem of marsh land, lakes, rivers and estuaries also known as the river of grass. The river flows between stands of cyprus, making it one of the largest freshwater ecosystems.

The River Of Grass is home to fish, amphibians, reptiles, small mammals and millions of other birds. The amount of diversity provides food sources for nearly every type of North American bird of prey. Out of the eleven species of North American hawks there are six or seven seen in the Florida Everglades over the year. Some live there year round and others as part of their migratory territory.

The Red Shouldered Hawk is a widespread raptor whose breeding range spans eastern North America and extends west to California and south into Mexico. Most Red Shouldered Hawks are year round residents where they are found which has led to the classification of several sub-species. While they all look alike, the one living in Florida and the Everglades tend to be lighter in color than the more northern specimens.

Red Shouldered Hawks, like most other raptor species, mate for life. The females also tend to be larger than the males, another trait common among raptor species. Adults have a reddish head and a brownish head streaked with white. The wings are darker and the entire body is barred with the most striking bars appearing on the upper wings. The shoulders appear red when perched, giving the bird its name.

The Sharp Shinned Hawk is a familiar sight in most of the Americas. The species has four sub groups that combined inhabit most of North, South and Central America. The Sharp Shinned Hawk, or Sharpie, is one of the smallest hawks and the smallest in North America. The wingspan is about twenty four inches and body of adult females is less than 8 ounces. Sharpies have short stumpy wings compared to other hawks and is one of their identifying features. Sharpies are often confused with Coopers Hawks and to make matters worse the plumage can vary from sub species to sub species. Only the Northern Group is present in the Everglades.

Sharpies like boreal forests where they can hunt for smaller birds. Prey is taken by surprise as the Sharpie darts through the trees and branches at high speed.

Red Tailed Hawks Love To Hunt In The Everglades

The Red Tailed Hawk is the most wide spread and adaptable hawk in North America. Also know as a chicken hawk because of its size and the size of its prey, it inhabits every biome from western Alaska and Northern Canada to California, Florida and the West Indies. Although they rarely attack a bird as large as a big as a chicken they do attack large prey. Adults weigh in the range of 1.5 to 3.5 pounds and have wingspans up to an over 4 feet.

Adults are brownish all over, with a paler, speckled under side. The Northern Group has three different color variations; darker, lighter and rufous. The darker and rufous birds only make up a small portion of the population and account for about 20% of all Red Tailed Hawks. All forms prefer terrain consisting of forest and open land, where they can find a perch to await their next meal. Despite this preference they make their homes in a wide variety of locations including woodland, coastal regions, mountains and urban areas. Red Tailed Hawks love the Everglades because the mix of fresh water, forests and open land allow them to hunt a wide variety of prey.

Coopers Hawk is a medium sized bird, for a hawk, with a distribution across North America. It is found from southern Canada to northern Mexico and from the east coast to the west. There are no sub-groups but it is recognized that western birds are smaller than the eastern residents. Coopers Hawks and Sharp Shinned Hawks are sometimes confused for one another but the Coopers Hawk is much larger and sits up straighter when perched.

Coopers Hawks have short, rounded wings and a long tail with dark banding. The undersides are a lighter buff color with the banding typical of hawks. The face is lighter in color as well with a dark cap on the head.

Coopers Hawks tend to be year round residents, especially in the southern part of the range but the northern population will migrate to warmer climates in the winter. The birds hunt by ambushing prey in the forest and shrubs. Hunting for food this way comes with some risk for the Coopers Hawk, who sometimes mis-judge their targets. Cornell University Ornithology Department studied the skeletons of over 300 Coopers Hawks and found that over 20% of them had some type of healed fracture of the chest bones.

The Short Tailed Hawk is a small to medium sized hawk with a broad tail that appears "short" in flight. The bird has broad, rounded wings and a stout body that help the tail appear to be short in comparison. There are no sub-groups but there are two distinct color variants, a light and a dark. The light variation is common throughout most of the range but in Florida the dark version is standard.

The Short Tailed Hawk is a common sight in tropical and sub-tropical areas, ranging through Central America and into Florida. The birds range extends all the way into southern Georgia but individual here will migrate south in the winter to the Everglades, Keys and into Mexico and the Yucatan Peninsula. 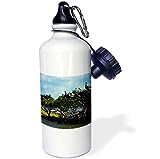 The Broad Winged Hawk is a small to medium sized hawk common to the eastern part of North America during the breeding season. The population migrates south into Central American and Brazil in the winter. Some of the more southern US individuals remain in one place all year. The Broad Winged Hawk is not threatened but its numbers have been in decline because of deforestation in parts of its range. The birds like to breed in forested areas and hunt in wetlands, a combination the Everglades has plenty of. The combination of cyprus forests, marshland and open waterways provides ideal conditions for the Broad Winged Hawk.

These hawks are basically brownish with some shading and barring. The body is banded with light and dark stripes, the head is darker and the wings are darkest of all. The wings are very wide and stumpy looking when in flight.

Tips For Hawk And Buzzard Identification