Hay Evaluation: Getting the Most Hay for Your Money

Your horse's hay has become a huge expense, blamed on skyrocketing gasoline prices and extreme weather conditions. Last year North Carolina was under a severe drought and hay was nowhere to be found in our state. Floods and wildfires will impact hay prices this year. Hay imported from other states, due to the whole supply and demand thing was expensive. I paid on an average of $10 a bale during the winter months for grass hay. This spring we had a pretty good growing season and hay is being baled everywhere you look. Even high-end housing developments are having their open-space-grass made into hay.

When I was working with 4-Hers in the horse program we learned some basis guidelines for visually evaluating hay: maturity at harvest, texture, foreign material, aroma, and color. You can further learn hay's nutritional content by having a sample tested through your state's cooperative extension service. But, the visual evaluation is easy to learn and can tell you if the hay is of high quality.

Sun bleached hay with a high percentage of stems

When judging the Stage of Maturity at Time of Harvest if you find large, coarse stems and seed heads the plant was more mature than desired at the time of harvest. An abundance of leaves and lack of seed heads what you want to find. The leaves hold the most nutrition and therefore have the most food value for the horse, and the horses find it most palatable.

Next feel the hay for its Texture. Large, long stems, which are hard and rigid, are much less desirable than small, flexible stems because the horses will not want to eat the coarse hay. Your money is down the drain if the horse will not eat it, even if you paid less for it.

There should be no Foreign Material in your hay. Look closely for insects, weeds (which can be poisonous), and trash. There should be no sticks, wire, or other trash in the hay. Be especially aware of alfalfa hay, which can have a bug in it called the blister beetle. It is poisonous and can cause death if eaten. Moldy hay should never be fed to a horse since it also can cause illness and death. Mold will appear as a grayish-white dust when the bale is slapped, or as a white flaky substance in tightly packed sections of the bale. Mold can make the horse sick and so moldy hay should not be fed to horses.

Smell the hay. The aroma should be fresh and sweet. If it smells musty or moldy then the hay was not cured or stored properly and mold is present.

We like our hay to be green in Color, but should not have that as our only criteria for judging hay quality. Naturally green hay is usually high vitamin A and protein content. A dark brown color is a sign that the hay was heat-damaged, which may cause mold. Light brown hay that rates high in all other factors is okay. It has been exposed to the sun to long and bleached, but that does not harm the hay except for losing some vitamin A content.

Sometimes hay looks okay from the outside, but can be moldy or have trash inside. When buying a load of hay ask the supplier to open a bale so you can see the inside, or reach into the middle of a bale and pull out a handful to examine. Follow these guidelines so you will get the most hay for your money, and the best for your horse's well being.

The Book of Mules: A Guide to Selecting, Caring, and Training
Buy Now 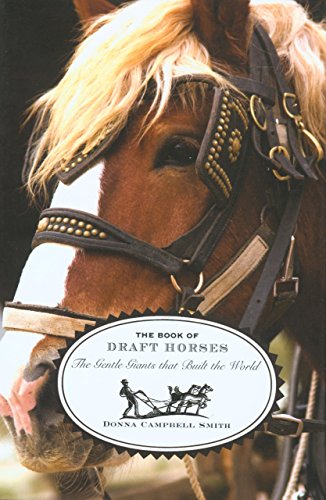 The Book of Draft Horses: The Gentle Giants that Built the World
Buy Now

The Book of Miniature Horses: A Guide to Selecting, Caring, and Training
Buy Now