Horses do not have much variety in foot color, unless they happen to be owned by little girls who like to embellish them with polishes, then they may even glitter. But, the natural colors of the horse’s hooves are basic white, black or brown, and combinations of the two called striped or parti-colored hooves. Not saddled with fashion mores of humans, they can wear mix-matched combinations with one horse sometimes sporting hooves of different colors on each leg.

You will also notice that the stripes on the horse’s hoof are always vertical, never horizontal. The reason for this is that pigment follows the horn tubules, which run vertically down the hoof wall.

Nutrition and good hoof care will accentuate the intensity of the hoof’s color. Adding a fat supplement to the horse’s feed such as oil or black oil sunflower seeds will give the hoof a natural glossy surface. Cleaning the hooves with a brush and wet sponge, then applying a hoof dressing when making a public appearance is a nice grooming touch. There are various hoof polishes, comparable to women’s nail polishes, on the market. These are often used on show horses, but can be damaging to the hoof if not removed immediately after the event.

Old writings and folklore say white hooves are weaker than dark hooves. But there is no scientific backing to that lore. It is a myth that color has anything to do with the strength or weakness of the hoof, so whether dark, light or striped, it really doesn’t make any difference in hoof quality. 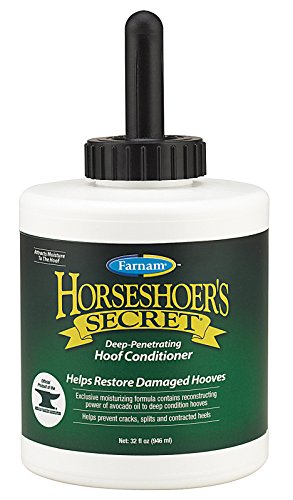