How To Stop Your Malamute From Counter Surfing

Why Do Dogs Counter Surf?

The theory is that dogs counter cruise or counter surf because they want to be like their human counterparts.

They see us preparing food, standing upright and they really just want to emulate our behaviors.

This author almost agrees with that theory because I've planted flowers before while my three malamutes were beside me and had them dig them right back up ten minutes later. I did get the impression that they were trying to "help" me in their own way though with disastrous results for my plants. When I planted the plants with them out of sight, they never bothered them.

That said, I do think certain dog breeds and certain dogs in particular are more food motivated and the temptation to grab something that was obviously left out for them is harder to overcome.

The fiend in the picture below is my 1-1/2 year old malamute. However, her 3-year-old uncle is fondly named The Hamburglar and for good reason. That dog has snagged more food than I care to think about and made enemies of most of my family members who visit on occasion.

So how do you stop your dog from carrying out this natural though objectional behavior?

Training--and more training if you happen to be working with a malamute--or three.

An ounce of prevention is worth a pound of cure they say. It's true in this case as well. Some basic rules that usually serve to eliminate the problem: 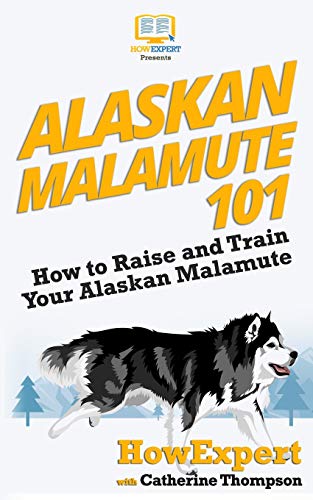 Breaking Bad Habits in Dogs: Learn to Gain Your Dog's Obedience and Trust by Understanding How It Thinks and Behaves
Buy Now

Don'ts for Training Dogs To Stay Off Counters

These things are counter productive and will likely reinforce the behavior rather than help curb it.

Training Malamutes to Stay Off Counters

This author is very good at training malamutes--most of the time. However, this is one bad habit that has been very hard to break in my dogs. Two of my three dogs are horrible thieves even though they are well versed in the command "Leave it!" and I can drop anything in front of them and they will leave it alone.

The problem is most of the time they steal something without someone catching them.

Griffin the 3-year-old malamute ate 11 sauerkraut and pumpkin muffins. Had I added in the 1 cup of chocolate chips the recipe called for, we would have been on our way to the emergency dog hospital probably. As it was, this was an extremely "toxic" experience in terms of what it did to his digestive system--and the olfactory sense of the poor souls (us) who were sleeping in the same room with him.

In an effort to curb this bad behavior once and for all, I decided to get tough. I decided to set a booby trap for one or both of the culprits and try to nip this unacceptable habit in the bud. I can say that it worked 100%---so far. The proof will be whether it works in all situations and on all occasions in the future, but at least we have a basis on which to build.

My method for stopping counter surfing:

This method worked very well for Gabby after only one try. I have had a dog cookie tied to the bottle of pennies and have moved it all over the kitchen and dining room for a week. She hasn't gone near it. I also have not seen her jump up on the counter since or even act like she was thinking about it.

The funniest added benefit is that Griffin somehow figured out that the bread on a string was just "too obvious." Though he was sorely tempted, as evidenced by the fact that he did laps around the counter island all day long, he never went for the bread. He even gave it a huge amount of space as he passed by it, turning to see if it was following him apparently--and eventually just stayed out of the kitchen. He seemed to sense that there was something ominous in the bottle of pennies.

Even funnier was that he was lying in the dining room when Gabby grabbed the bread and when the bottle of pennies crashed to the floor, he went running to the bedroom.

Will this work in the long term to break their counter cruising habit? Time will tell but at least for now, it seems to have worked.

Other Ways to Break the Counter Cruising Habit

If you watch the clicker video below, the trainer gives great detail and this method seems to be extremely effective. With malamutes, I had success with clicker training which then evaporated.

My dogs became quickly conditioned to the treating portion and if there was no treat, there was no response. I tend to think this is because they are highly intelligent dogs who figure things out quickly. Once they do, it almost becomes a game to get them to do what they need to do--unless you keep changing it up.

Another method to train your malamute to stop jumping on counters is to attach him or her to a long lead and give them free reign within striking distance of something on the counter or even a low table.

As the dog approaches the tempting object, a sharp reprimand with the leash is given alone or with a sharp warning sound to discourage them from this behavior. Repeated over time, this can be an effective way of breaking the habit.

However, the most important fact is that you want the dog to remember this behavior when someone is not present. That's the tricky part.

In my case, I resorted to the booby trap idea because I had tried other methods and they were not always successful. In our case, the introduction of other people at times also seemed to encourage our dogs to try to steal food!

Another point to be made is that some dogs are more food motivated than others--Griffin seems to be perpetually interested in food no matter how much he eats. For many reasons, deconditioning is my goal with my younger ones since they seem to share a passion for taking what isn't theirs!

Remember though that no one method is the only way to go--do what works best for you and your dog.

Also keep in mind that with a malamute, the training is lifelong. It's never over and you have to always be thinking on your toes if you want to stay ahead of these gentle giants.