How to Treat Conflict Induced Aggression in Dogs

At times, dog owners report that they own a dog with a Dr Jekyll and Mr Hyde sort of personality. Often, they complaint that their dog acts often quite sociable towards people and then out of nowhere, comes that unexpected growl, snarl or bite. From this behavior often stems the statement ''my dog just bit out of the blue''. Indeed, these dogs appear to be social and excited one moment, fearful or aggressive the next. But what triggers such substantial changes in mood? This form of aggression is not that uncommon and actually even has a name: it is called  ''Conflict Aggression'' and indeed conflict is at the base of such behavior problem.

Conflict aggression takes place when the dog is affected by two different and quite opposite states of mind. On one hand the dog is excited and eager to meet that new intriguing person, but on the other hand the dog is perhaps fearful of the way this person moves or talks. Some of the most common combination of states of mind are generally excitement mixed with anxiety, fear or aggression. Owners therefore are often confused by the dog's mixed behaviors since often he will approach the stranger on his own initiative and then out of nowhere will fearfully retreat or worse, exhibit aggressive behaviors.

This form of aggression is often reinforced with time as the dog gradually learns that each time he or she growls or snarls, the expected ''bad event'' does not take place. For instance, the dog is hyper and excited upon meeting a new person. Then this person reaches out quickly to pet the dog and the dog reacts by growling. Since the growling likely got him out of an uncomfortable situation and the imagined ''threatening situation'' did not not take place, the behavior is enforced and very likely repeated next time. 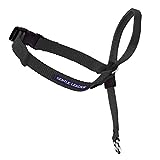 A good approach would be to ensure the dog settles down and acts calmly before exposing him to stimuli known to cause a reaction. The dog should therefore be taught to heel or sit down calmly, before being exposed to the situation. Excitement therefore should be discouraged and the new person should not move suddenly or reach out too quickly. Desensitization (exposing the dog gradually and regularly to the situation, ultimately putting the dog up to success) and counterconditioning techniques (encouraging behaviors that are incompatible and therefore replace the previously learned behaviors). Harsh training methods should always be avoided in these cases.With time, the dog should learn that there is no real threat and will be more accepting of the situation.

The use of a head halter is often recommended to ensure good control when dealing with behavior problems including aggression. This will help quickly gain control of the dog who lunges or attempts to bite. A light correction may also be given with the head halter by gently pulling upward. Dogs are not viscous, schizophrenic or crazy, with consistency, patience and time, conflict induced aggression can be managed and the viscous excitement/aggressive cycle can be finally broken.

Handbook of behavior problems of the dog and cat, Volume 1