How to Treat Scale Rot in Snakes - Part I

What is Scale Rot?

Scale rot, also known as necrotic or ulcerative dermatitis, is a disease that snakes and other reptiles can get. The animals usually get it from being in a too humid, warm environment. This makes the reptile vulnerable to becoming infected with bacteria. Most often the bacteria comes from exposure to contaminated feces. Excessive moisture can come from water spilled from a tipped over water bowl and having the bedding, such as newspaper or paper towel, absorb it. There are other types of bedding that hold moisture better, like soil, coconut husk, or aspen shavings. If urates and feces are not removed often, this can cause the bacteria to multiply rapidly and increase the likelihood of infection.

Take Your Reptile to a Vet Right Away!

Scale rot is a disease that needs to be treated immediately. It can begin mildly. One or two patches of scales will look brown, dry and flaky. If left untreated, these areas will spread and eventually turn into blisters, then open lesions. Necrotic dermatitis left to progress this far will be very difficult to treat. I have created a video below giving tips on how to treat scale rot on a snake at home. However, it is essential to take your pet to an exotic veterinarian for a professional opinion and treatment plan. If you see any unusual reddish-brown spots on the body of your lizard or snake, get it checked immediately. Scale rot can be cured relatively quickly and easily if caught early.

Video I Made Demonstrating How to Treat Scale Rot

Here's a Link to My Channel for More Snake Videos 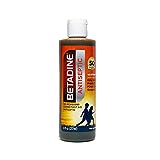 "Hey guys, this is Power Ball Pythons and this is my lovely female snake Marzipan. She is a kingpin. She is very curious and loves to explore and unfortunately, she has a very mild case of scale rot. So we're going to be giving her a bath today and I'm going to show you guys how to treat scale rot. Let me see if I can find a patch to show you guys what scale rot looks like. It's kind of hard with her on camera to see because of her coloring. There's a patch right here. You see how the brown's a little reddish and discolored? It makes the scales look a little rougher too.

So I'm going to be using 1% Betadine Solution and I already put it in the water. You'll want to use slightly lukewarm water, slightly warmer than lukewarm. You want it to be like 85 degrees. Don't do anything too hot or cold because it'll scare the snake, it'll shock them. So, basically you're just going to want to soak her for about 20 minutes. Obviously you keep an eye on her. Sorry I don't have a see-through lid, so I'll just cut that part out. Basically though, after you're done letting her soak in the solution, you're going to want to rinse her in clean water then let her dry off. Put her back in her tub. You know, just disinfect her tub with some bleach water solution. Put triple antibiotic on her, on the outside scales, and you do this on a daily basis. A mild case like hers, she'll shed soon, and it'll be completely gone.

For more neglected cases like rescues, or something happens and the scales rots a lot farther along... You know, you're going to have to have to do this several times, maybe a couple months through several sheds and yeah, that's pretty much it. Well, I wanted to mention that I live in Mobile, and honestly this place, (sigh) is really, really humid! It pretty much rains every single day. I'm one of those rare ball python breeders that have to worry about too much humidity, and yeah, I actually had to fix my racks about a month ago when the rainy season, the tornado season started again. So I'll talk about that too in a later video, about how I aerate and regulate humidity in my racks. That's pretty much it. Just uh, soak her everyday and put some antibiotic on her. Alright, thanks guys."

Marzipan Felt Better After Her Time in the Bath

Look Forward to Part II on How to Treat Scale Rot!

There is going to be a second video and article on treating scale rot. It will cover cleaning and disinfection of equipment, the application of antibiotic cream, detailed photographs, and how to prevent the spreading of infection to your other pets in more detail. I will include the link when it it completed.

Have any of you dealt with scale rot before?