Trimming a dog's toenails can be a daunting task. There are several reasons for this such as:

To make the task easier get a pair of clippers made for the job. It will make the job easier because they are made specifically to hold the dogs claw in its natural position; a semi-circle, instead of flat like a human toe clipper. Most dog toenail clippers have a protective shield that slides over the slot so the toenail won't go through the clippers too far. This is a big plus for people with wiggly dogs but don't like the sight of blood when too much nail is cut-off.

Below you will find a variety of dog toenails. From a clear/blond color to the pitch black color. As you can see, the clear/blond nail gives the person trimming the nail a clear view to the blood vessel running through it, whereas the black gives away none of its secrets within.

Referring to the image at the right, the nail should be trimmed up to, but not into, the blood vessel that runs through the toenail. Dogs that have clear or blond toenails this blood vessel running through it is very easy to see. Dogs with dark brown or even black toenails this is vessel is not visible at all.

"Trial and Error" is not the best method to use when your dogs toenails are too dark to see. This will only cause the dog to become fearful and panicky on subsequent toenail trimmings. The best thing to do is the nail "long". Meaning, instead of taking the chance of nicking the vessel and dealing with the mess and pain it ensues, just cut the tip of the nail, leaving it longer than you would think it should be. In other words, be on the safe side. The toenail has been left too long if it clicks on the floor when the dog walks.

Trimming a little dogs nail is a lot easier than trimming one on a large dog bar far. For the large breeds you'll need an assistant with a strong grip, yet a calm voice, to help make the dog relax. Yelling, "No" or "Sit" is not going to get you anywhere when you have a dog that's upset about the process.

When my dogs were growing up, and now, I always make sure I touch them and handle their various appendages, so that when a time comes that I need to trim their toenails or let the veternarian look into their ear or hold a tail, they are used to it and it won't frighten them. If your dog is only accustomed to having his tummy rubbed or chest and head scratched, then when its time for any other body part to be touched, and its usually at an inconvenient time, its going to be upsetting. So when you're relaxing with your doggy in front of the t.v. run your hands down his leg to his feet and handle each toe gently and the toenail too. Then run your hands down his tail, don't pull on it, but just feel it, get him used to being touched. It can make things much easier in the long run when you need to be able to touch his toes, tail and ears.

If you do clip off a little too much of the nail and it starts to bleed, press your finger on it until it stops. There are also blood clotting powders available just for times like that. A stiptic pencil, used by men when they nick their face, can burn. This might not be first choice but if its all you have available you may have to use it if finger pressure isn't stopping it. It may look bad but it will stop bleeding if you keep the finger pressure on it. 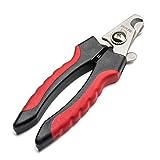