Adrienne is a certified dog trainer, former veterinary assistant, and the author of "Brain Training for Dogs."

You may have heard that there are some treats that are far better than others, perhaps you even heard that dogs will do somersaults for them, but how true is that? Truth is, when it comes to selecting rewards to reinforce behaviors, one must remember that it's ultimately the dog who decides if the treats are really going to be valuable enough to make him want to repeat good behaviors. While it can be likely that there are some dog treats that are particularly appealing to dogs, either because they have a strong scent or they are plain and simply yummy, the last word ultimately goes to the dog.

As a dog trainer, I often hear dog owners say "Yuck, these treats stink so bad, there is no way my dog will want to eat them!" so they just skip them and purchase other types of treats. Then, I give them a sample of the stinkiest treats I have and they are amazed at how well their dog responds to them--(only once the training session is over, I tell them they're made of tripe and liver). Apathetic dogs, bored by so-so treats, come to life. Their face brightens up, their tail wags and their bodies quiver in anticipation. So an important rule of dog training is to remember that it's up to the dog to decide what is reinforcing and not the owners.

And the same of course goes to people. For some people, having a boss give them a festive day off is far more rewarding than getting paid double and working on that holiday.These people may find spending time with their loved ones so valuable that they rather enjoy that than getting paid double. To a person though who is in a difficult financial situation and who has nobody at home to celebrate with, those extra dollars may be a better reward.

After talking to a dog owner who told me that her golden retriever would do anything for a game of fetch, while another owner remarked that her dog would rather go on a three-day-food strike than go fetch a ball, I thought it would be a good idea to write about extrinsic and intrinsic reinforcement. As the name implies, extrinsic refers to something external, while intrinsic refers to something internal, and in learning theory reinforcement is anything that strengthens and increases the probability of a behavior. In the next paragraphs, we will be going more in detail in these forms of reinforcement.

Examples of Extrinsic Reinforcers in Dogs

As mentioned, the value of rewards are in the eye of the beholder. So these following examples of extrinsic reinforcement may not apply to all dogs:

To give a plain and simple explanation, extrinsic reinforcement, also known as " contrived reinforcer or arbitrary reinforcer" is reinforcement that comes from an outside source. Extrinsic reinforcement is valuable when an animal or person is not intrinsically motivated. For example, a child who isn't too eager to do a math assignment, may feel more motivated if he's given a cool sticker after he's done. This reward given on a frequent basis can work well enough to make the child more motivated to solve math assignments in the future.

In dog training, an example of extrinsic reinforcement is giving a dog a cookie or giving him something else he likes such as a toy or access to his meal. This external reward usually comes from the handler and is provided so to make the activity more pleasant by allowing the dog to associate the activity with the reward. The reward therefore helps reinforce an activity that the dog doesn't find self-rewarding on its own.

A good way to put this is thinking of a dog saying "what's in for me?." Contrary to popular belief, dogs don't perform to merely please us. According to the Association of Professional Dog Trainers, "dogs do what they do ultimately because it works for them. " Those who abide to the theory that dogs should obey just to please us so there's no need for dogs to be rewarded, will most likely find themselves with a dog who is difficult to train because the dog won't be able to discern whether he's done something right as there's no reward history to rely on.

To sum it up: extrinsic reinforcers derive from external sources other than the behavior itself and are typically contingently provided by the trainer. (Source Handbook of Applied Dog Behavior and Training, Steven R Lindsay)

Examples of Intrinsic Reinforcement in Dogs

As mentioned, the value of rewards are in the eye of the beholder. So these following examples of intrinsic reinforcement may not necessarily apply to all dogs:

To give a plain and simple explanation, intrinsic reinforcement, also known as "natural reinforcement" is something that occurs internally, something that is self-rewarding and resides internally within the individual. A person may feel a great sense of accomplishment after performing a dance routine, while another may feel happy to run on the gym's treadmill. These activities are basically an inner reward the person doing them gets from the experience of the activity itself. To make another example, let's think about jogging. To some people, jogging makes them feel good so just starting to move makes them intrinsically feel invigorated and happy. To some others, it's a chore and in order to jog, they need some form of extrinsic reward to get them going such as seeing their weight go down, bragging with their co-workers or beating their opponent.

When it comes to dogs, some dogs (think many retrievers!) may find the act of chasing a ball rewarding enough that no other form of reward may be needed other than getting the ball tossed again and again. In these dogs, the reward of chasing the ball is intrinsically rewarding enough that they don't need any other form of extrinsic reinforcement. Others dogs who do not enjoy the game may instead need some other form of external reinforcement to get them going. You may therefore find the need to give the dog a food reward every time the dog brings you back the ball.

To sum it up: intrinsic reinforcers are enjoyed in and of themselves and are maintained without the need of any form of external reinforcement. 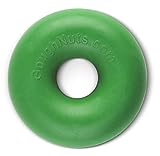 Behaviors that Persist May be Intrinsically Reinforcing

Did you notice how the above bullet list of behaviors that are intrinsically reinforced encompasses some of the most common behavior problems dog owners encounter and some of the most challenging to overcome? There's a reason for that!

B F.Skinner, the father or operant conditioning claimed: "Behavior which is reinforced tends to be repeated (i.e. strengthened); behavior which is not reinforced tends to die out-or be extinguished." So why do dogs bark, chew and chase the neighbor's cats and keep on performing these behaviors? The answer is simple. Often dogs engage and continue to engage in problem behaviors simply because they're fueled by an intrinsic reinforcer that's rewarding!

Being aware of this is important because it can really make a difference in the outcome of a selected behavior modification method. Let's say that a dog likes to bark and a trainer tells the owner to ignore the behavior as it's likely fueled by attention. After the expected extinction burst, and the occasional episode of spontaneous recovery, the barking should subside--that is, if it's fueled by the owner's attention. But what if no matter how long the owner ignores the behavior and no matter how adamant he or she is in not reinforcing it, the barking behavior continues no matter what? If so, more investigative work is needed and the trainer may be better off doing some troubleshooting before the desperate owner goes on to try desperate measures!

In such a case, there are good chances that the barking behavior is in and of itself intrinsically reinforcing. Some dogs are more vocal than others, and barking can be self reinforcing, especially if it's a way for the dog to release frustration, anxiety or stress.There are several ways you can work on reducing the rehearsal of self-reinforcing behaviors, these may vary based on context, but generally include:

Did you know? You can put your dog's self-reinforcing behaviors to good use by using the Premack Principle. Basically, ask your dog to perform a lower probability behavior and then reinforce it by allowing him to perform the higher probability, self reinforcing behavior. Example ask your dog to sit on walks and then reward him by allowing to go sniff or go mark a fire hydrant.

Alexadry © all rights reserved, do not copy.

In extrinsic reinforcement an external reinforcer must be added to reward the behavior.

In intrinsic reinforcement: no external reinforcer needs to be added as the sheer nature of the behavior itself is a reward as it's self-reinforcing.

Extinction is most likely not happening for intrinsically self reinforcing behaviors.