Is This Snake Venomous? Copperhead VS Corn Snake.

Will the real copperhead please stand up?

Here's two different kinds of snakes, however they look very similar in appearance.

One is the relatively harmless species called a corn snake. Corn snakes are members of the "rat" snake family-Colubridae. Rat snakes are non-venomous, so they have to disable and kill their prey by strangulation.

The other snake is the infamous copperhead. Members of the viper family, copperheads use their deadly venom to subdue their prey; they are anything but harmless and should be avoided!

So how do you know which is which?

As you probably already guessed, the corn snake is in the first picture, and the other two pictures are of the very dangerous copperhead snake. 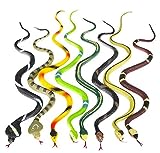 Remember, snakes are generally our friends.

Yes, it's true! Snakes are nature's terminator, helping farmers and home owners everyday. Their prime food source are rodents, which include mice, rats, and other disease carrying vermin.

Oh, but mice are fluffy and cute! Snakes are ugly!

Being cute isn't that great. Let's take the cons of mice vs the pros of snakes, shall we?

It's the Mice VS Snakes SMACKDOWN!!