Is Your Vomiting Cat Sick?

Your vomiting cat does not necessarily signal that an illness is present. A number of diseases and upsets in your cat are associated with vomiting, It is a fact, however, that cats vomit more easily than most other animals and frequently this action represents a flushing out of toxins from the body rather than an imminent illness. Some cats seem to do so almost at will, at times for no apparent reason.

A vomiting cat might expel undigested food and then eat it again. A mother may vomit her food so that her kittens will have a soft, predigested meal. As a general rule, the longer the interval between eating and vomiting, the lower in the digestive tract is the problem. Vomiting which is not related to eating frequently is associated with an infectious disease or central nervous system disorder.

The most common cause of vomiting is eating grass or some other indigestible material such as hair which is irritating to the stomach. Almost every cat experiences this at one time or another. Overeating, or eating too fast are two other common causes. If your cat vomits once or twice, but appears perfectly normal and shows no signs of illness, his condition is probably not serious and can be treated at home.

Most of the time it is possible to get a clue to your cat's problem by noticing how he vomits and what he vomits.

The following types of vomiting may be serious:

Repeated vomiting : The cat vomits his food, followed by a clear frothy liquid. This type of vomiting usually suggests a stomach irritant such as grass, hairballs or spoiled food, but also may suggest an infectious disease.

Sporadic vomiting : The cat vomits on and off but not continuously. There is usually no relation to meals and appetite is poor. The cat has a tired look. This could suggest a disorder of one of the internal organs like the liver or kidneys. It could also suggest either gastritis or diabetes. A vet call is definitely in order.

Vomiting blood : Fresh blood indicates a break in the mucous lining somewhere between the mouth and the upper small bowel. The most common cause is a foreign body, but this might also suggest the presence of a tumor or an ulcer. This condition is serious and also warrants a trip to the vet.

Fecal vomiting : If a cat vomits material that looks and smells like stool, he probably has an obstruction low in his intestinal tract or there is a penetrating abdominal wound. This condition will cause immediate dehydration due to loss of fluids and salts, and needs to be taken care of by a professional immediately.

Projectile vomiting : This is a forceful type of vomiting in which the stomach content is ejected suddenly at a considerable distance. It usually indicates a complete blockage of the upper gastrointestinal tract. It could be a harmless foreign object like a hairball or a more severe cause like a tumor or encephalitis.

Vomiting foreign objects : Hairballs, pieces of cloth, bone splinters, sticks and stones all can become too large to pass out of the stomach. These can be vomited by themselves, or with a clear frothy liquid. Kittens with heavy roundworm infestations might also vomit adult worms. These kittens must be treated.

Emotional Vomiting : Highly sensitive cats will vomit  when upset, excited jealous or in need of attention.

Motion Sickness :  Cats might suffer from car sickness. The usual signs are  restlessness followed by salivation, yawning, nausea and vomiting. Dramamine (12.5 mg) might become helpful if this behavior persists.

Your vomiting cat does not always require professional attention, but you should become aware of behavior patterns that exist prior to and during the act, in order to best treat the underlying cause.

Chronic Vomiting in Cats - Part I

Causes For Vomiting in Cats 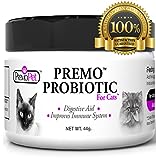