Leipzig Zoo - Zoo of the Future

Kymberly moved to Leipzig in 2011, and loves the music, arts, old buildings and wildlife in the 'little city' (small compared to Melbourne).

The Leipzig Zoo is a fantastic place for children and adults alike.

With a wide range of interactive exhibits, and the newly opened Gondwanaland - a gigantic tropical enclosure where many of the animals run free - it's easy to spend a couple of days wandering around.

Almost all of the animals in the Zoo are endangered or extremely endangered. Keepers helping to keep these animals from extinction with successful breeding programs, and re-introducing species to their native habitats.

Note: While I await approval from the Leipzig Zoo to use my own photos, all of the photos included in this article have been made available for public use by the Zoo.

History of the Leipzig Zoo

Opened in June 1878 as a small private zoological garden, and beginning with Anton, an orangutan from Borneo, the Leipzig Zoo currently exhibits more than 200 different species, over 26 hectares.

The animal collection and variety of enclosures grew until the first world war. Through strict rationing and stress, many animals suffered and died from malnutrition. With many exhibits empty, buildings becoming dilapidated, few visitors, the private zoo was sold to the local government.

Loaning animals to the film industry brought the Zoo back from bankruptcy, and allowed them to grow to 12.5 hectares, with a bear exhibit, big cats, monkeys, penguins, aquarium and reptile house.

After the closure during the second world war, the grounds were enlarged, and plans for expanded exhibits and new programs began.

Ambitious rebuilding and expansion projects are currently scheduled until 2020.

The most recent project completed was the two-football-field-sized tropical enclosure, Gondwanaland.

A huge tropical rainforest, with endangered plants as well as animals from three continents that once were connected (Africa, Asia, and South America) in the super-continent Gondwana.

You can even drift through the exhibit on a boat, for a small additional fee. This river tour is also wheelchair accessible.

This exhibit contains one of my favourite animals - Eastern quolls - the only ones that live outside Australia.

As it opened in 2012, Gondwanaland is extremely popular, and crowded even if the rest of the Zoo is empty.

As I'm not very comfortable in crowds, I rushed through, not stopping to take photos.

Best visited on warmer days, the apes and monkeys stay inside and are less active when it's cold, preferring more tropical temperatures, although there are glass-fronted viewing rooms into their heated enclosures. For the smaller Asian elephants, which are easier to keep in captivity, a large new exhibit was built for the female elephants to live together. There is a bathing pool and regular bath times, which visitors can view from below.

When I visited, it was socialization day, but the bull elephant wasn't at all interested in spending any time with the females, standing near the entrance to his inside enclosure - perhaps it was a little too cold for him. The females where happily wandering to and fro, playing with food and long branches.

The meerkats have been particularly troublesome zoo denizens, escaping from their enclosures multiple times.

A roaming exhibit modelled on an African savannah, with endangered giraffes, zebras, sable and white-necked antelopes, gazelle's, roaming freely together.

There is no solid wall between this exhibit and the public reserve, with gaps in the boundary of reeds making the outside edge of the zoo in the park, a popular spot for young children and day care groups to visit for free.

An early arrival for brunch at the attached Kiwara Lodge restaurant, just as the animals become active after breakfast, was perfect timing. It was definitely fun watching the antelopes and gazelles chase each other around, while enjoying a delicious late breakfast.

Matadi and Luena are currently the only two lions at the zoo, but are are no longer being bred due to possible inheritable genetic problems. But they certainly seem happy together, playing with soccer balls and lounging around. The Siberian tiger's realm, recently quite playful with two mischievous cubs, who are always hiding when I visit!

The Zoo maintains the world's records of the Siberian tiger (Panthera tigris altaica) blood lines, and are keeping the species from extinction with a very successful breeding program.

Siberian or Amur tigers are the largest of the wildcats on earth, capable of hunting and killing brown bears, in the Taiga forest region of Russia.

Fewer than 500 remain in the wild, with on average 30 poached each year for their fur and for use in traditional Chinese medicine.

I think the mother, Bella, was fed up with visitors watching her cubs play, barking at us to give them some peace and quiet, or warning us to keep our distance.

The keepers are known around the world for their breeding expertise, especially of the big cats (lions and endangered Siberian tigers) and other carnivores, contributing to saving many endangered species from extinction.

Most successful breeding and re-introduction programs at the Leipzig Zoo

Constantly innovating over the years, to increase revenue, attract visitors, improve conditions for animals and increase the number of their breeding and research programs, the Leipzig Zoo offers more than just a look-see at their animal collection.

Leipzig Zoo - Zoo of the Future

The Zoo's plan to become the "zoo of the future" is slowly transforming the older exhibits into a nature theme park, grouping animals into their regions. New and renovated enclosures are built to resemble the animals native habitats, as much as is possible confined spaces and a cold climate.

Ongoing development is planned until 2020, with the next step including new enclosures for the Siberian and snow leopards, and a larger walk-in aviary. Additional underground viewing rooms are planned for penguins, seals and further developments for many more exhibits.

Hours change throughout the year, but the Leipzig Zoo is always open from 9am to 6pm (later on weekends and most public holidays).

On Christmas Day and New Years Eve, the Zoo closes early, at 3pm.

Groups and families receive small discounts, and a yearly visiting ticket is available - great for families with young animal-loving children.

Brunch is served on Sunday mornings in two of the restaurants, but it's advisable to book far in advance - it's very popular!

The Zoo has great access for those in wheelchairs, with ramps and lifts in most of the main exhibits, including Gondwanaland. Wheelchairs and scooters are available for reservation. 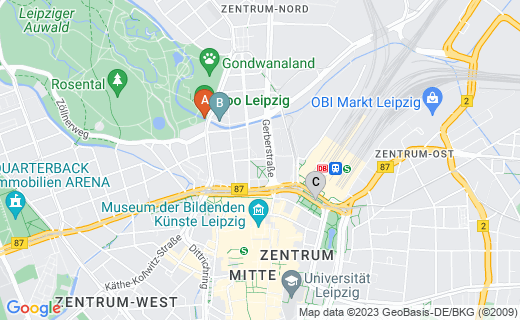 The Notenspur - a walking or biking tour around historical musical sites

Leipzig has been home to many famous musicians: Bach, Schumann (Robert and Clara), Wagner and Mendelssohn.

Wander past and through many museums, houses and monuments, and enjoy a coffee and cake at the fantastic cafe (Zum Arabischen Kaffee Baum), where many of these famous musicians met and talked.

Take a backstage tour through the Leipzig Opera, built in 1960. With historical lighting museum, costume and makeup displays, an extensive opera and ballet costume library and a tour through the technology that powers the stage, this is a fascinating morning or afternoon. Booking are essential.

How often do you take your children to the zoo?