You may well not have heard of Limoges or Limousin; I know that before I started to look for a new and affordable life in the country I hadn't heard of either of them, and yet, this rural region of S W France is world famous for its beautiful Limoges porcelain and beautiful red Limousin cattle. The Limousin bull is a magnificent beast and Limousin cows and bulls share pastures together all the year round.

The limousin cattle (sometimes misspelt Limousine cattle / Limousine bulls or Limousine cows) have evolved to survive in this region. The area is unspoilt, sparsely populated by humans and undeveloped, so it is rich in natural beauty and full of wildlife. The area is varied geographically as the eastern side is highland and near the massive central, but to the west and south west it borders the Charente and the Dordogne and there in the lower slopes and gently rolling hills, the weather is much kinder with warm summers and milder winters.

In general the farming is 'backward', in tune with nature and, to some extent, farming according to the ancient traditions and herbicides and pesticides are kept to a minimum; as a result the fields and meadows are rich in a variety of herbs and in spring and summer they are full of wild flowers.

Origins of the Limousin Cattle Race

The original Limousin cattle are an old breed, and many sources suggest that their ancestors are depicted in the 20,000 year old paintings on the walls of the Lascaux Caves near Montignac, France. The La Ferrandaise cattle from the Auvergne, a region bodering on the Limousin, is even more like the animal depicted here, (see image below).

These golden-red cattle originated in the high plateaus of the Limousin area, East of Limoges. This area is West of the Massif Central between Central and South West France, a very green area benefiting from sufficient rain, with warm summers but cold winters that can be rather harsh. These upland areas have poor, acidic granite soil which support moorland plants and trees. Limousin cattle developed to flourish under these unfavourable conditions and as a result they are tough animals.

In the past the Limousin region was isolated and the farmers developed their cattle in accordance with nature and with little outside genetic interference. Their cattle were used as working animals, for beef and for milk.

Limousin cattle are a hardy breed 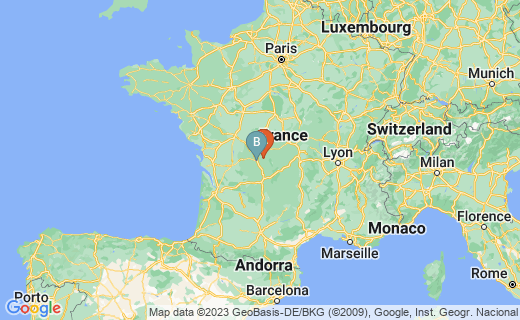 Advantages of the Limousin breed

The Limousin cattle possess several advantages that are being appreciated more in today’s farming climate – difficult economic times, global warming and a turn away from expensive, unhealthy and un-natural farming practices. Limousins are:

Several sources include ‘ease of management’ in the list of the virtues of the Limousin cattle, and I’m not sure what this means, but here in Limousin the farmers consider the Limousins to be ‘wild’ in nature and unpredictable. I know of farmers who have been hospitalized after being gored by their own cows, (yes cows not bulls). Here in Limousin the cows grow long, pointed horns, much like those depicted in the cave paintings, and the farmers tend not to cut them. I was never afraid to go into a field of Friesian cows in England but here is no way I would get into a field of Limousins.

Limousin bulls graze with the cows

In Limousin the herd is managed naturally too. The fields are full of cows with their bull and calves. The calves are born all the year round outside in the fields and you can see them still suckling from their mothers even though they are nearly as big as their mums. This is something the French take great pride in, and you can see the big, brown tourist information signs advertising this fact as you enter the region.

Limousin bulls live with the cows and calves

Limousin cows, pure and cross-bred, have demonstrated high fertility, a good milking ability, high conception rate and ease of calving. Naturally hardy and thrifty the females are smaller than most continental suckler dams allowing for increased stocking rates on both upland and lowland systems.

The bulls mature early and are known for their fleshing qualities, lighter bone, fertility, and for the extra conformation they pass to all progeny, whatever the dam. Their lighter frame ensures ease of calving.

The Limousin has the ability to produce more saleable meat in the high price cuts along with the top killing out percentage. The breed provides young but mature beef in the medium weight range demanded both by butchers and supermarkets. It is well suited to a market, which requires a consistent, quality, lean beef product.

Here in Limousin, the cattle are reared outdoors in fields and in woodlands. There are natural ponds and lakes, chestnut and oak woods and the meadows are full of herbs and flowers. In the winter they are fed on hay cut in June, and on the maize plants grown in this area for the cows. Interestingly, you can't always find corn on the cob in the supermarkets in our area as the locals regard it as animal feed!) The natural ways of rearing cattle are now being better understood and in many parts of the world there is a return to the production of grass fed beef and cattle.

In Britain and the USA there is a growing revolt against industrial agriculture. With more consumers questioning how their food is grown, grass-finished meat and dairy look like the next food frontier. In the past five years, more than 1,000 U.S. ranchers have switched herds to an all-grass diet. Pure pasture-raised beef still represents less than 1% of the nation's supply, but sales reached some $120 million last year and are expected to increase more than 20% a year over the next decade.

Cattle reared in herb-rich natural meadows are healthier, require fewer drugs and antibiotics and produce healthier meat that is lower in fat.

Developing and disseminating the Limousin breed

Unsuccessful attempts were made to cross-breed Limousins in the 1700s and again in the mid-1800s. In 1840, several breeders crossbred their Limousin with oxen of Agenaise variety. These cross-bred animals were taller, with more volume of muscling in their hindquarter but they proved to be less economical as they needed more feed than this region could provide and they only prospered near Limoges, where manure and fertilizers were plentiful and growing field crops was widespread.

After this the breeders concentrated on natural selection, and Charles de Leobary and his herdsman, Royer were leaders in this field developing an outstanding herd of ‘purebred’ Limousin. For this process a record of bloodlines was required and the first herd book, presided over by Louis Michel was established in 1886 for the improvement of the breed by natural selection.

The French government then established shows solely for Limousin cattle which promoted the breed and by July of 1914, the total number of animals registered in the herd book was 5,416. The herd book has been reorganized twice since its foundation, in 1923 and 1937.

Through the late 1800s and early 1900s, Limousin selected for a medium size, a dark golden-red hide with creamy undersides, a deep chest, strong top-line, well-placed tail-head and strongly-muscled hindquarter. The reputation of Limousin as meat animals was firmly established. Today, Limousin cattle are still referred to as the "butcher's animal" in France.

Increasing demand for quality beef production has led to Limousins being exported all around the world. In February 1971,179 pure-bred bulls and heifers arrived at Leith Docks in Edinburgh, and by 1986 the Limousin took the number one beef A.I. position nationally and knocked the traditional Hereford into second place. The Limousin still holds this position today.

The British Limousin Cattle Society As a spin-off of the breed’s popularity, membership of the Society is now a record 2,595 and the 18,000 mark of pedigree calf registrations was reached for the third consecutive time in 2008 when hitting 18,240. In September 2005, the Society reached its landmark 250,000th pedigree registration – with the last 100,000 registrations coming in just six years alone!

Other coloration, such as black, has been developed abroad through cross-breeding with other breeds and traits, such as polled (a genetic lack of horns) and docility have been introduced through cross breeding. No other breed association made greater strides toward improving docility than the North American Limousin.

I feel that we are lucky to have been able to live is this most beautiful region of France. Having said that we did choose the area specifically because it is rural, but doesn't pollute the air, soil and water with chemicals and there is very little traffic. Limousin has been called 'The Lake District of France' and for good reason. It's beauty, tranquility and natural variety are unmatched and yet it remains relatively unknown. Be amongst the first to discover it! Limousin: a favourite holiday destination for families

La Ferrandaise are an ancient breed of cattle from the Auvergne region of France which borders the Limousin on the east. It is a wild and tough environment, even more so than the Limousin. They are higher than the Limousin and further away from the coast resulting in more extreme winters and summers.

The Ferrandaise were kept for their milk in the past and they gave the distinctive taste to the cheeses of the area Saint Nectaire and the fourme du Forez, fourme d'Ambert and fourmes de Montbrison. Due to cross breeding and a general lack of interest, this breen almost died out. It has recently been brought back from the brink of extinction by those keen to preserve our rare breeds.

Leave your thoughts and experience about Limousin cattle here