Metabolic Bone Disease (MBD) is a result of not enough calcium and Vitamin D3 for animals, causing the loss of bone density. MBD can also be caused by too much phosphorus and/or too little protein in the diet. Cold temperature can even play a role, but the usual culprit of MBD among pet owners is the lack of sunlight and calcium. This is a serious disease that can claim the lives of animals through broken bones, misshapen skeletons, and blood clotting. This disease is too common in captive reptiles and should be treated immediately once symptoms surface.

For typical hard-shell turtles, the most noticeable symptom is the softening of the shell, along with unusual curves and deformities on the shell. For softshell turtles (whose shells should be flexible and leathery), the most common trait of MBD is the rear of the shell curving upward, creating a bowl-like shape.

My turtle seemed to have been born with MBD. When he was handed off to me a week after he hatched, I noticed he had a kind of "hunchback" look on the upper portion of his shell. The lower back curved upward slightly and there seemed to be a shallow dent in the center of his shell (midway of spine). Because I did not see any of his siblings, I did not think anything of this until his shell progressively worsened after several months. Most pictures of baby and adult spiny softshell turtles have "pancake" backs. I have seen pictures of spiny softshells with the dented spine and arched back, but their lower halves are either flat or drooped downward slightly.

Regardless if he was born with it, this disease is reversible and my turtle is living proof. All it takes is changing a few things concerning diet and environment.

This disease takes months before showing signs, and it takes the same amount of time to revert back, so have patience. The worse the curves are, the longer it will take to undo the damage.

Firstly, turtles need UV-B radiation that gives off Vitamin D3. The most common source of this is the sun. However, there are UV-B bulbs that can be purchased in just about every aquarium/pet store. For softshell turtles, twelve hours of UV-B is the minimum daily requirement. These bulbs last anywhere from six to twelve months (UV-B wise), so just remember to change your bulbs according to the box's instructions.

Your turtle should have plenty of calcium in his/her diet. In the wild, their calcium comes from the bones of fish they swallow whole, among other animals. Even if your turtle is eating minnows or guppies, there is still a risk he/she may not be getting enough. Pellets catered to baby softshell turtles are usually packed with calcium among other nutritional needs. Fish flakes are equivalent to our potato chips; they give us nothing for nutrition, and the same goes for turtles. Reptiles cannot live off of fish food, so make sure your pet is getting a varied diet. And if there is still doubt, a calcium sulfa block is a popular way to give your turtle calcium without having to feed him. Sold at a lot of pet stores, just drop the white block into the water and it will gradually dissolve for days, adding calcium into the water.

This mineral is found in most foods, especially for turtles. Too much phosphorus can prevent calcium absorption. Processed meat has very high amounts of this stuff, and that may very well be the reason why turtles should not eat cooked foods like sausage or hamburger. Meat should be raw and natural for reptiles (the only exception are pellets meant for this species). But because phosphorus is in nearly all foods, this would suggest overfeeding if your turtle's food is healthy and natural. These turtles can die by having too much to eat, so watch your turtle's amount.

Protein, like Vitamin D3, helps absorb calcium in the body. There are plenty of foods that have great amounts of protein, such as fish, worms, krill, and almost all insects. Crickets are the only bugs I know that don't have much nutritional value, especially in protein. That's not to say feeding crickets to your turtle is pointless; turtles enjoy eating live prey regardless. Just know there's no nutritional value in the cricket, so make sure to add another animal or pellet to fulfill that nutritional requirement.

Cold water can slow down your turtle's metabolism, delaying absorption of calcium. Turtles also stop eating at a certain temperature, preparing for hibernation. So self-starvation or a slow metabolism can be the result of cold temperature, preventing your turtle from getting his nutritional needs. This leads to Metabolic Bone Disease. For baby softshell turtles, mid to late 70's Fahrenheit seems to be the best range in temperature. As a newborn, my turtle would stop eating once it got as low as 72 degrees.

Your turtle should be in top condition if you provide it UV-B (Vitamin D3), calcium, protein, and the right temperature for its habitat. Vitamin A is also an important part of a turtle's diet (it helps their eyes). Special pellets and frozen red bloodworms have a good amount of Vitamin A in them.

Beware of overfeeding. Before you stuff your turtle with as much protein as you can (if he/she is suffering from MBD), too much protein can also damage your turtle and can even deform his/her shell as well. What it all comes down to is a balanced, varied diet. Feed it regularly, but not in large quantities. Meals should be more like snacks, especially if they can hunt for his/her food without your assistance. Just be patient and by following these guidelines, your turtle's shell should change in time and it will be healthy again. 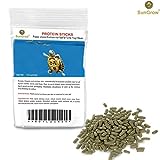 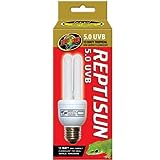