Is My Hamster Pregnant - Questions About Pregnant Hamster

It's not uncommon to purchase a female hamster from a pet store and it have babies. It's actually pretty common especially in places that have community hamster enclosures. Having a littler of hamster babies just isn't ideal for most people, especially when it comes to, "what do I do with the babies?"

If your hamster is pregnant, you can try to return the babies to the pet store that you purchased the hamster from, you can give them away to friends, or keep them yourself. What you do with the babies is up to you. What's important is preventing a litter if you can help it, which is why it's important to house same sex pairs or keep hamsters individually housed (best case scenario especially for Syrian hamsters).

When can my hamster get pregnant?

Female hamsters have a 12 hour period in which she can get pregnant, but that 12 hour window occurs every four days.

How old does a hamster have to be to become pregnant?

Females hamsters are sexually mature as early as 4 to 5 weeks old, which means at that time they can become pregnant.

Do I leave the male in with the female?

Depending on the species of hamster, will determine if the male should remain with the female or not. Winter White hamsters will block a pregnancy if the male is removed, whereas the other hamster species may experience aggression.

Syrian hamsters are always best when housed by themselves, so removing the male won't hurt a thing. Female Chinese hamsters will become very aggressive, so she will need to be removed after a few hours of being with the male. Campbell's hamsters will be ok living together, and Winter White's must be left together in order to have a valid pregnancy, if that's what you're looking for.

Is she really pregnant?

The female hamster will get fatter, especially after 10 to 18 days after mating with a male. Some species, like the Syrian hamster, may spend less time exercising on the wheel and more time making a nesting area. Pregnant females will generally stay on the ground level of the cage.

When will she have the babies?

It takes and average of 15 to 21 days after mating for the female to have her babies, depending on the species of hamster. (See the chart below.)

What can I do to help her?

Leave the hamster alone as much as you can. Make sure that she has fresh food and water. Try to offer fresh vegetables like broccoli and carrots so that the female hamster can boost her nutrition and keep a balanced diet for the babies growing inside her.

Why did the hamster eat her babies?

Female hamsters will eat their young if they feel they are threatened. If the mother is sick, she may eat the young. Stress seems to be the most common cause of a mother hamster eating her young.

Female hamsters will eat their babies any time from the day they are born up until about 14 days, although the odds are higher that within the first few days she will eat the young versus a few weeks old.

How to prevent a hamster from eating her babies?

The best thing that you can do to attempt to prevent the mother hamster from eating her babies is to leave her alone. Do not gawk at the babies, try to remove them or the mother, or fiddle with the cage. Leave the cage alone; put food in the cage and check water; and try to reduce the amount of stress on the mother as much as you can. Ensure that the cage is in a quiet room where no other pets can harass her, and try to ensure that the temperatures are not too hot or too cold. How To Sex Baby Hamsters

It is easier to tell the gender on hamsters when they are a little older, as the males will have very large and pronounced testicles. Plus, the anogenital distance (distance between anus and penis) will be greater on males than with females. 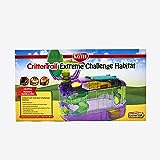