Are Dog Prong Collars Bad to Use? Here's the Good, the Bad and the Ugly

What are Prong Collars?

Prong collars, also known as pinch collars, are training tools meant to help stop a dog from pulling and obtaining better control. Unlike a normal collar, they're made of metal interlocking links equipped with blunt prongs meant to tighten as the prongs embed into the dog's skin.

As such, the prong collar is meant to deliver a correction, whether delivered by the handler or as an "auto-correction" derived from the dog's pulling.

Prong collar proponents often advocate their use because their belief is that it carries out a correction similar to what a mother dog will do to her pups. In other words, they believe the prong's effect on the dog's skin mimics when mother dog opens her mouth to correct an unruly puppy with her teeth.

Mother dogs first of all, DO NOT use their teeth to apply pressure on both sides of the neck to correct their youngsters. If they did, they would cause considerable harm! Also, unlike a cold, uncomfortable prong collar, a mother is a source of warmth, nourishment and safety for the pups so the comparison doesn't hold up at all.

Also, it's important to note that they are not harmless as thought; they can cause physical and emotional damage that we will see in the next paragraph.

Amount of PSI exerted on dogs

Let's start with the good, prong collar proponents claim that prongs work very well and that its effect is like power steering. I want to be honest about it: they are right as I must confess I have used them in the past--but would never, ever use them again!

The prongs indeed work quite well, but there are many drawbacks, you need to be aware about both at an emotional and physical level. Let's start with the emotional scars the use of coercitive training tools may leave.

First of all, a step back into learning theory may help grasp the mechanisms going on here. It's often forgotten that dogs learn in two ways, through operant conditioning and classical conditioning.

Prong collars work mainly by inflicting discomfort/pain. If they didn't work that way, they didn't have any other function than encircling a dog's neck.

Passive correction takes place when the dog pulls on the leash, in other words, the dog receives an "auto-correction" since upon pulling, the strain on the leash causes the prong collar to tighten around the neck.

When your dog lunges towards other dogs, you may feel compelled to deliver a correction, or your dog may get an "auto-correction". In this case, your thought is that Rover will associate lunging with the pain and therefore, should stop lunging. But there's more into that.

First of all, Depending on the dog's pain threshold/situation (when dogs go through adrenaline surges as it happens during fight or flight, they may have reduced perception of pain/discomfort), this may or may not result in reduced pulling behavior.

Secondly, lunging is simply an outward manifestation of an internal turmoil. Correction after correction, your dog will learn to associate the presence of other dogs with the pain of the collar. As Bob Bailey states: "Pavlov is always sitting on your shoulder."

And I truly believe that because as a behavior consultant, I had my fair share of fixing aggression and anxiety that has increased due to corrections rather than decreasing. The fallout for using punishment-based tools is there and well alive.

It's not rocket science. Imagine you're terrified of cats. If a friendly cat goes near you, you may stomp your legs loudly and do a hissing sound to scare him off (which is similar to what a dog is doing when, he is often trying to make the other dog away through lunging and vocalizations).

Now, imagine employing a therapist who slapped you on the face every time you stomped your feet and hissed upon seeing a cat, do you think that would ultimately remove your fear of cats? Not at all, you may actually have an increase in fear, because not only do you have to worry about the cats, but also of being slapped in the face! And of course, you would also definitively change therapist!

Dr. Soraya V. Juarbe-Diaz, DVM, DACVB, CAAB, explains “I can stop any behavior, but I am more interested in teaching my students, animal or human, to choose the behavior I want them to perform because they can trust me, because I do not hurt them and they are safe with me, and because the outcome is something they enjoy. Mistakes are inherent in any type of learning — if I continually frighten or hurt my students when they get something wrong, eventually they will be afraid to try anything new and will not want to learn from me any longer."

How true is that?

Back in time, oddly prong collars were offered as a better option than choke collars, but the truth is that they can also deliver damage and aren't as innocent as thought. Jim Casey, a Mechanical Engineer explains in "The Pet Professional Guild" how when a dog pulls against a collar he's capable of exerting more force than his own weight, especially if he's running at the end of the leash.

With a flat, regular buckle collar he estimates an 80 pound dog to exert a contact force of approximately 5 pounds per square inch (psi). With a nylon choke collar, we're talking about 32 psi, and drum roll please, an astounding 579 psi when a prong collar is used, which greatly increases the risks of injury to the dog.

This explains why Austria and Switzerland have banned its use and why many dog trainers, behaviorists and veterinarians are concerned about their use. Veterinarian and thyroid expert, Dr. Jean Dodds claims that prong collars can easily injure a dog's thyroid as well as the salivary glands and salivary lymph nodes.

The solution that has helped my clients 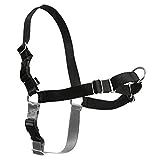 PetSafe Easy Walk Dog Harness, No Pull Dog Harness, Black/Silver, Large (EWH-HC-L-BLK)
After a decade of training dogs, I have abandoned prong collars for many years and have substituted them with front-attachment harnesses. My clients who use them are happy to report that they offer more control without the risks for damage and pain as it happens with corrective devices such as prong collars, therefore making them feel more confident on walks with powerful dogs. Of course, use of these harnessed must be accompanied by training.
Buy Now

The Extra Good, There are Better Ways!

One of the things that irritate me the most as a trainer is that half the people who use prong collars, don't even have a clue how to fit them correctly and how to use them. I have seen people using prongs report to me that the prong fell apart and came off, then I have seen people yanking them without even teaching the dog what to do to avoid the yank and how to get out of the correction.

Obviously, I am not a proponent of prongs and have abandoned their use several years ago, when I found better ways to control powerful dogs and train them appropriate behaviors. Because prongs, choke and shock collars, don't teach, they only correct.

James O’Heare, professional Animal Behavior Consultant, claims the use of "choke chains, prong collars and other devices prong are "a Band-Aid solution that, again, does not address the actual problem". Their use can result in depression, disempowerment, redirected aggression and deterioration of social relationships to just name a few.

"Were people to understand more about how dogs communicate and how these collars work, they would appreciate that responses other than pain and pressure are more desirable for changing an animal’s behavior" explain M.Ed., C.C.B.C., CPD Angelica Steinker and Niki Tudge and founder and owner of The DogSmith, in an article for the Pet Professional Guild.

So what are better ways? I am a big proponent of front-attachment harnesses, such as The Easy-Walk Harness, Sensible Harness and Freedom Harness, but not as a long term solution.

My ultimate goal is to teach a dog to walk on a loose leash using a buckle collar. If I find at the end of classes, dog owners are still depending on training aids, I know I have failed somewhere or the client hasn't followed through.

Reputable Trainers Explain How to Use a Prong Collar Correctly!

Prong Collars: would you use them?