Pros and Cons of Chemical Castration in Dogs

Owners of male dogs that are considering castration in order to prevent behavior issues, health issues, along with the risks of increasing the dog over population problem, nowadays have another not to well known alternative to the well popular surgical procedure. Indeed, there is the option of having male dogs castrated through a procedure known as ''chemical castration''.

According to Petplace.com chemical neutering is accomplished through the use of Neutersol,an FDA approved injectable solution also known as Zinc Gluconate/Arginine. During chemical castration, the dog's testicles are injected with this solution which causes the dog's testicles and the prostate to atrophy causing sterility in 99.6% of dogs.

The great part is that such procedure lasts for only a few minutes and best of all does not require anesthesia, therefore such procedure may encourage people that do not neuter their dogs because they are simply fearful of having their dog go under. However, because the injection must be placed properly in order to work, dogs that fear needles or dogs that tend to struggle may require a sedative to carry out the procedure.

The procedure can be done in dogs ranging from three to ten months of age. While highly effective in making the dog sterile, the procedure still allows the production of sperm for the first sixty days, therefore they should be kept away from intact females during this time.

A major drawback is that the hormone testosterone continues to be produced even though if not at the level of intact males. This means that dogs may still be capable of developing diseases such as prostate cancer and testicular cancer and also that some typical male behaviors such as marking and roaming may be continue to persist.

The main issues that may be encountered during the procedure is pain following the needle prick and afterwards a few dogs may vomit, develop irritation in the testicular area and/or develop lethargy, diarrhea and swollen testicles.Such symptoms tend to subside.

Because the procedure is done through the injection of a chemical solution there are no sutures. However, dogs should be monitored afterward to prevent them from licking at the treated area. An Elizabethan collar may come handy in this case. Also the area should be monitored so any signs of discharge or irritation can be reported to the vet promptly.Puppies should also be refrained from running and jumping for the first seven days.

***Update: Neutersol was produced in 2003 and was pulled off the shelves after two years due to business reasons. However, it is expected to be produced again in the near future. Updates can be available from the Alliance for Contraception in Cats and Dogs website. 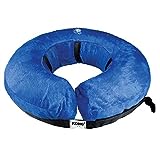