Red Algae : Getting Rid Of Red Algae In The Aquarium

This is a guide on red algae control in marine aquariums. Popularly known as red slime algae, it is actually not an algae at all. It is a Cyanobacteria like spirulina is.

They are fully photosynthetic and are the devil to deal with once they start getting out of hand. Cyanobacteria, brown algae, hair algae and dinoflagellates are 4 of the biggest problem algae marine aquarists face. 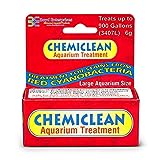 If you're looking to purchase red slime removers and are unsure if they really work then i'll go ahead and say that they work. But they don't address the cause of this infestation. Red slime will simply come back if used on its own. You can however, use them to accelerate the process. Chemi-Clean by Boyd Enterprises is by far the best slime remover on the market.

The appearance of pest algae in a saltwater aquarium can almost always be traced back to elevated nutrients. Nutrient control is how we're going to tackle red slime algae.

The two nutrients we are going to be concerned about are nitrates and phosphates. Both of them are constantly being produced in an aquarium.

Fish waste, fish food, detritus and anything that is rotting slowly in the tank contributes to nitrates and phosphates.

Lets start with fish waste. The more you feed, the more waste so we should begin by feeding smaller amounts at longer intervals. Uneaten food in the tank is less of a problem by feeding less as well.\

Next, we have to manually remove as much red algae as we possibly can. With red slime algae it isn't too difficult as they tend to form carpets that can be removed with ease. Scrape your live rock, glass, pumps and any other surface they are growing on. Make sure too remove any floating bits of red algae as well.

Clean up the entire tank by removing any detritus and uneaten you find.

Nitrate is removed primarily through water changes so perform as many as needed. Aim for a reading of zero. While phosphates are also removed during water changes, they tend to bounce right back within a day or two.

Employing phosphate removal media is highly recommended. Put it in an area of high flow. Follow the instructions and put the appropriate amount according to your aquarium size. Your phosphate levels should read zero in 48 hours.

If your bulbs are older than 6 months then you should change them. As bulbs age, the light emitted will slowly start changing in spectrum. In the case of reef lighting, they start entering the red spectrum.

And the red spectrum, is where all pest algae really thrive. Cut down your photoperiod to 4-5 hours a day.

Red slime algae really does not do well in high flow. If you notice where the majority of growth is taking place, it will probably be in a very low flow area.

You must increase flow to these areas immediately.

If you do all of the above then you are well on your way to getting rid of this pesky problem. But you must be patient, don't expect any real results after a few days. Getting rid of cyanobacteria takes weeks of diligent care. Follow these steps for a month and you'll likely be rid of red slime algae.