The Red Breasted Merganser is a saw-billed duck which has been allocated the genus name of Mergus, a Latin name indicating a water bird and the specific name of serrator from the Latin serra=saw.

In the UK is placed on the Green list of conservation concern { no current concerns} with an estimated number of 2,200 pairs in summer,with an estimated winter population of 8,000+. In Ireland it is also green listed and in Europe it is not a species of concern with an estimated population size of between 68,000- 108,000 pairs with the highest populations being in the Scandinavian countries of Norway,Denmark and Sweden.

The Gaelic name for the bird is Solta-dhearg, the Welsh Hwyaden Frongoch and the Irish Solta-rua. It breeds on the fresh water lakes across Europe,Asia, Greenland, Iceland and North America. { Source the BTO }

What is a merganser?

The Mergansers referred to as saw-bills are a quality species,a sub-section of the duck family Anatidae. Only one of these so called 'sea-ducks' is truly a sea farer, the others favouring rivers and lakes.

The name Merganser is said to be derived from the German naturalist,Gesner in the mid 16th century,which comes from a combination of the Latin names mergus=diver+ anser =goose.

There are six species of merganser { three of which occur in North America}, these are the Common merganser Mergus merganser, the species referred to as the Gooseander in Europe, The Red breasted merganser { the subject under review}, the Hooded merganser Lophodyytes cucullatus, The Smew, Mergellus albellus,is the smallest of the so called saw-bills. The Chionese merganser Mergus squamatus,which is currently though to be vulnerable or endangered and the Brazilian merganser Mergus octosetaceus, which is the most threatened species of all of them with an estimated population of between 200-250 birds left.

Here we review the Red breasted merganser, and as always we commence with a description of the our subject.

Description of the red breasted merganser

The adult male has a filamentous double crest of green feathers. The head and upper neck, black with green and purple reflections. The rest of the neck white with a band of black running down behind. The lower neck with a deep belt of reddish brown, splashed and spotted with black. The rest of the lower parts, including breast,are cream white,tinged with buff. The lower back is a light ash-grey,undulated with black.

There is a tuft of feathers at the shoulder, white, broadly edged with black. The inner scapulars are black, the outer white,crossed with black. The bill is orange-red and serrated, the irides are red. tarsi and feet orange, they are about twenty two inches long and weigh two to three pounds.

The female closely resembles the male but is relatively smaller. She has the back brown instead of blue grey,as in the Gooseander. It is thought that the male birds do not attain full adult plumage and double crest until they are in their fourth year.

The birds are at home on both fresh and salt-waters and they are most commonly seen around the UK's coast line in winter. They are gregarious,forming flocks of several hundred in the Autumn. The UK breeding population is concentrated in the north west of Scotland, England and Wales,and, in part of Northern Ireland.

Here in the UK the birds start to flock on the coast from July, reaching a peak in December. Birds from Northern Europe also arrive in late Autumn. They return to their breeding areas in March.

In North America the species generally extends further north. They breed over most of Alaska including the Aleutian Islands, they are most abundant on areas adjacent to the Bering sea. The bulk of the red breasted merganser populations that breed in the interior of North America migrate to wards the Atlantic and pacific coasts before reaching their wintering grounds, though a small number migrate to the Great Lakes. Some remain there for the winter, but many continue further south to wintering grounds along the Gulf coast and probably along the Mid-Atlantic coast. There are records of these birds flying south from Canada across the Great Plains to winter along the Texas coast. They also winter in Washington but they breed further north.

Butler 'British Birds and their Eggs ' 1896, relates the following observations. " I know of no more beautiful a sight than to watch a party of Merganser's on the feed. I have seen them in waters perfectly smooth and in heavy sea. Every motion is instinct with life,grace and imperceptible action. In diving they seem slightly to elevate the front of the body as if gathering impetus and then disappear instantly without any apparent effort or trouble of the water. They rise to the surface as easily as they go down,and if a fish has been captured it is brought up cross ways in the bill,adjusted and swallowed. In a heavy sea they dive through the advancing waves,coming out the other side and riding as buoyantly as a cork,as if born to rule the waves"

Mr. Graham of Iona,made these notes on the red breasted merganser-" A very pretty sight they make in some rock embosomed creek, a party of some half dozen, including one splendid male. At one time they float upon their own reflections imaged on the dark blue water, then as if by word of command, they all leap down together into the depths below. After a minutes interval, they pop up again to the surface,emerging with great buoyancy. They are now a little scattered,so they converge upon their gallant admiral, whose bright, party-coloured plumage is further set off by the rich, soft shades of chestnut which form their own colouring. They advance with great swiftness through the water,without any visible effort or motion of any part of the body. The long slender neck is kept erect and motionless, except to turn the head and long coral bill gracefully round, as if the bird looks about suspicious of any danger"

The birds can walk relatively fast if somewhat ungraceful in their movements and they fly in a buoyant and easy manner. The red breasted merganser hold the aerial record for the fastest level flight at one hundred miles per hour {161 km/h} { Source 10,000 birds.com }

Their food consists of small fish from both salt and fresh water,shrimps,marine worms and crabs and sand eels. they will also take beetles,water insects and their larvae,worms and frogs. They will also take advantage of salmon and trout,which has brought them into conflict with game fishermen.

The flesh of the merganser according to Butler is " rank and fishy,and unpalatable even to a hungry man"

Merganser and her brood 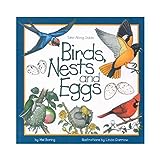 The places chosen by this species for nesting purposes are the vicinity of the sea, and the neighbourhood of lakes and rivers among reeds and rushes. The nest site varies greatly from country to country and the location chosen. In North America they have been encountered nesting in marshes,rocky inlets,on vegetated islands in large lakes, in bank recesses and under piles of driftwood. The average clutch in North America is between five and eleven eggs.

The nest of the merganser is placed on the ground,generally,but not always, near water. It is well concealed in herbage,with a foundation of coarse dead herbage,and lined with feathers and whitish down from the birds breast.

In Norway there are records of the nest being placed under the shelter of a young spruce where the lower branches sweep the ground. Mr.Saxby records that the merganser,when nesting in Shetland {Scotland}, seems to prefer something in the form of a roof, or under a rock,a rabbit burrow or a crevice in an old loose wall.

The eggs which number from eight to ten are cream coloured or light buff,sometimes with an inclination to green. The eggs are incubated by the female a task which will take her some thirty two days to complete. The male does not appear to trouble himself about his family and only rejoins them in the winter.This fact accounts for the females and young being encountered in one place and the males in another.

When the young break their way into the world they are born with their eyes open and leave the nest within one or two days of hatching. When first hatched the young are dark brown above and white below, the sides of the neck are a reddish colour. The young males afterwards resembles the female,but is brighter coloured.